Kalervo Kummola says direct words about the flag ride of Rene Fasel and the Mayor of Riga: “Childish moped show”

According to Kalervo Kummola, the moped will show off both at Riga City Hall and at the International Hockey Federation. 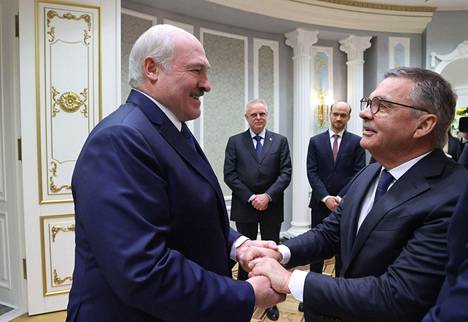 On Wednesday, Kummola calculated that he would comment on matters related to state flags for the first time in his decades-long career as a sports influencer.

On Monday, the authorities of the Latvian capital and the World Cup, Riga, led by Mayor Martins Stakis, decided to secretly lower the Belarusian state flags outside the World Cup and replace them with the country's opposition symbol, the white-red-white flag that was previously the official flag of Belarus.

This was initiated in protest at the fact that a plane carrying a Belarusian opposition activist was forced to make a stopover in Minsk on Sunday by a fabricated bomb threat, where the activist was arrested.

Rene Fasel, chairman of the International Hockey Federation IIHF and a friend of both Russian and Belarusian presidents Vladimir Putin and Alexander Lukashenko, urged the mayor of Riga to immediately return Belarusian state flags to the competition.

- When it was not agreed, Fasel had then demanded that the IIHF tickets be removed as well.

If I say it straight, then the whole hustle and bustle feels like childish moped riding, Kummola, who is traveling to Riga on Sunday, said.

He mirrors Latvia's response over a short period of time.

- The interesting thing here is that very recently Latvia had to organize these competitions with Belarus.

- I told a friend that yes there is something in between that is often called the EU's external border and, in general, the border between us and the great unknown.

I'm guessing that now that statement from a guy wouldn't come off even with glitter.

Rene Fasel (right), President of the International Hockey Federation, visited Minsk in January to wash the back of Belarusian dictator Alexander Lukashenko.

In January, the IIHF decided that Belarus would not be the World Cup host in the country’s current political situation, which was strongly condemned by the international community.

It is known that the Belarusian team is not going to react to the situation, for example by leaving the Games.

- There has been some flirtation there, but leaving the team would mainly shoot itself in the leg.

Kummola reminds that the IIHF has no say in its competitions until a certain point:

- The Latvian state and the city of Riga decide what is put there in the front of hotels or parks and what is not.

Race arenas are then more under our control.

They have, as far as I know, the official flag of Belarus still on display.

Kummola has watched the World Cup matches with pleasure.

According to Kalervo Kummola, mopeds in Riga are currently on the other side.

- 15 out of 16 countries have already scored points and it would probably be Italy if Korona had not spread so badly in the team.

In Latvia, municipal elections will be held in the first week of June.

Although Riga elected its own city council last year and will not participate in the elections, Kummola believes that the World Cup will also be used for election policy purposes.