"Discuss the state of relations": Putin and Biden will hold talks in Geneva on June 16

Russian leader Vladimir Putin and US President Joe Biden will hold talks on June 16 in Geneva, the Kremlin press service reported. The heads of state will discuss issues of strategic stability, the development of bilateral ties, the fight against the coronavirus pandemic and regional conflicts. In turn, the White House said that they intend to "restore predictability and stability" in relations. 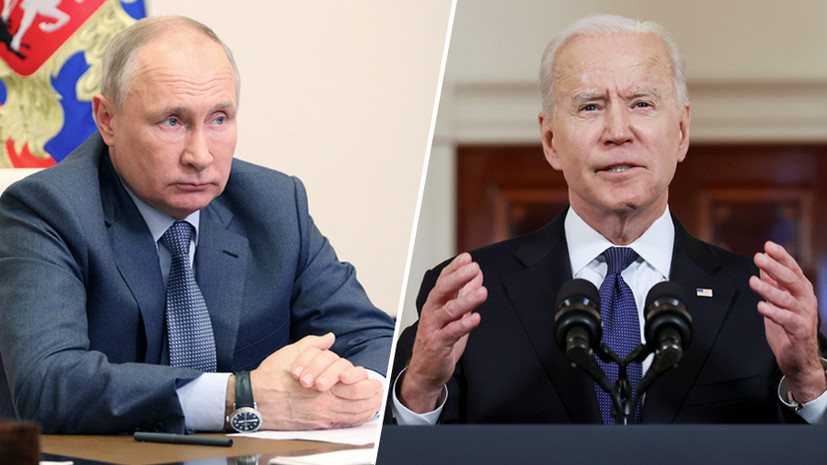 Russian leader Vladimir Putin and US President Joe Biden will hold talks on June 16 in Geneva.

They clarified that during the meeting it is planned to discuss such topics as "the state and prospects of further development of Russian-American relations, strategic stability issues, as well as topical issues on the international agenda, including interaction in the fight against the coronavirus pandemic and the settlement of regional conflicts."

The information about the meeting was also confirmed in the White House.

Press secretary Jen Psaki in a statement noted that Washington is seeking to "restore predictability and stability" in relations between countries.

During the briefing, Psaki also called the meeting of the presidents "vital" to protect American interests.

According to her, the American side expects the leaders to discuss the issue of arms control after the extension of the new START Treaty, as well as issues of the situation in Ukraine and Belarus.

At the same time, the press secretary of the Russian leader Dmitry Peskov said that the details of the meeting between Vladimir Putin and Joe Biden have yet to be agreed upon.

Swiss Foreign Minister Ignazio Cassis praised the upcoming meeting of Russian and American leaders, noting that Switzerland is "committed to dialogue and diplomacy."

German Chancellor Angela Merkel also said that she would be glad if such a meeting took place, noting that such negotiations were held even during the Cold War.

"Diplomacy will have a chance of success only if there is a dialogue with each other," TASS quoted her as saying.

In turn, the former president of the USSR, Mikhail Gorbachev, expressed the opinion that Putin and Baden "have something to talk about, especially considering that much has been destroyed in matters of strategic stability."

“Now the White House has a different president, and you can negotiate with him.

Trust must be built.

The former team turned out to be unreliable, ”Interfax quotes him.

On April 13, Putin and Biden held a telephone conversation, during which they discussed the current state of relations between the countries, as well as the possibility of holding a personal meeting.

As reported in the Kremlin, during the talks, Biden expressed interest in the normalization of bilateral relations, as well as in stable cooperation on a number of acute problems.

Later, Dmitry Peskov noted that the United States offered Russia to hold a meeting of presidents in one of the European countries.

Three European states - Austria, Finland and the Czech Republic - announced their desire to provide a platform for negotiations.

Recall that another reason for the aggravation of relations between states was the statement by Joe Biden, made by him in March during an interview with ABC News.

Then the US President answered affirmatively to a journalist's question whether he considers Putin a "killer".

In addition, the American leader said that Putin would "pay the price" for the alleged "influence campaign" on the 2020 US presidential election.

At the same time, Biden did not specify exactly what steps he was going to take.

In Russia, it was then noted that Biden's statement was beyond common sense and represented "a hysteria from impotence."

The Russian embassy also reacted to Biden's words, noting that the ill-considered statements of American leaders threaten the collapse of the already "excessively confrontational relationship."

At the same time, the official representative of the Russian Foreign Ministry, Maria Zakharova, said that the Russian ambassador to Washington, Anatoly Antonov, had been invited to Moscow for consultation and analysis of Russian-American relations.

Kremlin spokesman Dmitry Peskov then described the current bilateral relations as "very bad" and reminded that the question of how to improve them should not be asked of Moscow.

At the same time, Vladimir Putin himself, commenting on Biden's words, wished him good health and drew attention to the fact that many people tend to transfer their own qualities to others.

He stressed that Russia will develop relations with the United States, but in those areas in which it is interested in itself, and on those conditions that it considers beneficial.

In addition, Putin invited Biden to hold talks on the air.

“In order not to dive like this in absentia ... We must continue our relationship.

And what's more, now I was thinking about this.

Last time, the initiative for the telephone conversation came from President Biden.

I would like to invite President Biden to continue our discussions, but on condition that we do this actually live, as they say, online.

But without any delay, but right in an open, direct discussion, ”Putin said.

The White House then referred to the excessive workload of the American president.

However, later, Biden himself said that "at some point" he would talk with Putin, but did not indicate specific dates.

In May, US Secretary of State Anthony Blinken said Washington was not looking for escalation and would prefer a more stable and predictable relationship with Moscow.