Comment: Howling at the World Cup disaster is foolish - rattling lions and other great powers is the best thing since Tam's urotion

Decades ago, Finland followed the same path that Kazakhstan and other hockey “small countries” have now taken. 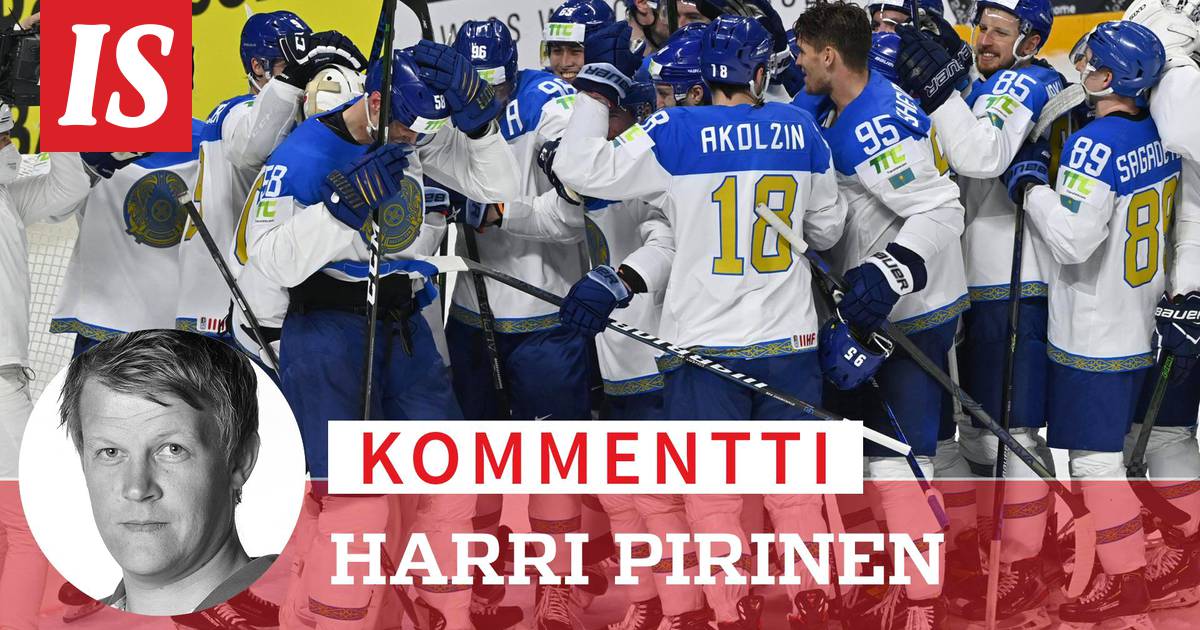 Among other things, such terms have been read in the Finnish and Swedish media yesterday and today.

Because in the World Ice Hockey Championships, Finland lost to Kazakhstan 1-2 times after the penalty shootout and Sweden has started the matches with shock losses against Denmark (3-4) and Belarus (0-1).

In Sweden, the boots are already being tuned to the kicking position on the back of the head coach Johan Garpenlöv.

If the World Cup were to be of interest in Canada, the media in the sport's home country would also tear the headlines of the disaster after Canada shamefully lost first to Latvia, the host country of the Games, 0-2 and then crushingly 1-5 to the United States.

These results, and the “winning streak” of two matches in Kazakhstan, among others, are the best that has ever happened to hockey - at least since Juhani “Tami” Tamminen almost immersed himself in the Soviet Union on December 12, 1971 in Moscow.

This is what we have always wanted, even insisted on!

That the level of hockey would spread and (almost) every match of the World Championships would become really interesting.

Hockey has long had to listen, much without reason, to the ridicule of football fans, for example, for being really practiced in five or six countries.

That has never really been the case.

It is quite different whether a sport is the undisputed number one sport in a country - like hockey only in Finland and Canada - than whether it is taken seriously.

Many remember how already in the 1970s East Germany was Finland's recurring nightmare, it was also difficult with Poland, and at the 1988 Calgary Olympics, for example, Finland lost its opening match to Switzerland.

For example, the Swiss Main Series has in many respects overtaken the SM League, and the national team played in the World Championship Finals 2013 and 2018.

With the break-up of the Soviet Union, the Eastern Bloc has become many notable disc countries.

For example, the Kazakh national team is practically the KHL team Barys Nur-Sultan.

What a wonder it is that groups made up of players playing in the main leagues of Finland or other European countries are tough against KHL players let alone teams?

For example, Germany has rolled into two sovereign victories in these competitions with Finnish-American teachings.

With the help of head coach Toni Söderholm, Finland's 1995 gold hero Ville Peltonen and Matt McIlvane, who has already been a member of the Olympic silver team's coaching team, played.

Coaches from “big” puck countries have been spreading species knowledge to emerging countries for decades.

That is how things should work.

For years, coaches and players have been trying to tell me that there are no throwing bags and easy games - as there should be in World Cups - but the message has sunk badly.

Now, at the latest, it is worth believing.

For a long time, hockey has been played “seriously” in well over ten countries.

That, too, is little globally, but a little thing like the ice prefix delimits a pretty large part of the globe out of the species.

The 1991 World Cup hosted by Finland was the last to be played with eight teams.

Since then, it has been played six times with twelve teams, and since the 1998 Swiss Games, 16 teams have been involved.

For a long time, such a large number of teams was considered madness.

Far too many useless games, complained.

Why so many, asked.

Because more countries are allowed to play and measure their level against the best, learn, evolve, and slowly challenge the bigger ones and thus spread the sport and improve the level of the World Cup.

The results will be seen now.

The Lions have followed the same path.

Finland's first major victory was to defeat Czechoslovakia 3-1 at the Vienna Games in 1967. The following year, Canada fell 5-1 for the first time at the Grenoble Olympics.

Sweden was defeated at the World Cup level for the first time in Stockholm in 1970, and the Soviet Union collapsed in the already mentioned match of the Izvestija tournament in 1971.

Still, it lasted until 1988 before the Lions won their first medal of honor, and it wasn’t until 1995 that the coveted World Championship came.

Finland is now one of the world's leading hockey countries.

The path began to be cleared more than 50 years ago, one step at a time.

After the 1995 World Cup gold, some seriously suggested that the World Cup helped Finland emerge from the recession.

No facts have been presented to support the claim, but at least the mental climate in Finland changed when the eternal loser finally won.

Since then, there have been 16 medals in 25 years.

One can only imagine what a positive, unifying effect the great victories of the forthcoming Games will have, for example, in the host country of Latvia, in the dictatorial rule of Alexander Lukashenko in Belarus (from which the Games were taken) or in Kazakhstan.

Especially if they advance to medal games, medals or even… well, don’t go crazy now.

Besides, it has been lost to the “small lands” in the early series in the next few years before.

Finland lost to Latvia in Minsk in 2014, but reached the final.

In Paris 2017, there was an ugly 1-5 loss to France, but the Lions escaped the bronze medal.

In 1992, Sweden played 0–0 in the opening series with Italy and lost 2–5 to Germany, but won Finland in the final.

When Finland won gold in 1995, the order of the second first block was Russia, Italy, France, Canada.

So far, the “big ones” have usually somehow saved their skin.

But it is inevitable and highly desirable that a new name (s) will soon be added to the list of eight countries, last updated in 2002.

Maybe not this year, but definitely this decade.

What could be nicer for a sport than value competitions where every match is really interesting and no result is a surprise, let alone a fiasco or a catastrophe?