The United Arab Emirates welcomed the ceasefire agreement between Palestine and Israel and expressed its hope that it would continue to contribute to restoring calm and building confidence among all parties, and thanked the Secretary-General of the United Nations, António Guterres, for his call for an immediate ceasefire and his call for 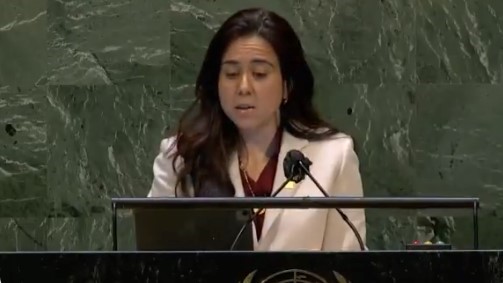 The United Arab Emirates welcomed the ceasefire agreement between Palestine and Israel and expressed its hope that it would continue to contribute to restoring calm and building confidence among all parties, and thanked the Secretary-General of the United Nations, António Guterres, for his call for an immediate ceasefire and his call to start a political dialogue and to exercise maximum restraint. .

Ambassador Lana Nusseibeh began the statement by expressing the UAE's condolences to the families of all the victims and said that the events of the past two weeks reminded us of the urgent need to hold a diplomatic dialogue aimed at finding a long-term solution to end the conflict.

In this regard, she added, "The ongoing violence in the past two weeks and the increasing number of civilian casualties show the necessity of intensifying international efforts to find a just, comprehensive and peaceful solution to the Palestinian issue in accordance with Security Council and General Assembly resolutions."

Nusseibeh expressed her grave concern about the practices that have been committed against the Palestinian people since the beginning of May in violation of international law, including in the Al-Aqsa Mosque and in occupied East Jerusalem, and the forced displacement of Palestinian families from the Sheikh Jarrah neighborhood, which led to civilian casualties among them. Women and children.

Lana Nusseibeh emphasized the fundamental importance of preserving the historical identity of occupied East Jerusalem, in compliance with the relevant United Nations resolutions .. She also emphasized the right of the Palestinian people to practice religious rites and the importance of respecting the role of the Hashemite Kingdom of Jordan as guardian of the holy sites in Jerusalem under international law and the historical situation. Based.

Nusseibeh reiterated the UAE's readiness to support all regional and international efforts aimed at advancing the peace process in the Middle East and achieving the two-state solution through the establishment of an independent Palestinian state based on the borders of June 4, 1967, with East Jerusalem as its capital, in accordance with the relevant United Nations resolutions. The link, the Madrid references, and the Arab Peace Initiative.

Her Excellency expressed the deep concern that the UAE continues to have about the widespread deterioration of the humanitarian and economic conditions in the Occupied Palestinian Territory, noting that it has exacerbated with the outbreak of the Covid-19 pandemic .. She emphasized the urgent need to reach a lasting solution and stressed in this context the need to present The international community supports the Palestinian people and urgently provides the necessary vaccines and medical equipment.

Nusseibeh concluded her statement by pledging that the UAE will continue to work with its regional and international partners to achieve a better future for Palestinian, Arab and Israeli generations who deserve to live in safety and dignity in a stable and prosperous region.

And she said, "This cycle of violence must be the last .. This conflict has taken a long time and can only be stopped by reaching a real and lasting peace .. It cannot and should not leave the region’s youth from all sides hostage to an endless hatred because of inability." To admit that the bravest step that can be taken to end this hatred is for us to begin charting a path of lasting peace.