In the IS World Cup judgment, e.g. praise Marko Anttila and marvel at Antero Mertaranta's account. 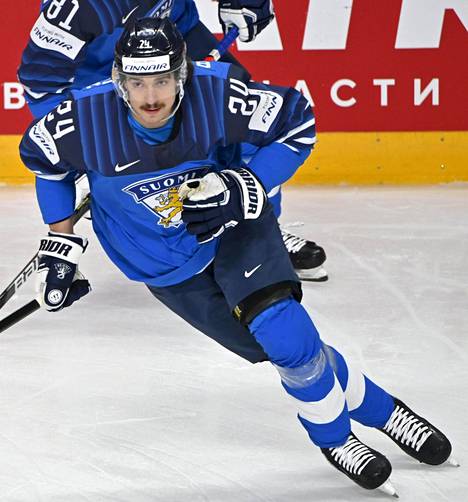 Ilta-Sanomat's World Cup jury, Sami Hoffrén, Teemu Suvinen and Harri Moisio, will focus on the burning topics of the match.

Star of the day: Jussi Olkinuora was full of iron between the poles.

Olkinuora immediately showed in the opening match why he is basically the number one guard of the Lions in this tournament.

In the second installment, Olkinuora reset the passage of Conor Garland at a critical moment.

The only beauty flaw occurred at the end of the second set when Jason Robertson’s shot slipped between the legs to the finish.

Topic of the day: Antero Mertaranta, the official lion’s voice known to the entire nation, brought a surprising addition of color to C More’s broadcast right at the start of the tournament, naming Hannes Björninen, one of the best players in the USA in the USA match.

The utterance “Bjöööönine” startled me on several occasions.

Mocha of the Day: The IIHF statistics service provided confusing data after the match.

In the second pair of lions, Ville Poka, who had a bone with Olli Määtä, was marked 5.09 in official statistics.

There is no such thing as true.

Pokka started Iiro Pakarinen's goal in the second round and was defending the lead at the end of the match.

Style of the day: The mustache man looked like a model.

Härskinen's action is drawn in front of the whole crowd with those brushes, but Björninen also showed how the center should play from one exchange to another.

An exemplary 60-meter run at the World Cup debut.

Björninen's chain was by far the best composition of the Lions.

Surprise of the day: US performance.

As the Lions head coach Jukka Jalonen stated after the match, the USA was a surprisingly good group.

Usually, in the early stages of the World Cup, a heterogeneous Yankee team slides into the pitch, focusing on out-of-match hips, but in yesterday’s match, the skating and energetic USA was strongly in the driver’s spot for 40 minutes.

Star of the day: Jussi Olkinuora was a clear number one star, but Hannes Björninen must also be highlighted.

Björninen, who played an excellent season in the Finnish Championships, proved to be absolutely World Championship level.

He struggled hard and also did great on the puck.

Led his chain in an exemplary manner.

The four-chain was the best in Finland, which is of course also a bad thing.

Topic of the day: Surprises.

This is actually the topic of the whole preliminaries.

Canada first took a hoe from Latvia, and then Denmark surprised Sweden.

These can be seen more as the top teams have colorful teams on their feet.

It’s a matter of taste, whether you enjoy this phenomenon, or whether you consider the races to be of a poor standard.

Mocha of the day: The Finns built ice and a trough in the second hall of the Games, which is normally a football hall.

On Saturday, however, it became clear that the ice is already weak.

At least in the opinion of the Swedes.

The weak ice built by Finns can become one of the topics of discussion at the Games, if it was not just a provocation by the Swedes.

Style of the day: Jussi Olkinuora's interview with C Morella, which exuded relaxation and well-being, immediately after the match.

In addition to being an excellent goalkeeper, Olkinuora seems to be a humorous and positive locker player.

If Olkinuora continues at the same level, he will become a favorite of the whole nation.

Surprise of the day: Arttu Ruotsalainen, the NHL aid planned to be the lions' first gun, was surprisingly quiet.

He is forced to improve his game in the future, as the Lions need goals and power points from the Swede.

The Swede played in the NHL as a winger but now in the middle again.

Getting used to the change can, of course, take a little while.

Star of the day: Goalkeeper Jussi Olkinuora had a tough test already at the beginning of the match.

Jason Robertson’s second-round narrowing goal went in looking pretty easy, but correspondingly a big wholesale top rescue made him the best player on the pitch.

Straw roulette, would say a 90s youngster or someone even older.

Topic of the day: Marko Anttila's choice for the competition team was criticized, but this Lempäälä fool shirt showed that he is quite rightly involved in the competition.

Although “Mörkö” only put himself in this time in the first installment of Hannes Björninen, he entered the account with the entry point to Finland's opening goal.

Style of the day: The shot that led to Atte Ohtama's 1-0 hit cut the U.S. Brian Boyle's bat so neatly in half that one could have imagined it hit a circular blade or the all-cutting hat of 007 and Bond-villain Oddjob, known from the Golden Finger.

More elegantly, one could no longer break a tool worth hundreds of euros.

Moka of the day: C More commentator Sami Kapanen stated that during the game's commercial breaks, the hall's music played so loud that the Finnish coaching management had difficulty communicating with the team's video coach.

So there was so much noise in the empty hall that the conversation was not successful.

Was this Riga Arena dishwasher special, or what?

Surprise of the day: From the opening game of the World Cup tournament, it has often been said: “the games are then opened, the games start soon”.

Now was the second go.

From the first minute, it happened and happened.

The bench athlete thanks, there was no reason to get up from the couch at any point.

Of course, I hardly would have done that anyway.