The Dutch driver from Red Bull took the full lead, taking advantage of the failure of Leclerc's Ferrari to start in front of everyone. Excellent second place for Sainz's other red. Third Norris with McLaren. World champion Hamilton is only seventh, who consoles himself with the additional point of the fastest lap. Retirement for the other Mercedes Bottas driver 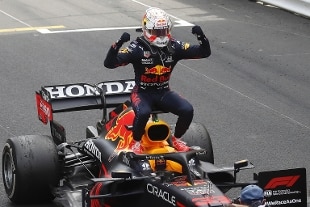 May 23, 2021Double shot of Max Verstappen in Monte Carlo. The Dutchman from Red Bull wins the Principality Grand Prix and leaps to the top of the world rankings, thanks to Lewis Hamilton's seventh place. Excellent second place at 8 ”968 by Carlos Sainz jr. with Ferrari, on a very unfortunate day, which saw the other red of Charles Leclerc stopped by a problem with a drive shaft during the reconnaissance lap: the Monegasque had to start from pole position, an exploit that the Maranello house was missing from a year and a half. Third was British Lando Norris in McLaren, at 19.427.

Hamilton's only consolation is the additional point for the fastest lap in 1'12 ”909. In the fifth round of the Formula 1 World Championship, the Mexican Perez also scored points with the other Red Bull, the German Vettel on Aston Martin, the French Gasli on Alpha Tauri, Hamilton, the Canadian Stroll on Aston Martin, the French Ocon on Alpine and Giovinazzi with Alfa Romeo.

In the overall standings Verstappen leads with 105 against Hamilton's 101. For the Dutchman, two wins against the three of the reigning world champion.

Race marked by the twist of Charles Leclerc's Ferrari: a problem on the left axle shaft that emerged during the reconnaissance lap caused the Monegasque to return to the pits, where the team decided to stop the engine. The red was back on pole after a year and a half.

"I am very sad, there will be days before it passes": this is the mood of a very disappointed Leclerc, who saw an excellent chance in the GP fade away on his home roads.

City circuit of 3,340 km in length to be repeated 78 times for a total of 260,520 km. At the start, Verstappen took the lead, followed by Bottas and Sainz, then by Norris, Gasly and Hamilton. Verstappen and Bottas are competing for the fastest laps, but the Finn from Mercedes begins to suffer from tire problems. On lap 30 Hamilton is the first to change tires. At the next lap, Bottas tries, but the right front tire gets stuck and the Mercedes driver is forced to retire. On lap 33 it was Sainz's pit stop. On lap 35 Verstappen stops and falls second behind his teammate Perez, who however makes the pit stop at the following lap, leaving him the leadership. The Dutch driver leads ahead of Sainz and Norris.On lap 69, Hamilton's new pit stop to hit the fastest lap. Positions now consolidated until the end.