The last goodbye to Francisco Brines from the Palau de la Generalitat: "He has left us a common space of love and passion for life"

The Valencian society has turned in the last goodbye to the poet Francisco Brines, the last Cervantes Prize winner who died on Thursday at the age of 89 at his home in Oliva. The... 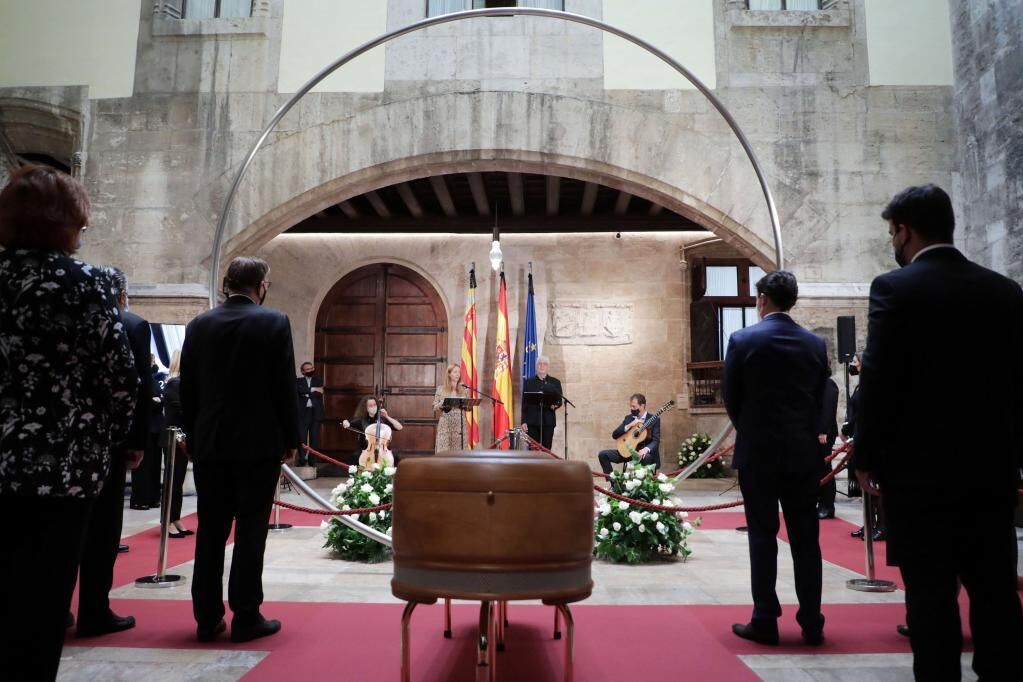 , the last Cervantes Prize winner who died on Thursday at the age of 89 at his home in Oliva. The coffin with the mortal remains of Brines has arrived this Sunday at the Palau de la Generalitat where, after an intimate tribute with relatives and authorities, the burning chapel has been opened to the public.

, in order to allow people who so wish to say goodbye to it. Brines' body has been received at the doors of the Palau by relatives of the poet; the President of the Generalitat, Ximo Puig, and the Minister of Culture and Sports, José Manuel Rodríguez Uribes; the President of the Cortes, Enric Morera, and the Government Delegate in the Community, Gloria Calero, among other authorities.

The coffin has been moved inside the Palau, where an act of homage to the poet, a native of Oliva (Valencia), has been held, consisting of a poetry recital by Vicent Camps and Lola Camps, accompanied by music. Subsequently, the coffin was transferred to the Golden Room, where family members and the highest authorities have signed the book of condolences.

The writer will be buried in the Valencia cemetery

, where the family pantheon with the remains of his parents is located.

The president of the Generalitat,

, has stressed that the figure of Francisco Brines is "a Spanish, European and universal reference", since his poetry is born "from the feelings and the reasons that unite Humanity".

Speaking to journalists at the Palau de la Generalitat, Puig pointed out that with this act the Valencian people recognize and give "one last hug to who has been, without a doubt, one of their most lucid voices."

"Today, from the feeling and affection, and from the sadness, we want to say clearly that life is a parenthesis between two nothingness, but Brines has not left us nothing, but has left us a common space of love, tenderness , of feeling and passion for life ", he highlighted.

Francisco Brines was admitted last week, one day after receiving the 2020 Cervantes Prize from the hands of the kings at his residence in "Elca", at the Gandia hospital to be operated on for a hernia, where he died on Thursday night after complicating his delicate state of health.

The Valencian Government has declared

, something that the Oliva City Council has also done, which this Saturday hosted the burning Brines chapel, through which the Minister of Culture and the director of the Cervantes Institute, the poet Luis García Montero, passed , plus many of his friends and neighbors.