In Ilomant today, 30.8 degrees - Photos: the difference between cold and warm Finland is over 20 degrees 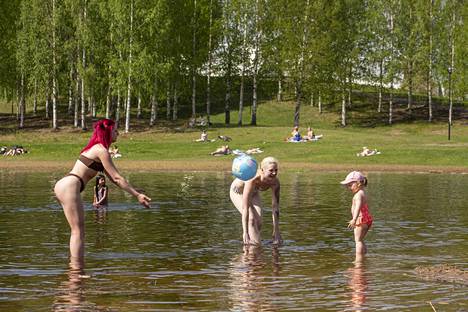 Weather history was made in Eastern Finland, when the heat record of 30 May was set at 30.8 degrees in Pötsönvaara, Ilomantsi.

Only 0.2 degrees fell from the all-time heat record in May.

At the same time, in Vaasa, which was called Finland's sunniest city, it was not far off to be cabin.

When the heat record of May 19 was sidelined in Pötsönvaara, Ilomantsi, at 5 pm, 9.8 degrees was measured in Vaasa at the same time.

In Helsinki, Kaisaniemi had a slightly higher heat of 13.8.

- The east and southeast have become warm, but in the west there is a rainy and cool air flow, Laakso says.

In Joensuu, even in the water. Photo: Studio Korento - Harri Mäenpää

Helsinki needed a jacket on Wednesday. Photo: Seppo Solmela IS

Finland is a long country and is accustomed to temperature differences between the south and the north.

East-west temperature differences of more than 20 degrees, such as those experienced on Wednesday, are still not common, but they are not entirely rare.

- The easternmost parts of Finland often get their share of the continental air, which is not affected in the same way in the west, Laakso says.

There have been four hot days in May so far, typically three.

On Wednesday, not only was the May 19 daily heat record sidelined, we went almost touching the full-month heat record, which is 31 degrees.

At that time, there was no Pötsönvaara measuring point yet, but 15.5 degrees were measured near Naomantsi in Naarva.

The Pötsönvaara measuring point, which has been in the history of weather since Wednesday's reading, is located in a small field area on the legal level of a hill rising about 50 m higher.

The open field is surrounded by a sparse deciduous forest at a distance of 20-100 meters.

The environment is largely a coniferous forest growing bog 160-210 meters above sea level, firmly out of reach of the ancient shores of the Yoldian Sea and not Lake Ancylus.

Probably a bit of a similar milieu is seen in the film Kätkäläinen filmed in Lieksa, which collects raven strikes for its own benefit and the envy of others.

In addition to mixed forests, there are small-scale arable fields around Pötsönvaara.

For this year, the chances of an all-time heatwave in May are gone.

Although there is still another week left in May, the next few days, according to the Finnish Meteorological Institute, will not allow further violations of the hell limit.

It’s even harder to say anything about summer.

One could imagine the heat of May to be somehow out of the heat of the actual summer, but that is not the case.

The arrival or non-arrival of hot days, like the probability of a throw, is an independent phenomenon.

- Based on the heat of May, nothing can be said about what the number of summer heat days will look like, Laakso says.

So it’s worth enjoying the May heat completely with sips and without fear of a cold summer when they hit.