Diplomatic efforts intensify as the bombing continues between Israel and Gaza

Yesterday, the international community intensified the campaign of diplomatic efforts to stop the Israeli bombing of the Gaza Strip and the rocket fire operations against Israel, while the Israeli air strikes displaced more than 52,000 Palestinians and destroyed or severely damaged about 450 buildings in the Gaza Strip. 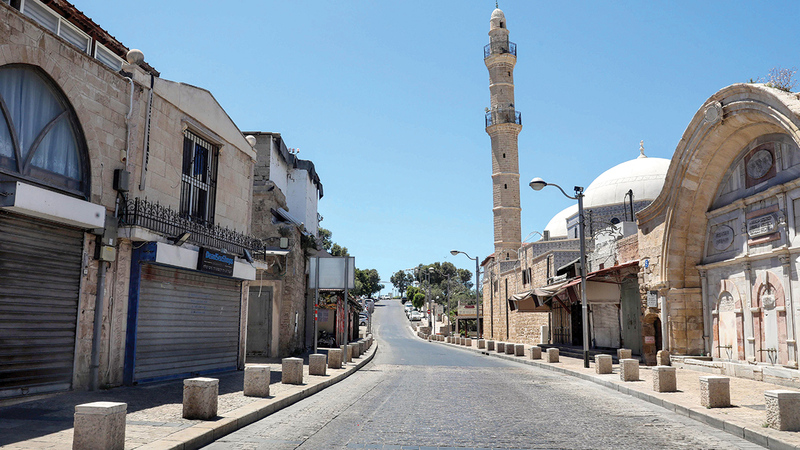 The air strikes displaced 52,000 people and destroyed 450 buildings in the Gaza Strip

Diplomatic efforts intensify as the bombing continues between Israel and Gaza

A general view shows closed shops in the Arab neighborhood of Jaffa, near Tel Aviv, during a general strike in mixed cities inside Israel.

Yesterday, the international community intensified the campaign of diplomatic efforts to stop the Israeli bombing of the Gaza Strip and the rocket fire operations against Israel, while the Israeli air strikes displaced more than 52,000 Palestinians, and destroyed or severely damaged 450 buildings in the Gaza Strip.

Since the start of this new episode of violence between Israel and the Palestinian factions in the Gaza Strip, on May 10, 213 Palestinians, including two doctors and at least 61 children, have been killed, in addition to more than 1,400 wounded, according to what the Palestinian Ministry of Health confirmed.

On the Israeli side, 12 people were killed, including a child, and 309 were wounded by rockets fired from Gaza.

The Israeli Air Force's raids continued at night on the Gaza Strip, and shortly after midnight the night before last, fighters fired several missiles at buildings in Gaza City, causing explosions, according to what AFP journalists reported.

The Israeli army announced in a tweet that it had counted "90 missile launches from the Gaza Strip between 19:00 Monday and 7:00 Tuesday towards Israeli territory", and that it had bombed "65 targets with 67 warplanes."

The United Nations Office for the Coordination of Humanitarian Affairs (OCHA) said that the Israeli air strikes displaced more than 52,000 Palestinians, and destroyed or severely damaged about 450 buildings in the Gaza Strip, including six hospitals and nine primary health care centers.

She added that about 47,000 displaced people have taken refuge in 58 schools run by the United Nations in Gaza.

At a time when the Security Council meets for the fourth time, the United States is still refusing to endorse a statement on the conflict between Israel and the Palestinians, calling for an "end to the violence."

US President Joe Biden, accused in his circles of lack of firmness towards Israel, expressed his support for a ceasefire, during a phone call with Israeli Prime Minister Benjamin Netanyahu.

But the confrontations continued, and Netanyahu confirmed the day before yesterday, "Going on hitting targets."

"I was asleep when the neighbors informed me of the army's warning. It was a violent and terrifying night," said Nazmi al-Dahdouh, the owner of the house, 70.

He added, "What happened was the height of injustice. They displaced me and my family. There is massive destruction and damage in all the neighboring houses."

The Israeli bombing left potholes in the roads in some locations, and caused severe damage to the electrical grid, which led to the plunging of the Strip into darkness.

The electricity company said, the day before yesterday, that its fuel is enough for two or three days as a maximum.

The Israeli warplanes launched, on Sunday night, Monday, dozens of raids on the Gaza Strip, what caused damage, especially in a clinic that is the only one that conducts tests for detection of "Covid-19", the offices of the Qatar Red Crescent, and the buildings of the Ministry of Health in the poor and besieged Gaza Strip for about 15 years. Years old.

After the reopening of the Kerem Abu Salem crossing, yesterday, for a few hours, with the aim of bringing in aid, the Coordination Unit for Israeli Government Activities in the Palestinian Territories (COGAT) confirmed its closure, after mortar shells were fired in its direction and towards the Erez crossing.

On another front, several rockets were fired Monday evening from southern Lebanon towards Israel, which responded by firing artillery at the sources of fire, according to security sources in the two countries.

Yesterday, the general strike spread to the cities of the West Bank, including East Jerusalem, and the Arab center inside Israel, in response to popular and official calls, in solidarity with the Gaza Strip and rejecting the Israeli occupation.

All commercial stores and private sectors, except for medical centers, closed their doors, while working hours in the educational sector at all levels were suspended.

The Palestinian government announced the suspension of work yesterday, so that employees could participate in the rallies, while Fatah movement called in a statement for Palestinians to participate in marches and demonstrations that started from city centers and the "peaceful" confrontation with the Israeli army and settlers yesterday.

All non-essential Palestinian businesses in the West Bank and East Jerusalem cities were closed, with large demonstrations expected in the afternoon, including at the tension point at the Damascus Gate, the entrance to the Old City.

Unprecedented acts of violence are being recorded inside Israel, especially in "mixed" cities, in which Jews and Arabs reside, after an Arab was killed by a settler last week.

Yesterday, the Israeli army said that it had "thwarted" an attack against its soldiers in Hebron, and the Palestinian Ministry of Health confirmed his death, bringing the number of Palestinian martyrs in the West Bank since last week to 21.

At a time when the truce was faltering, the Elysee Palace announced that French President Emmanuel Macron and his Egyptian counterpart Abdel Fattah Al-Sisi were conducting videoconferences with Jordanian King Abdullah II, seeking to mediate the escalation between Israel and the Palestinians "with the goal of achieving a rapid ceasefire and avoiding the expansion of the conflict." .

The United Nations, with the help of Qatar and Egypt, has also launched an initiative aimed at containing the escalation.

The White House National Security Adviser, Jake Sullivan, said that he spoke to his Israeli counterpart and the Egyptian government, the day before yesterday, and that his country is engaged in "quiet and intense" diplomacy.

Yesterday, the Chairman of the US Joint Chiefs of Staff, Mark Milley, warned of the spread of violence.

"My assessment of the matter is that you risk further destabilization and a series of negative repercussions if the fighting continues," he told reporters, before arriving in Brussels for talks with NATO allies.

"It is not in anyone's interest to continue fighting," he added.

• About 47 thousand displaced persons in the Gaza Strip seek refuge in 58 schools run by the United Nations in Gaza.

• A comprehensive strike is pervading the cities of the West Bank, including East Jerusalem, and the Arab center inside Israel.