China News Service, May 19th. On May 15, China's "Tianwen-1" Mars probe successfully landed on Mars and made history. Many foreign media and scientific magazines have made positive comments on this pioneering work. Many experts even want to plan a route for the "Zhurong" rover, showing a keen interest in the exploration of Mars and the development of China's spaceflight. The picture shows the s 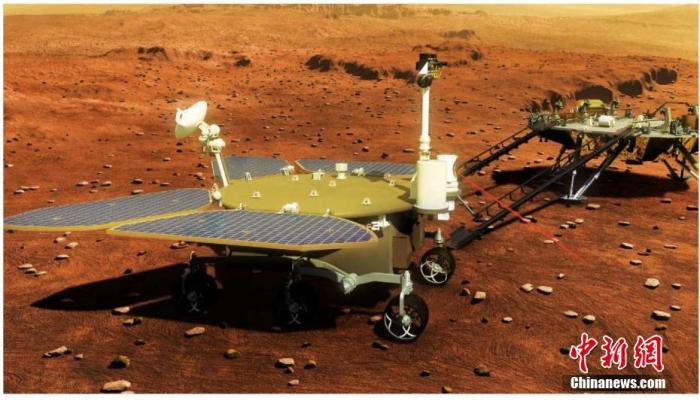 China News Service, May 19th. On May 15, China's "Tianwen-1" Mars probe successfully landed on Mars and made history.

Many foreign media and scientific magazines have made positive comments on this pioneering work. Many experts even want to plan a route for the "Zhurong" rover, showing a keen interest in the exploration of Mars and the development of China's spaceflight.

The picture shows the simulation of the "Zhurong" Mars rover.

"The U.S. has company on Mars"

The US "New York Times", the Australian Broadcasting Corporation (ABC) and other media have published articles, covering China's "fire detection" mission in detail.

"The New York Times" report on May 17 opened with "The United States is now on Mars." From the perspectives of mission content, landing sites, and landing process, China’s "fire detection" was systematically introduced and introduced. Combing.

He also introduced the details of China's Mars mission named "Tianwen" after a classic poem and the rover named after the Chinese god of fire "Zhu Rong".

The New York Times pointed out that China has achieved something that only two countries, the United States and the Soviet Union, have done: successfully landed on Mars.

On May 18th, the British "Nature" published a long article titled "Why the landing site of the Chinese Mars rover makes geologists so excited". The article lists many scientists' opinions on the "Zhu Rong" Mars. The curiosity of the car journey.

Data map: The picture shows the landing site of Zhurong.

Planetary scientist Alfred from the University of Arizona said that he was very interested in a pit cone in the published image, and he has placed it "first" on the survey list.

According to reports, it can be seen in the aerial images that there is a pit cone about 3 kilometers northwest of the "Zhurong". The report pointed out that this may be a volcano formed by lava or mud.

Since the emergence of mud volcanoes on Earth is related to the production of methane by bacteria, planetary scientist McCallsky of the University of Hong Kong believes that their presence on Mars may help explain the large number of volcanoes previously detected in the Martian atmosphere. Confused methane.

McCallsky also said that the shallow cliffs and troughs appearing in the image are reminiscent of the permafrost regions of Canada and Siberia.

This suggests that features on Mars may also be formed by a process driven by ice.

Not only that, but multiple research teams are also trying to plan a route for the "Zhurong" rover.

McCorsky said, "A lot of teams will try to plan the itinerary, where you (the rover) will arrive in what time, and accomplish as many goals as possible in the 90-day mission.

In an article on May 18, the Australian Broadcasting Corporation compared the Mars probes of China and the United States as a whole.

It said that the "Zhurong" used the most widely used reverse thrust hovering landing scheme when landing. Although this scheme has higher requirements on the terrain, the technical safety is also higher.

"China contributes more to the knowledge base of mankind"

"Together with the global scientific community, I look forward to the important contribution this mission will make to humankind's understanding of this red planet," he wrote on social media.

The British Broadcasting Corporation (BBC) quoted experts as saying that the successful landing on Mars has brought great encouragement to China and also proved that "China can contribute more to the knowledge base of mankind."

The article mentioned that "Zhurong" will conduct a series of experiments to study the topography, geology and atmosphere of Mars.

One of the goals is to better understand the distribution of ice in the area, "helping to support future visits by humans."

Agence France-Presse also reported that China has made great progress in the aerospace field since it launched its first satellite in 1970.

"China's successful landing on Mars proves to the world that there is another country with advanced interplanetary space exploration capabilities."

In addition, in response to the recent announcement of China and Russia to jointly build an international lunar research station, the BBC stated that this cooperation is of great significance to both parties, "it can be called the largest international cooperation in the history of China's aerospace."