While supporting the ceasefire and selling arms, the US government says one thing and does one thing? 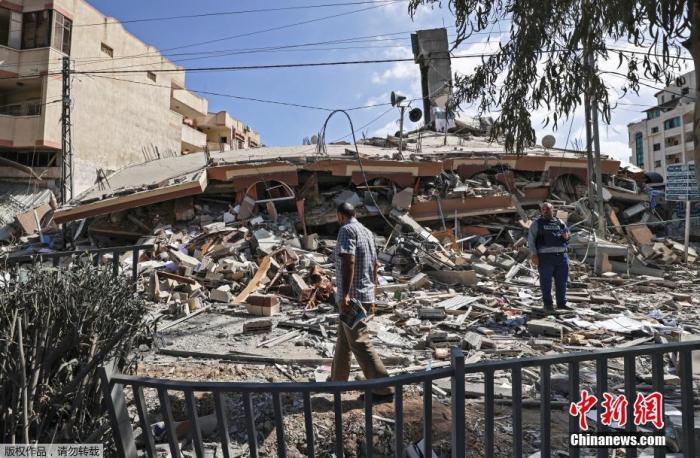 Chinanews, May 19th, a comprehensive report, on the 17th local time, the United States expressed for the first time that it supports a ceasefire between Israel and Palestine.

However, between the rhetoric, the United States did not expressly demand that the two countries stop violence.

At the same time, while talking about supporting a ceasefire, the United States is selling weapons to Israel on the other.

On May 18, 2021, local time, in the Gaza area, the Palestinian-Israeli conflict continued, and the Gaza Strip continued to encounter air strikes. Many houses were affected by the war and the streets were devastated.

The U.S. Says Yes to Support the Ceasefire

Are selling arms to Israel

The White House announced on the 17th local time that US President Biden said in a telephone conversation with Israeli Prime Minister Netanyahu that the United States supports a ceasefire between Israel and Palestine.

This is the first time the United States has expressed support for a ceasefire.

However, the US government has not explicitly requested a ceasefire between the two countries.

A U.S. government official stated that the decision not to explicitly call for a ceasefire was intentional.

Biden is concerned about the increasing bloodshed, but the wording of the statement reflects the determination of the White House to support Israel in resisting Hamas.

It is worth noting that on the one hand, the United States is working hard on "speaking", while on the other side, it has shown its "double standard" in action.

As tensions between Palestine and Israel continue to rise, it is reported that the Biden administration has approved the sale of precision-guided weapons worth US$735 million to Israel, including "joint direct attack munitions" and GBU-39 small-diameter bombs.

A source in the US Congress said on the 17th that although the violent conflict between Palestine and Israel continues, it is expected that members of Congress will not oppose the transaction.

Three congressional aides stated that Congress formally received the notice of this commercial arms sales plan on the 5th as part of the regular review process before the implementation of major foreign arms sales agreements.

They claimed that the leaders of both parties of the Congress’ Foreign Affairs Committee, which was in charge of reviewing such arms sales at the time, had no objection.

When asked to comment on the matter, a spokesperson for the US State Department pointed out that, in accordance with federal laws and regulations, the State Department cannot publicly comment or confirm the details of licensing activities related to direct commercial sales.

US media pointed out that although US law allows Congress to oppose arms sales, Congress is unlikely to do so this time.

According to U.S. law, Congress has a 15-day window to object after the notification of the arms sales is officially received, and the number of days left is not enough to complete the relevant procedures.

On May 15, local time, the Israeli military airstrikes an office building in the Gaza Strip with offices for media such as Qatar Al Jazeera and the Associated Press.

Members of the U.S. expressed opposition

Criticism by name in the international community

U.S. Rep. Omar said that with the escalation of violence and attacks on civilians, the Biden administration’s arms sales to Israel would be “terrible”.

He said that if the government completes the deal, it will cut back any efforts to call for a ceasefire.

Other Democrats also called on the U.S. government to take stronger and effective actions to end the conflict as soon as possible.

On the 18th, Iranian Foreign Minister Zarif criticized the U.S. plan to provide Israel with precision-guided weapons by name, saying it would cause more deaths of children.

He said: "The whole world is watching Israel and its supporters with ugly faces."

Turkish President Erdogan delivered a speech in the capital Ankara on the 17th, criticizing the Biden administration for signing an arms sales agreement with Israel.

He said that Turkey will provide support for the international community's efforts to protect the Palestinian people.

In addition, on the 17th, the United States once again prevented the UN Security Council from passing a joint statement calling for an end to the riots between Palestine and Israel and the protection of civilians.

This is the third time in a week that the United States has prevented this declaration from passing.

Of the 15 participating countries in the Security Council, 14 countries agreed to adopt the statement.

A number of diplomats revealed that the United States expressed that it hopes to have more time for "its own diplomatic efforts."