"Only a small part is missing": how Berlin assesses the situation with the implementation of Nord Stream 2

The completion of Nord Stream 2 depends only on the builders, since the project has all the permits. This was stated by the head of the Ministry of Economy and Energy of the Federal Republic of Germany Peter Altmeier. Earlier, the German environmental organization Deutsche Umwelthilfe announced that it intends to stop the implementation of Nord Stream 2 due to its allegedly unfriendly nature. Meanwhile, the media reported that the administration of US President Joe Biden will waive sanctions against Nord Stream 2 AG. However, the State Department stressed that Washington opposes the implementation of the project. 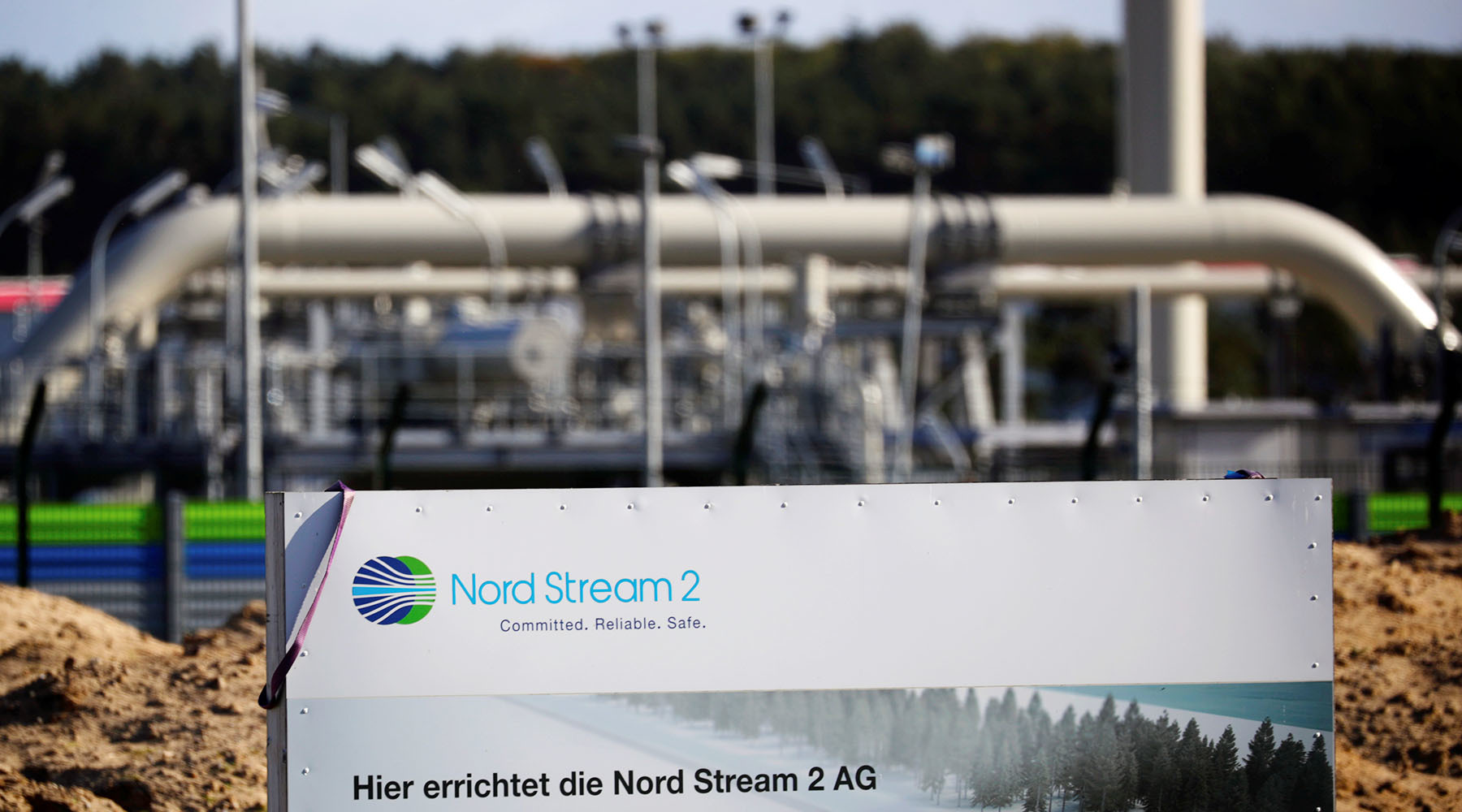 The completion of Nord Stream 2 depends only on the builders, since the project has all the permissions of German and European regulators.

This was stated by the head of the Ministry of Economy and Energy of Germany Peter Altmeier at the conference "Potsdam Meetings".

“I have always supported German-Russian cooperation, but I am not an engineer, and the problem that is present now is not missing permits, permits were issued in Germany, in the Scandinavian countries, where the pipeline was laid.

Only a small part is missing, "the minister said, adding that the completion of the construction" depends on how quickly the pipeline will be laid. "

Altmaier also noted that the issue of full implementation of the project could be resolved within the next 12 months.

Earlier in Germany, the environmental organization Deutsche Umwelthilfe (DUH) announced that it intends to stop the implementation of Nord Stream 2.

She plans to challenge in court the decision of the Federal Office for Shipping and Hydrography of the Federal Republic of Germany (BSH) on the immediate continuation of the construction of the gas pipeline in the German exclusive economic zone.

This is stated in a press release from DUH.

According to the head of the environmental organization Sasha Müller-Krenner, BSH has allowed the project to continue to be implemented “in spite of any reasonable climate policy”.

“It is absolutely clear that the construction and operation of Nord Stream 2 is not compatible with climate goals,” the press service of Deutsche Umwelthilfe quoted her as saying.

Müller-Krenner also said the organization will use "all available legal means to stop further construction" of the pipeline.

“We will now turn to the Hamburg Administrative Court to restore the deferral in accordance with our claim,” she said.

On the eve of the German Federal Office for Shipping and Hydrography "ordered to immediately bring into force the second permit for the construction and operation of the Nord Stream 2 pipeline for laying a two-kilometer section in the exclusive economic zone of Germany."

This was reported in a press release from the structure.

"Aspects of nature protection do not contradict this decree, since due to the end of the winter rest period in May and the marginal position of this short segment, no significant damage to protected bird species and the tasks of the Pomorskaya Bukhta reserve is expected," the message says with reference to words of BSH President Dr. Karin Kamman-Klippstein.

Let us remind you that the German organization Deutsche Umwelthilfe has previously challenged the permits issued by Germany for the construction of Nord Stream 2.

For example, last year, DUH filed a lawsuit with the Supreme Administrative Court of Greifswald against the Stralsund Mining Authority to review the pipeline's operating permit.

According to DUH, this Mecklenburg-Vorpommern state regulator, during the issuance of the advisory document in the winter of 2018, did not correctly assess the environmental risks.

In April this year, environmentalists from Deutsche Umwelthilfe also filed a lawsuit with the Hamburg Administrative Court against a permit previously issued by the Federal Office for Shipping and Hydrography to build Nord Stream 2 during a sensitive nesting season. According to DUH, the BSH document on the further implementation of the project from January 2021 is illegal, since allegedly there is “no need for Nord Stream 2,” and the consequences for “climate protection policy goals” are ignored. It also clarifies that allegedly denied "the impact on seabirds and porpoises."

It should be noted that the operator of Nord Stream 2, Nord Stream 2 AG, published a report on the results of environmental monitoring of the pipeline construction in 2019 in March this year.

It states that the work carried out "did not have an unforeseen impact" on the environment.

It is noted that during the monitoring studies, air quality, the state of birds and marine mammals, as well as other environmental parameters were analyzed.

) purpose was to assess the actual impact of construction work on the offshore (in the waters of Russia, Finland, Sweden and Germany) and onshore sections of the gas pipeline (in Russia and Germany)", - specified in Nord Stream 2 AG.

In particular, it is reported that in the waters of the Federal Republic of Germany, the impact of such actions on the environment in 2018 "was in line with the initial assessment, which was confirmed by monitoring carried out after the completion of construction in 2019."

“Using dredgers exclusively for dredging within the Natura 2000 protected area has proven to be an effective measure in minimizing their impact area.

Contamination of bottom sediments was not recorded, ”the company stressed.

Earlier, Nord Stream 2 AG stated that the construction of Nord Stream 2 was approved by the competent authorities of five states on the basis of a comprehensive environmental impact assessment.

It was also reported that the project is being implemented in strict compliance with the current international and European legislation.

As it became known to the Axios portal, the administration of US President Joe Biden, which has consistently opposed Nord Stream 2 ", will abandon sanctions against Nord Stream 2 AG and its executive director Matthias Warnig.

At the same time, US Secretary of State Anthony Blinken, during a conversation with German Foreign Minister Heiko Maas, stressed that the US opposes the project.

This was reported in the State Department.

As Vladimir Olenchenko, senior researcher at the Center for European Studies at the IMEMO RAS, noted in an interview with RT, attempts to hinder the implementation of the Nord Stream-2 project using environmental tools have been carried out for several years.

“In particular, on the part of one of the initiators of this process - the organization Deutsche Umwelthilfe - calls are heard poorly reasoned for the German economy.

In the opinion of the ecologists of this structure, Germany needs to abandon Russian gas, as well as stop the construction of the Nord Stream 2 gas pipeline.

However, environmentalists do not mention that if the project is abandoned, the German authorities will have to resort to buying American LNG, the carbon footprint from liquefaction and delivery of which is several times higher than from pipeline gas, ”the expert said.

According to Nikita Danyuk, a member of the Public Chamber, First Deputy Director of the Institute for Strategic Studies and Forecasts of the RUDN University, Germany is extremely interested in the implementation of Nord Stream 2.

"Berlin's position on the project has not changed under the onslaught of criticism from the Union 90 / Greens and environmental organizations such as Deutsche Umwelthilfe, since the pipeline will provide Europe with the gas it needs at favorable prices," the expert said in a conversation with RT.

He also stressed that "the environmental agenda in Germany is absolutely biased."

“Environmental issues, unfortunately, are becoming political tools, and environmental organizations are ready to play these games.

In fact, energy cooperation between Russia and the FRG is controlled by a large number of all kinds of supervisory bodies.

During this cooperation, ardent environmentalists have not identified a single case that could call into question the environmental friendliness of the Nord Stream 2 project, - said Danyuk.

Olenchenko, in turn, noted that the activities of the Deutsche Umwelthilfe organization may be associated with the Soyuz 90 / Greens pariah, which also requires the curtailment of the implementation of Nord Stream 2 due to the allegedly significant impact on the environment.

“Now this political force is in the status of opposition in Germany.

Serious altercations are taking place between Soyuz 90 / Greens and other politicians, including over the construction of the gas pipeline.

Before the elections to the Bundestag, this struggle will only intensify and will be accompanied by new initiatives from environmentalists demanding to stop the project, ”the analyst said.

Olenchenko also drew attention to the fact that the German authorities "are aware that biased attempts to ascribe environmental failure to the Nord Stream 2 project are groundless."

“Therefore, there will be no significant consequences from such activities of German ecologists and Soyuz 90 / Greens. The situation will remain at the same level, the activists simply will not have time to achieve any new restrictions for the project, which is almost completed, ”the expert concluded.