Unanimous agreement in the meeting of the control room on the management of the new phase of the pandemic, during the Council of Ministers the ok will be given to the new decree 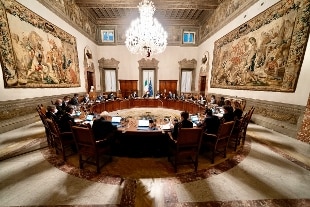 May 17, 2021 The road map that emerged in the control room chaired by Prime Minister Mario Draghi was unanimously approved. The Council of Ministers that should launch the new anti-Covid measures will be held at 18.30.

at 11pm "immediately", then it will be postponed to midnight on June 7 and then be abolished completely on June 21.

also indoors in the evening from 1 June. This is the proposal agreed during the reopening control room and which will be examined by the Council of Ministers tonight. In any case, from 1 June in bars and restaurants, table consumption will also be allowed indoors from 5 to 6 pm.

presence of the public

, according to sources of Palazzo Chigi at the end of the control room, is authorized for all sports events and competitions from 1 June outdoors and from 1 July indoors within the limits already set (capacity not exceeding 25% of the maximum and in any case not exceeding 1000 people outdoors and 500 indoors), and no longer limited to competitions of national interest.

From 1 June Friuli Venezia Giulia, Molise and Sardinia will be

. From 7 June also Abruzzo, Veneto and Liguria. In the regions in the white zone, only the rules of behavior (mask, spacings) apply. There is no curfew.

resume activities from July 1st, while gyms will be able to reopen as early as May 24th.

will return to operation from 22 May, the

reopen on 15 June, the recreational and social centers from 1 July.

, while the possibility of extending the

to nine months is being considered.

From today Italy almost all yellow

It will be an Italy almost completely in yellow that represented in the Covid map starting from today. In fact, the Minister of Health Roberto Speranza, on the basis of the data and indications of the Control Room of last May 14, 2021, signed a new ordinance that brings the Regions of Sicily and Sardinia to the yellow zone. The only "chromatic variation" will be represented by the Aosta Valley, which even having yellow numbers must remain in the orange zone according to the order signed on Friday 7 May by the minister.

This is a result that comes after 5 months and that will lead to important reopening even in the only regions that have remained with stricter restrictive measures so far. In these areas, green light for restaurants (those with open spaces), cinemas, theaters and museums and travel.

Meanwhile, foreign tourists begin to appear again in the squares and streets of Italian cities, after the circular of the Minister of Health, Roberto Speranza, who from today cancels the quarantine for citizens of the European Union and Great Britain, but also for those who comes from the territories of the Schengen area and Israel. Meanwhile, since Saturday, the Italians have returned to the beach on the day of the reopening of the establishments and outdoor pools.

A restart that confirms that principle of gradualness and prudence in the executive's choices that the Prime Minister Mario Draghi has repeated several times and which he will repeat at the summit with the majority group leaders of tomorrow, despite the constant pressure of the center-right and most of the regional presidents.