Suicide Milan, only 0-0 at Meazza with Cagliari already saved

Pioli's Rossoneri now, to enter the Europe that matters, will have to go and win on the last day at Atalanta or hope for a positive result for Bologna at Dall'Ara against Juve 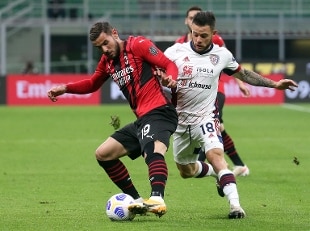 May 16, 2021Only Cagliari are celebrating at San Siro.

AC Milan needed a victory for the Champions League but a 0-0 has arrived which certifies the salvation of the Sardinians (obtained even before entering the field thanks to the equal of Benevento) and the missed opportunity of the Rossoneri who will now have to go to win in Bergamo with Atalanta or hope for the positive result of Bologna at home against Juve.

Pioli confirms for 10/11 the formation of the bombastic 7-0 at Turin, with Rebic as the first striker. Saelemaekers returns and completes the department with Diaz and Calhanoglu. Simple with Nainggolan and Joao Pedro behind Pavoletti. Rossoneri with 4-2-3-1: Donnarumma G .; Calabria, Kjaer, Tomori, Theo Hernández; Bennacer, Kessié; Saelemaekers, Brahim Díaz, Calhanoglu; Rebic. Sardinians with 3-4-2-1: Cragno; Ceppitelli, Godin, Carboni; Nandez, Marin, Deiola, Lykogiannis; Nainggolan, João Pedro; Pavoletti. The first flash of a very balanced first half is from Saelemaekers who receives the ball from Calhanoglu and tries from distance, Cragno deflects for a corner (18 '). Sardinian response with Joao Pedro who fails to get on a dirty shot by Nainggolan (27 '), while at 39' Theo Hernandez manages to anticipate Pavoletti by a whisker on the development of a corner.

In the second half, Pioli immediately removes Saelemaekers to insert Leao (46 '). Milan try to increase the laps and push, but risk a lot in the 54th minute on a cross from Joao Pedro that Pavoletti, from an excellent position, crushes with his head but 'hits' Donnarumma who rejects as he can. Another substitution among the Rossoneri with Castillejo in place of Brahim Diaz (57 '). He tries on Godin corner of the head, very high (62 '). Double change in the 63rd minute in Milan: inside Dalot and Meite for Calabria and Bennacer. At 64 ', again on the corner, Donnarumma's great save on a header from Godin. Immediately afterwards the Devil is seen forward again, but Castillejo's aerial split ends high (66 '). At 68 'Leao's cross from the left, the' usual 'Castillejo doesn't get there for a while. Double substitution also in Cagliari at 78 ': in Cerri and Duncan for Pavoletti and Marin.Forcing of Milan in search of the success that is worth the Champions. Latest changes: Asamoh, Klavan and Rugani enter Cagliari (between 86th and 88th minutes), among the Rossoneri Mandzukic for Calhanoglu (89 '). Final siege of Milan dragged by one of the most inspired Castillejo, but Cagliari holds well, ends 0-0.