The diplomacy of Europe also moves to find a solution that stops the conflict between Israel and Hamas. Borrell, calls an "extraordinary summit" of EU foreign ministers for Tuesday 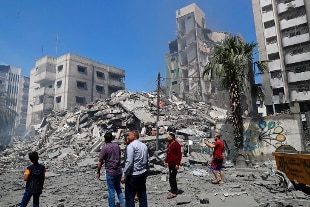 The meeting of the United Nations Security Council is expected in the Middle East, scheduled for this afternoon.

. Israel's latest attacks on the Gaza Strip in response to the launch of dozens of rockets by Hamas on Sderot and Tel Aviv are heavy.

"What we want to see is a strong united voice calling for an end to hostilities and putting the parties at a table to find a solution to this conflict that has been going on for too long." This is the message from the UN secretary Antonio Guterres who, through his spokesman Stephane Dujarric, spoke on the conflict.

The hypothesis of a truce for refueling in Gaza

The United Nations, Egypt and Qatar are allegedly negotiating a brief truce between Israelis and Palestinians to allow Gaza to refuel itself with the necessary fuel not to run out of electricity

from tomorrow at the latest. This was reported by two Western diplomats quoted by the Financial Times. According to the British newspaper, which quotes a government adviser, Israel is considering Hamas' offer of a "long-term" truce.

The army wants the Islamist organization to deliver the bodies of two killed soldiers; on the plate, according to the source, there is also the fate of two Israeli civilians detained in Gaza.

A ceasefire with Hamas was not discussed at the meeting of the Israeli government's security cabinet. The Israeli media reported this, citing an anonymous diplomatic source. The news has not been confirmed by official sources.

Israeli Defense Minister Benny Gantz met Hady Amr, Deputy Assistant Secretary for Israeli and Palestinian Affairs of the Biden administration this morning. According to the liberal Israeli daily Haaretz, "diplomatic officials stationed in Jerusalem have said that support for the military operation in Gaza is almost exhausted" and "this Sunday can be decisive on the diplomatic front".

Any mediation is complicated by the fact that the United States and most Western powers do not speak to Hamas, which is considered a terrorist organization. And Abbas, whose power base is in the occupied West Bank, exerts little influence over Hamas in Gaza. The United Nations and Egypt are also working to restore calm, but have not yet shown signs of progress. The United Nations Security Council is expected to meet today. Both Israel and Hamas insisted they would continue their cross-border fire.

In light of the ongoing escalation between Israel and Palestine and the unacceptable number of civilian deaths, I will convene an extraordinary council of EU foreign ministers via videoconference on Tuesday. "This was announced by EU High Representative Josep Borrell on Twitter. "We will coordinate and discuss how the EU can best contribute to ending the current violence", added Borrell.

Rocket launches on Israel and intense raids on Gaza

These are "the most intense air strikes in the last seven days", so to the Jazeera described the Israeli attacks last night on the Gaza Strip. The Israeli jets - writes on the broadcaster's website the correspondent Safwat al-Kahlout - carried out 150 air attacks in the early hours of today,of which at least 60 in Gaza City alone.

After a lull lasting a couple of hours, around midnight, Hamas fired a heavy barrage of rockets from Gaza into central and southern Israel. According to the Israeli army, in the same minute a Palestinian vehicle broke through a military checkpoint and attempted to overwhelm Israeli soldiers southwest of Hebron. An Israeli soldier responded to the attack by shooting at the vehicle.

At least 40 Palestinians, including eight children, were killed today in Israeli attacks on the Gaza Strip, the highest daily number since the escalation began. In total, 188 Palestinians have been killed since Monday.

During the night, 130 rockets were launched from Gaza on Israel, including those on Tel Aviv and in the center of the country. Meanwhile, the meeting of the government's security cabinet has just begun, addressing the situation with the Strip and the next steps to be taken. According to some media, reports the Times of Israel, some ministers call for the operations to be concluded soon.

Since the beginning of the conflict 2,900 rockets have been launched towards Israel from Gaza, but 450 of them have proved defective and have fallen inside the Strip. This was announced by the Israeli military spokesman. The Iron Dome batteries intercepted 1,150 rockets. Still others fell in open areas. In the past 24 hours, according to the spokesman, Israel has hit 90 Hamas and Islamic Jihad targets in Gaza.

Israel bombed the home of Hamas leader in Gaza, Yehya Al-Sinwar, and the Islamist group fired rocket volleys in Tel Aviv as hostilities continue into the seventh day with no sign of abating. Local sources and residents denounce on twitter dozens of consecutive attacks on the main streets of Gaza City, which also hinder ambulance rescue.

The Israeli bombing of Gaza City touched the building that houses the UN agency for Palestinian refugees (Unrwa). The director of the institution Matthias Schmale reports in a tweet, "God help the people of #gaza - writes in a post.

The destruction of the building that housed Ap and Al Jazeera

Yesterday Israel destroyed a 12-story building in Gaza City that housed the Associated Press and Al Jazeera. The Israeli military said the al-Jala building was a legitimate military target, containing Hamas military offices, and that it had warned civilians to leave the building before the attack. The PA condemned the attack and asked Israel to provide evidence: "We had no indication that Hamas was in the building or that it was active in the building," the news outlet said. In what has been called retaliation for Israel's destruction of the Theal-Jala building, Hamas fired rockets at Tel Aviv and cities in southern Israel.

Di Maio, the EU takes a unified position on the Middle East

"The violence and all attacks between Israel and Palestine must stop. Rocket launches must be stopped, they are unacceptable. Too many innocent people are losing their lives, victims of a conflict that must be stopped immediately". Foreign Minister Luigi Di Maio wrote it on Facebook, recalling that "on Tuesday, also at the request of Italy, an extraordinary Council of Foreign Affairs of the European Union was convened". "The EU - underlined Di Maio - must take a clear and unified position and work to push the parties to sit down at the negotiating table. We act quickly and in synergy".

Saudi Arabia has called for today a meeting of the foreign ministers of the Organization of Islamic Cooperation (OIC), "to discuss Israeli aggression against the Palestinians". Al-Arabiya reports this, relaunching a statement from the OIC itself. Riyadh, headquarters of the OIC, will host the meeting via videoconference. The Organization of Islamic Cooperation is the vast body that brings together 57 Muslim-majority nations, including Iran, Turkey and Indonesia. Meanwhile, an extraordinary meeting of the UN Security Council is scheduled for today, again on the escalation of hostility between Israel and the Palestinians.

Pope Francis: appeal for peace in the Holy Land: "To stop the clamor of weapons"