Across the "Nine Minutes of Black", take stock of the three major difficulties of Tianwen No.1's "falling fire"

China News Service, Beijing, May 16 (Guo Chaokai, Zhu Chenxi) On May 15, Tianwen-1 successfully landed in the pre-selected landing zone in the southern part of the Mars Utopia Plain. China's first Mars exploration mission to Mars was a complete success. The Tianwen-1 mission achieved China's first extraterrestrial planet landing, which is another significant milestone in the development of China 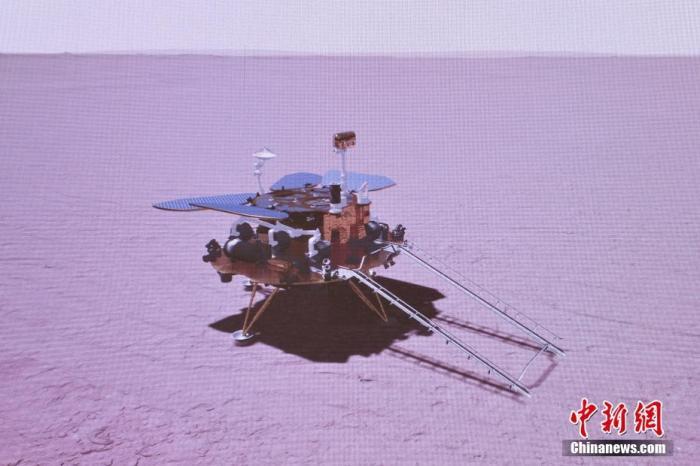 China News Service, Beijing, May 16 (Guo Chaokai, Zhu Chenxi) On May 15, Tianwen-1 successfully landed in the pre-selected landing zone in the southern part of the Mars Utopia Plain. China's first Mars exploration mission to Mars was a complete success.

The Tianwen-1 mission achieved China's first extraterrestrial planet landing, which is another significant milestone in the development of China's aerospace industry.

Landing from the outer edge of the Martian atmosphere to the surface of Mars through a soft landing, Tianwen-1’s “falling fire” not only faced three major difficulties, but also had to cross the “nine minutes of black”, which was “horrifying every step”.

Mars is currently the key target of planetary exploration.

But of the 47 Mars missions that humans have implemented, only 25 have been successful or partially successful.

The picture shows the simulation of the Mars probe Tianwen-1 landing on the surface of Mars.

What are the problems with "falling fire"?

There is a thin atmosphere on the surface of Mars, which is completely different from the environment of the moon and the earth.

Geng Yan said: “The moon has no atmosphere, and the landing process is completely decelerated by reverse thrust engines, and there are few interference factors. However, our understanding of the Martian environment is very limited, and there is no data after flight verification. The effects of Martian storms are very unstable; the surface of Mars is complicated with rocks, slopes, ravines and other obstacles; Martian dust storms are also more serious than the earth. These will bring great risks."

Difficulty two, the landing process is more complicated, and multiple actions must be completed within 9 minutes.

Sun Zezhou, chief designer of the Tianwen-1 probe of the Fifth Academy of China Aerospace Science and Technology Corporation, pointed out that the entire landing process of Tianwen-1 requires a combination of aerodynamic shape, parachute, engine, landing buffer and other technologies to implement soft landing.

Every link must be accurate and error-free. One second may cause the entire mission to fail.

Difficulty three, the distance is far away, and the whole process can only be controlled autonomously by Tianwen-1.

Geng Yan said that when the Tianwen-1 landed, the distance between Mars and the earth was 320 million kilometers, and the radio signal went back and forth for about 35 minutes. It was impossible to directly remotely control the ground. The measurement and judgment of all actions triggering conditions, all actions The execution, including the final stage by taking images of the landing area and selecting the landing sites that meet the conditions, is autonomous measurement, autonomous judgment, and autonomous control.

Across the "Black Nine Minutes"

The Tianwen No. 1 Landing Patrol needs to complete more than 10 actions within 9 minutes. Each action must be completed in one go, and there is only one chance. It can be described as interlocking and startling.

The stage of "entering, descending, and landing" is the most critical and core part of Mars exploration.

Most of the previous Mars exploration missions that have been carried out abroad have declared failures because of the "broken halberds" in the process.

Sun Zezhou said that the Tianwen-1 probe inherited the mature hovering and obstacle avoidance technologies of Chang'e No. 3, No. 4, and No. 5 to ensure a safe landing.

In addition, scientific researchers have adopted the ballistic-lift entry scheme based on trim wing for the first time in the world to reduce the risk caused by the uncertainty of Martian atmospheric parameters and improve adaptability.

For example, today Question 1 has successfully soft-landed on the Martian Utopia Plain.

After a successful landing, the entry module and the "Zhu Rong" rover will complete the ramp and the solar wing antenna deployment. The rover will send the news of the successful deployment back to the ground as soon as possible.

After everything is ready, the rover will autonomously leave the landing platform, arrive at Mars, and start a new journey.

These scientific payloads have five major missions, which mainly involve research on the Martian space environment, surface morphology and soil surface structure, etc., which will bring first-hand information on Mars.

In the follow-up, the "Zhurong" Mars rover uses a three-day work cycle.

Affected by the harsh environment of Mars, the rover can only "work" for one or two hours at a time. The work content mainly includes environmental perception, scientific exploration, and data downloading.

More unknown secrets about Mars are waiting for "Zhurong" to explore and reveal the secrets.