Total war between Israel and Hamas

The escalation between the Israeli Army and the Palestinian militias has jumped several notches with the shelling, after being evacuated, of a 12-storey building in Gaza, which ... 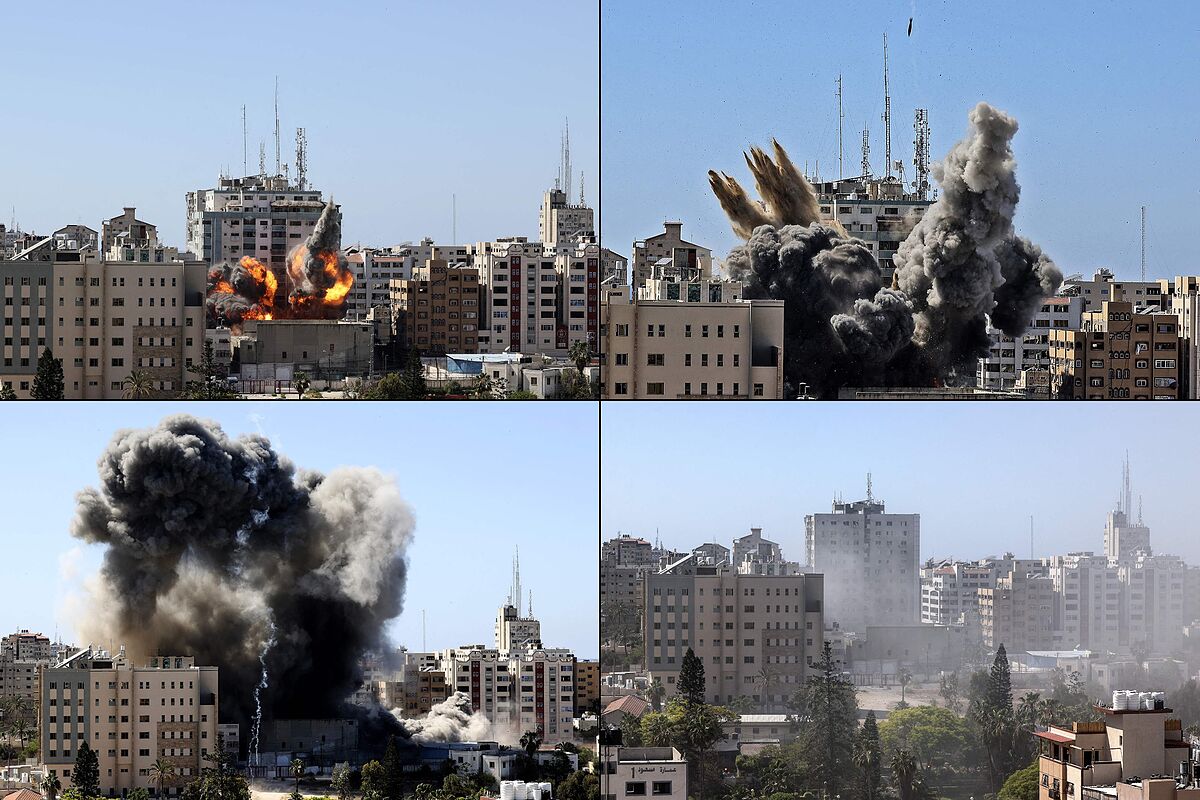 The escalation between the Israeli Army and the Palestinian militias has jumped several notches with the shelling, after being evacuated, of a 12-storey building in Gaza, which housed the offices of some international media, or new rounds of projectiles against Tel Aviv and surroundings. In the past, the intensification of the spiral of violence served paradoxically at times as the prelude to a truce.

The question is whether this escalation will also be more virulent than the others.

After six days of massive Israeli air offensive, the death toll given this Saturday by the Ministry of Health of the impoverished enclave controlled by the Islamist group Hamas reached

In Israel, the number reached

In the morning, all eyes were on the Gaza Strip Shati refugee camp in the wake of the attack that killed 8 children and two women from

The shelling hit the three-story building they were in.

"The house was attacked without Israel warning us before,"

said Abu Hatab who asked the head of the Hamas armed wing to take revenge: "We are all soldiers of Mohamed Deif, finish them off."

"I saw the bodies of four people, including children, who were rushed to the hospital.

I could not hold it and ran back to my house,

The health team revealed that a baby survived.

, "it is a massacre. This crime reflects the inability of the occupation in the face of resistance in Gaza, the West Bank and Jerusalem."

"everything possible to prevent harm to civilians."

"Since the beginning of the escalation that Hamas started attacking Jerusalem, we have evidence that

and dozens of Jihad

, while at least 20 civilians in Gaza were killed by Hamas projectiles that fell short and landed on their territory. "says military spokesman

Dozens of projectiles against Tel Aviv

Hamas' response to Shati's attack resulted in dozens of projectiles against Tel Aviv and its surroundings, even reaching the Arab Israeli town of Taibeh, further north, where more than a few residents celebrated by handing out candy.

The impact of a projectile in a house caused the death of an Israeli in Ramat Gan (adjacent to Tel Aviv), who returned to the nightmare of 1991 when Iraqi President

to try to provoke the reaction of Israel and thus break the American-Arab alliance in the Gulf War.

"Enough is enough! We must end the Hamas terrorists,"

The Israeli retaliation was resounding and immediate: the destruction of a 12-story building in Gaza that, among other clients, housed the

and the US news agency AP.

The Army called the owner of the building to evacuate it.

"You are in danger. I ask you to get out of there,"

said an Israeli official on the phone in Arabic to the owner who, in turn, asked him for another 10 minutes to vacate the emblematic tower.

Finally, after being evacuated, Al Jalaa collapsed by "three powerful missiles" as reported by AP, whose president

was "shocked and horrified."

Al Jazeera announced that it will take legal action.

According to the Army, the building was also used as a "general command of the joint intelligence of Hamas" and Jihad and served as a "human shield" for its troops.

It is the third building of more than ten floors destroyed by Israel.

The armed wing of Hamas promised "a devastating response" warning that it would "shake Tel Aviv."

According to their spokesman,

have the capacity to launch projectiles at Tel Aviv for a further six months.

The UN, which called for an immediate ceasefire, reported

10,000 displaced people who had to flee their homes

fleeing the bombs in the coastal enclave. Precisely on the day of

(Catastrophe) in which the Palestinians remembered this Saturday the 700,000 who were expelled or fled their homes in the war of 48 after the independence of Israel, UNRWA (UN Agency for Palestine Refugees ) opened their schools to those who saw their houses destroyed or damaged.

Although on such a virulent day talking about a truce seems surreal,

mediation continues to work behind

to at least achieve a temporary ceasefire. The US special envoy,

, who arrived in Tel Aviv this Friday, joined the Egyptian mediation to achieve a truce.

today justified to US President

the bombing of the AP offices. "Netanyahu stressed that Israel is doing everything possible to avoid any harm to those who are not involved" in the conflict, the Israeli prime minister's office said in a statement. "The proof is that the buildings that have terrorist premises are evacuated from uninvolved people before being attacked." Palestinian President

received his first phone call from Joe Biden since arriving in the White House on Saturday, his services in Ramallah, in the occupied West Bank, said.

For its part, Hamas would be interested in a truce against the punishment of both its armed wing (troops, infrastructure and arsenal) and Gaza itself (buildings, electricity, etc.) after an offensive that its leadership did not expect to be so massive. In addition, he

, did not stop firing projectiles and took over the leadership of the cause for Jerusalem.

Israel? The official version is that "the offensive will continue until calm is restored and our cities are no longer attacked," but unofficially they

begin to assess a truce in the next few days

. At the military level, the damage inflicted on Hamas in just six days is believed to be greater than the 50 days in the 2014 war. There are voices, however, calling for the continuation of the offensive to completely end Hamas' capabilities.

The fear of new fronts (huge wave of internal violence between Arabs and Jews, the West Bank and Lebanon with the Lebanese Shiite group Hezbollah) is key in decision-making after one of the most violent weeks in recent years.

It is very possible that the destruction of the tower that served as the headquarters of some international media will increase the pressure on Israel to start the path towards a ceasefire.

Middle East "Hamas will attack us at 18:00, although yesterday they went ahead"

The Iron Dome: the great shield of Israel, under review