Al-Jazeera Media Network condemned the destruction of its office in Gaza, held the Israeli government responsible for the attack, and pledged to take legal action against it. There were also other reactions condemning the destruction of Al-Jazeera's offices and other media outlets. 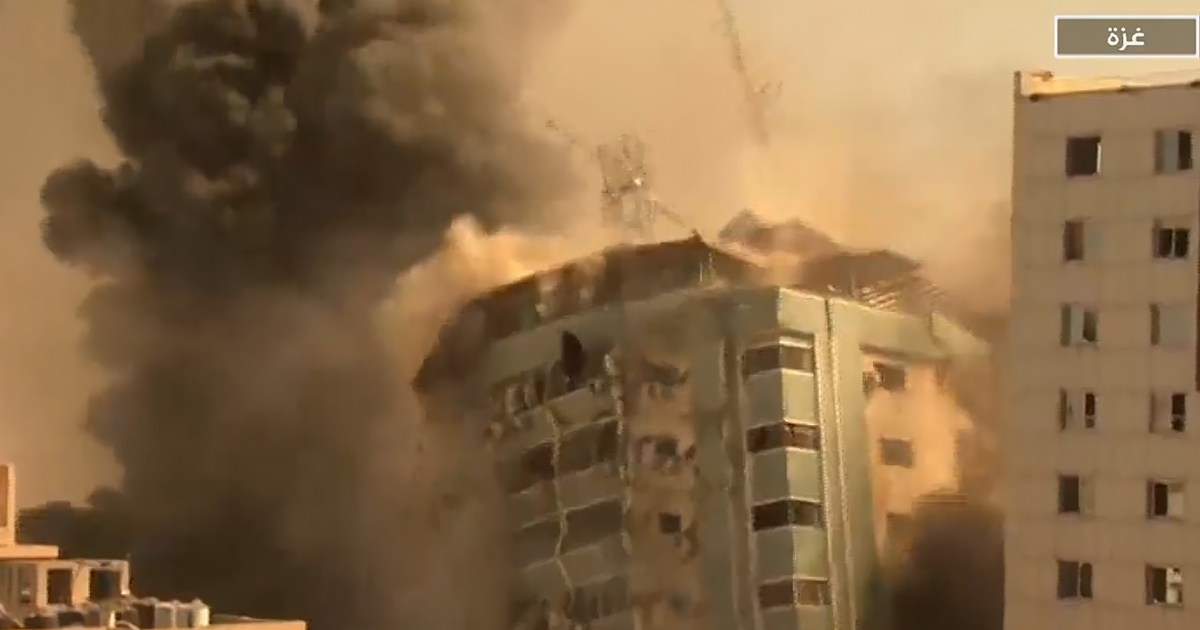 Al-Jazeera Media Network condemned the destruction of its office in Gaza, and held the Israeli government fully responsible for this attack, and pledged to take legal measures against it, and other reactions were issued condemning the destruction of Al-Jazeera offices and other media outlets in Burj Al-Galaa in Gaza City.

The network said in a statement that the destruction of its office is a precedent, contrary to all norms of international law and human civilization.

She described what Israel had done as a barbaric act targeting the safety of its journalists and preventing them from revealing the truth, appealing to the international community to protect journalists.

She added that what was done was an attempt to silence the free media to hide the truth about what the Palestinians are exposed to, and she promised viewers to continue covering and uncovering the facts of what is happening in Gaza, the Palestinian territories and Israel.

The Al-Jazeera network indicated that the Israeli army did not give the residents of Al-Galaa Tower a very short time to evacuate the place before bombing it.

In addition to the Al-Jazeera office, the evacuation tower in Gaza, which was destroyed by Israeli aircraft, includes the office of the American Associated Press and other media offices.

Shock, panic, and accusations of silencing the media

The CEO of the Associated Press, Gary Pruitt, said he was shocked and alarmed by an Israeli attack on a building in Gaza.

In the context, the Executive Director of the Committee to Protect Journalists said that the recent attack raises suspicion that Israel is intentionally disrupting the work of media facilities.

For his part, Jim Boumelha, former president of the International Federation of Journalists who represents 600,000 journalists around the world, described what Israel has done today in Gaza, with deliberate and shameful targeting, and added in an interview with Al Jazeera that what has been a violation of international law and aims to silence the media.

The head of the Ethical Journalism Network, Eden White, told Al Jazeera that what happened was shocking and illegal.

He added that the Israeli government should bear responsibility for violating international law by targeting the media.

In turn, the Iraqi Observatory for Press Freedoms condemned the destruction of press offices in Gaza, accusing Israel of seeking, from behind that, to cover up its heinous crimes and massacres against the Palestinians there.

For its part, the White House said today that it has informed the Israelis directly that ensuring the safety of journalists and independent media is a top responsibility.

For its part, the Turkish presidency said that Israel had dealt a blow to press freedom by targeting the office of Al-Jazeera and the Associated Press.

The head of the presidential communications department, Fakhruddin Altun, wrote in a tweet on Twitter that Israel continues to commit massacres and war crimes.

Regarding the destruction of international media offices in Gaza, he added, "I condemn this humble attack by Israel, which bombed the press centers in order to conceal its massacres."