On the other hand, there is a lot of criticism from the fans about the Lions World Cup selections - two names in particular stand out: “Looks as bad as ...”

Not many have yet had time to label the Lions World Cup team the worst of all time. The men's hockey national team, the Lions, arouses enormous passions in Finns. It came to be proven again when the Lions announced their World Cup team this year. Social media and comment columns, as usual, had enough opinions from side to side. Criticism came, among other things, that the commentator's own favorite team did not accommodate any players. The absence of the finalists of the Finnish 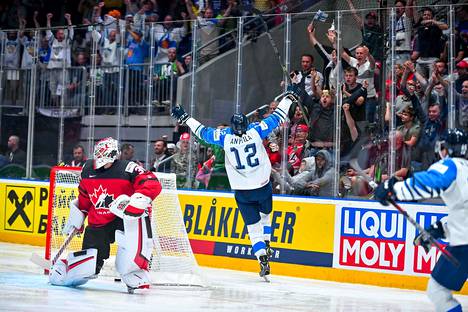 It came to be proven again when the Lions announced their World Cup team this year.

Social media and comment columns, as usual, had enough opinions from side to side.

Criticism came, among other things, that the commentator's own favorite team did not accommodate any players.

The absence of the finalists of the Finnish Champions League, Luko and TPS, was also amazed.

Immediately after the league finals, the Lions team management announced that Luko and TPS players would not have time to give screens in the World Cup camp.

When NHL players Olli Määttä and Arttu Ruotsalainen were selected for the team from outside the World Cup, many commentators followed the logic.

There were a lot of questions and criticisms about the selection of the captain of the World Cup gold team Marko Anttila two years ago, when Eemeli Suomi, who played Ilves as captain for two consecutive high seasons, was left out of the competition team.

According to many critics, Marko Anttila's competition screens from two years ago should no longer have been a valid selection criterion. Photo: Pawel Andrachiewicz / Zuma / Mvphotos

We collected comments related to the Lions competition team from Twitter and from the opinions of Ilta-Sanomat readers.

- When was the last time the World Cup team without Tappara's players?

- No Turku-based players in the tournament = no championship.

- What about the “experts” laughing at Jokers and long summer holidays now?

At least three summer holidaymakers were eligible for the Lions!

- League finalists were not admitted to the World Cup team because they did not have time to give screens.

Arttu Ruotsalainen and Olli Määttä were selected to the team without such a display obligation.

- Well from block to block and then out, not that team for medals to fight.

Mikael Hoikkala, editor of Etelä-Suomen Sanomat, brought up an interesting detail about Pelicans players on Twitter:

It has been quite rare to go straight from the Pelicans to the World Championship Lions, and then gold has been sought at a rather high percentage (Hovinen 2011, Kaski & Olkinuora 2019).

- In a word, the team is competitive.

I don’t blame the choices, I even find it an interesting group.

- Lions is again a candidate for world champion, even though the team lacks top skills.

- I would order a story about how Olkinuora or Säteri grow the whole people Juho or Harri in the Games.

We will not fall into the goalkeeper game again.

Jussi Olkinuora, who defeated Russia on Thursday, may be the Lions' number one guard at the World Championships.

Eemeli's stay on the Finnish coast was translated into many comments.

- I understand that criticizing Jalonen's choices is almost forbidden today, but I still criticize.

Eemeli Finland and Elmeri Erone would have had use in that team.

Well, maybe sometimes someone has criticized Jalonen's choices before.

And maybe sometime before, there has still been gold.

Many would have liked to see Ilves' captain Eemeli Finland (right) at the World Championships.

- Someone might question Anttila's position on the team before Finland.

Would Mörkö be on the race plane if he hadn't hit in Bratislava?

- Marko Anttila's choice for the World Cup team before Eemeli Finland is quite an interesting preference.

- Are the screens from two years ago enough for Marko Anttila to see the captain in these competitions as well?

Mörkö is cranking a couple of important goals again, while the Lions are looking for more gold ...

Some were amused by social media expert opinions.

- Well, what do we think of the Lions team now?

I guess now there is a goalkeeper crisis and a shortage of packs and the middle ground is also weak?

Seriously, if we talk about it, it's nice that Olli Määttä is on the team.

I guess the Lions game is best piled up when the tournament starts.

If my fellow friends would train a Lion, then there would be an ace championship every year.

- Share it is AGAIN Lions quite a shit group of what here now is looked at by Finnish ruthless experts.

Now let’s play these races too first and then the summary.

- I am amused by these types of comments every year.

Especially when the team is piloted by three world championship winning coaches.

- Looks as bad as two years ago.

It looks as bad as two years ago, a grimace commented on the views of Finnish experts. Photo: Jussi Nukari / Lehtikuva

- Jalonen has not won three world championships in his career.

Can choose the right, not necessarily the best players for the teams.

- It looks pretty weak on paper, but the Lions have proven in the past that it means nothing when the real games start.

Everything in the semi-finals between dripping and the championship possible

- Perhaps a couple of grandchildren from the final teams would have fit into this bundle per se.

But the finals ended just and it’s not easy to lift players past the dudes in the camp and EHT.

Jukka Jalonen is a good role player and yes the race team makes a meaningful impact.

A couple of years ago, a similar chess won gold.

Stick to the small.

- This time there is at least one NHL player in the Lions competition team, but Olli Määttä describes well Jukka Jalonen's consistent way of thinking: a player who strengthens the team, but hardly swings the way of playing or chemistry in the wrong way.

And that was the hottest question among them: