International diplomacy gets under way after a new night of bombing in Gaza, with 10 members of a family killed

Israeli warplanes bombed central Gaza overnight and killed 10 members of a family in one of the attacks, according to medical sources, while this ... 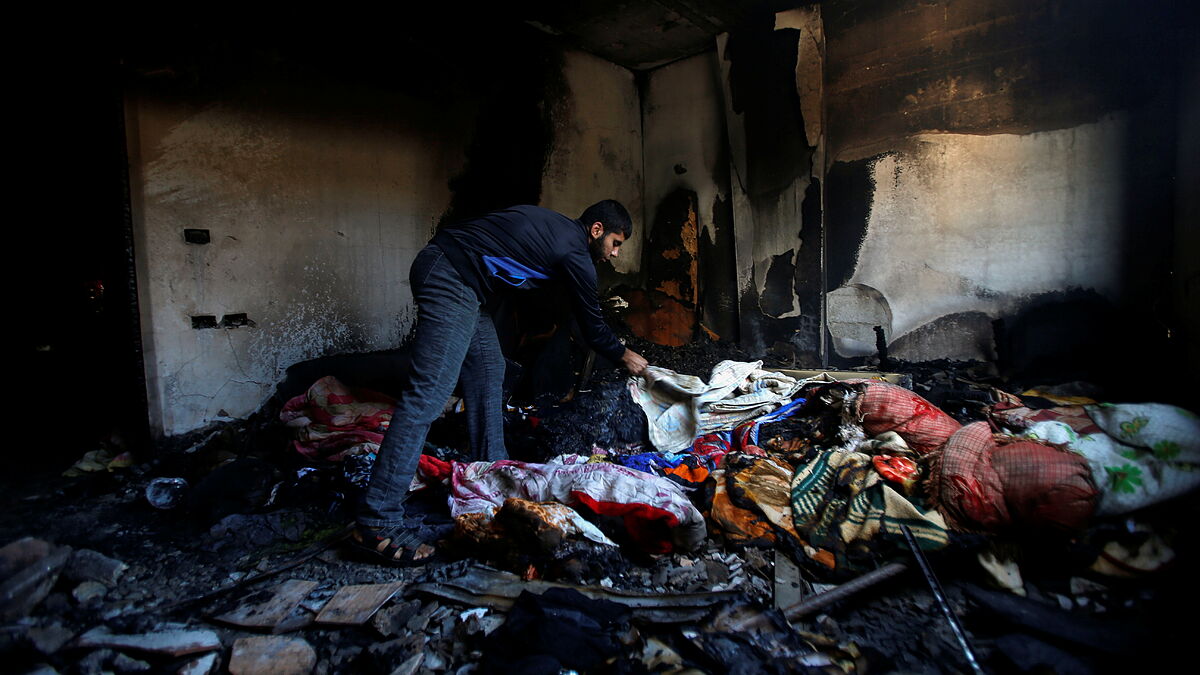 in one of the attacks

, according to medical sources, while a US envoy arrived on Saturday to begin negotiations.

The senior head of the US State Department for Israeli and Palestinian affairs,

, is due to meet with Israeli leaders in Jerusalem this Saturday, before meeting Palestinian officials in the occupied West Bank. The emissary wants to encourage both sides to

work towards a "lasting calm

The United States has been criticized for not having acted to stop the escalation of violence, after having

blocked a meeting of the United Nations Security Council

Although diplomatic efforts have been stepped up to end six days of violent clashes between Israel and Palestinian militants in Gaza, the Israeli military bombed several targets in the enclave on the night from Friday to Saturday, and from the Gaza Strip fired again. rockets heading for Israel.

Among the victims of these latest Israeli bombings are 10 members of the same family, eight children and two women, who died

in the Al Shati refugee camp

when the three-story building in which they were collapsed, according to medical sources.

The children "were safe in their home, they did not carry weapons, they did not fire rockets," said their father, Mohamad Abu Hatab, at the Shifa hospital in Gaza City.

Since Monday, at least

126 Palestinians have lost their lives

, and 950 have been injured, according to the latest report on Friday night by the Palestinian authorities.

Egypt opened its Rafah border post on Saturday to allow the entry of 10 ambulances with seriously injured Palestinians.

Since the start of the escalation, more than 2,000 rockets have been fired from the Gaza Strip into Israel, killing 9 people, including a minor and a soldier, and injuring 560.

Despite international calls for de-escalation, Israeli Prime Minister Benjamin Netanyahu has warned that his army will inflict "serious setbacks" on the "terrorist" movement Hamas, which controls the Gaza enclave.

"They are paying it and they are going to continue paying dearly. It is not over yet."

But the fronts are multiplying.

In the West Bank, from Nablus to Hebron and throughout the territory occupied by Israel since 1967, Palestinians throw stones, Molotov cocktails and other projectiles at Israeli forces, which they replicate with rubber bullets and sometimes live ammunition.

These clashes ended on Friday on the Palestinian side with 11 dead and about 250 wounded.

Nighttime riots were reported in the Shuafat neighborhood of East Jerusalem.

This Saturday, the Israeli authorities remain on alert, with

Palestinians commemorate the Nakba every 15 May, the "catastrophe" represented for them by the creation of Israel in 1948. Every year there are violent altercations with the Israeli army and settlers.

The new conflict erupted after the launch from Gaza of a rocket barrage against Israel in "solidarity" with the more than 700 Palestinians wounded in the riots with the Israeli police in the Esplanade of the Mosques in East Jerusalem, a Palestinian sector occupied by Israel since 1967.

The riots on the esplanade, Islam's third holy place, were the culmination of strong tensions and clashes in East Jerusalem, mainly due to the threat of expulsion of Palestinian families in favor of Jewish settlers in a neighborhood of the Holy City

On Saturday morning, alarms continued to howl in the south of the country.

The shelling and plumes of smoke, visible for miles around, have reduced residential buildings to ruins in the small Palestinian enclave where two million people are crowded.

Israel is also fighting on another front: the resurgence of intercommunity unrest in several mixed cities, where Jews and Palestinians with Israeli citizenship coexist, especially in Lod (center), Jaffa near Tel Aviv and Acre, in the north of the country.

Also, in the night, three rockets were fired from Syria, Israel's neighbor, without causing any damage.

And on the Israeli-Lebanese border, Israeli soldiers fired at Lebanese protesters who managed to briefly penetrate Israeli territory and a Hezbollah member participating in the demonstration was shot dead.

The Iron Dome: the great shield of Israel, under review

Middle EastThe Israeli ambassador to Spain: "We are almost in a war situation but this is not the time for a ground operation in Gaza"