In London, Madrid, Tunis, Baghdad ... Numerous demonstrations in support of the Palestinian people

Day of demonstration around the world. At the call of various organizations, rallies in support of the Palestinian people were organized in several countries, bringing together thousands of… 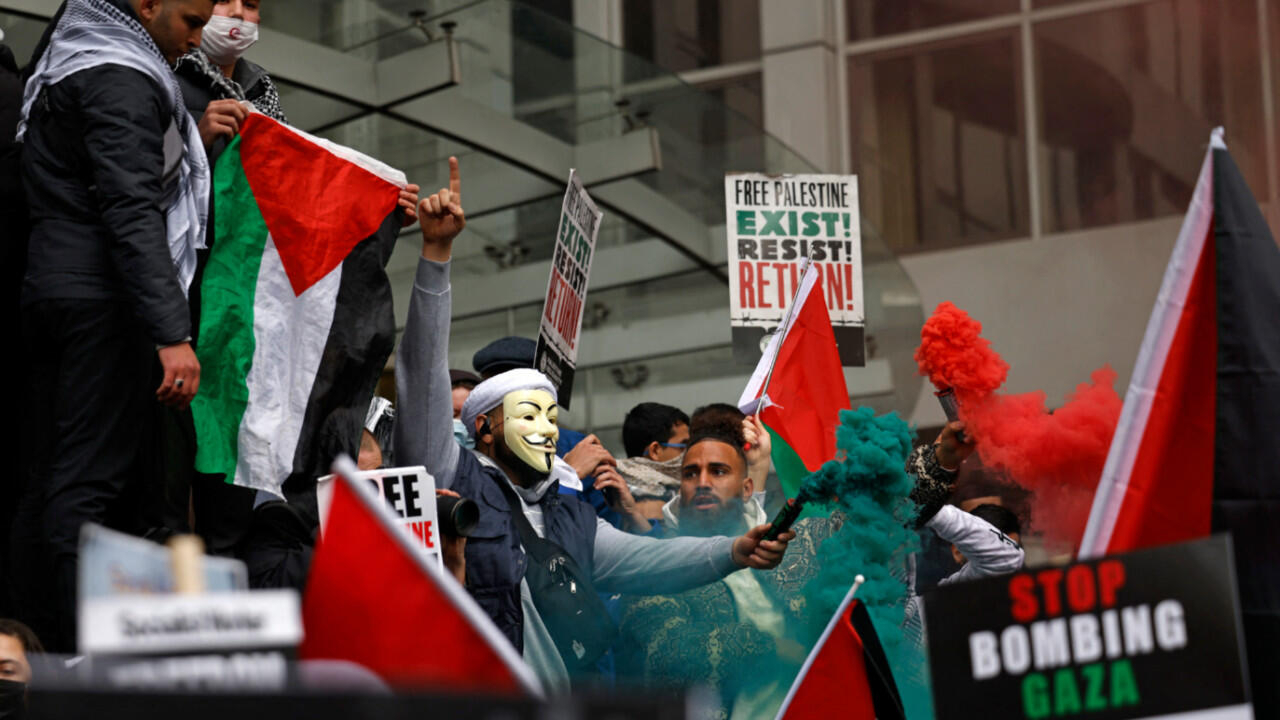 From London to Madrid via several French and Tunisian cities, demonstrations in support of the Palestinian people have multiplied on Saturday, May 15.

In Paris, supporters of the Palestinians gathered in Paris despite the ban and were immediately dispersed by the police, while several other gatherings, authorized, take place across France, bringing together several thousand people, especially in Strasbourg.

In the British capital, thousands of people called on the British government to intervene to stop the Israeli military operation.

Protesters gathered at midday at Marble Arch, next to Hyde Park, from where they walked towards the Israeli Embassy, ​​across the park, waving Palestinian flags and placards asking to "liberate" the Palestinian territories.

"The British government is complicit in these acts"

"It is essential that the British government take immediate action," said the organizers, including the Stop the War coalition, the UK Muslim association, the Palestine Solidarity Campaign and the Campaign for Nuclear Disarmament.

"He must no longer allow the brutal violence against the Palestinian people and their oppression by Israel to go unpunished," they added, denouncing the strikes that killed civilians in Gaza as "war crimes".

"The British government is complicit in these acts as long as it offers military, diplomatic and financial support to Israel," the organizers also said.

"Ask Spain not to collaborate with Israel"

In Madrid, around 2,500 people marched in peace, according to the national police.

"The silence of some is the suffering of others", "Jerusalem, the eternal capital of Palestine", could be read on the banners and placards held up by the demonstrators, among whom a large number of young women.

"It's not a war, it's a genocide!" Chanted the Spanish demonstrators as they climbed up from Atocha station to Place de Sol.

Many young people were wrapped in Palestinian flags.

"They are massacring us. We are in a situation in which the Naqba (the 'catastrophe' in Arabic) continues into the 21st century," Amira Cheikh-Ali, 37, daughter of Palestinian refugees, referring to the term used to refer to the exodus of Palestinians after the establishment of the State of Israel in May 1948.

"We want to ask Spain and the European authorities not to collaborate with Israel, because they collaborate by their silence" on the violence in progress in the Middle East, explained for his part Ikhlass Abousiane, 25, nurse of Moroccan origin like many participants in the event.

In Berlin, three demonstrations were authorized in the German capital for the single day of Saturday, including two in the popular district of Neukölln, in the south of the city.

Thousands of people gathered at the call of the collective "Samidoun" behind the slogan "march of the Palestinian people for liberation and return", waving Turkish and Palestinian flags, as well as placards calling for "boycott of Israel ".

The demonstrators shouted "free Gaza !," Palestinian live matter "or" Save Sheikh Jarrah ", a neighborhood in East Jerusalem where Palestinian families are threatened with eviction by Israeli settlers.

Protesters threw projectiles at the police, and several people were arrested, according to an AFP journalist.

The social distancing measures imposed due to the Covid-19 pandemic were not respected by the demonstrators, she noted.

Calls for demonstrations were also launched in other large German cities, such as Frankfurt, Leipzig or Hamburg, where several hundred people gathered, according to the German press.

Faced with this renewed tension in the Middle East, the German authorities fear a rise in anti-Semitism in the country, while on Tuesday evening, the flags of the Hebrew state were burned in front of two synagogues, in Bonn and in Münster.

In Iraq, thousands of supporters of Shiite leader Moqtada Sadr demonstrated in Baghdad and several other Iraqi cities in support of the Palestinians.

Gathered in Tahrir Square, in central Baghdad, under a huge Palestinian banner, demonstrators waved Palestinian and Iraqi flags as well as photos of Moqtada Sadr.

“Jerusalem is ours, Death to Israel”, “The world is against Palestine but God supports it,” read the banners.

"We are with the Palestinians for better and for worse," Moqtada Sadr said in a speech read by Sheikh Ibrahim al Jabari, his representative in Baghdad.

"Israel is trying by all means to reconcile the Arabs and the Muslims by normalizing its relations with a few states guided solely by their economic and financial interests, but the Palestinians will never bow their heads except to God," he insisted , in reference to several Arab countries which normalized their relations with Israel at the end of 2020.

In Tunisia, demonstrations were also organized in Tunis and in several other cities to demand the intervention of the international community in order to stop the "crimes" of the Israeli forces.

Hundreds of demonstrators draped in Palestinian flags gathered in the center of the capital Tunis, before marching on the emblematic avenue Habib Bourguiba, under police surveillance, noted an AFP journalist.

Among the slogans of the protesters - who defied the confinement in force until Sunday - we could hear: "Tunisians support Palestine" and "The people want to criminalize normalization with Israel".

“When it comes to the massacres against the Palestinians, the international powers remain silent and unresponsive in the face of Zionist crimes,” denounced Dalila Borji, a 23-year-old student. in addition the hatred of the people towards Israel and the countries which support it.

Palestine solidarity protest in #Tunis blocked by police near the MoI, marched to the nearby French embassy in Avenue Bourguiba instead #Tunisia #Palestine #Gaza https://t.co/uZ1MjAP0n2 pic.twitter.com/obhZs1H5Sl

Protesters also gathered in the Place de la Kasbah, near the seat of government in Tunis.

Other demonstrations in support of the Palestinians were also organized in Sfax and Monastir (center-east), according to witnesses and videos shared on social networks.