Israeli air strikes rained down on the Gaza Strip yesterday, as the "Qassam Brigades" of "Hamas" launched a barrage of rockets at Tel Aviv and other Israeli cities yesterday, on the sixth day of the fighting. A 12-storey building in Gaza housing offices and means collapsed. Media, including the agency A. 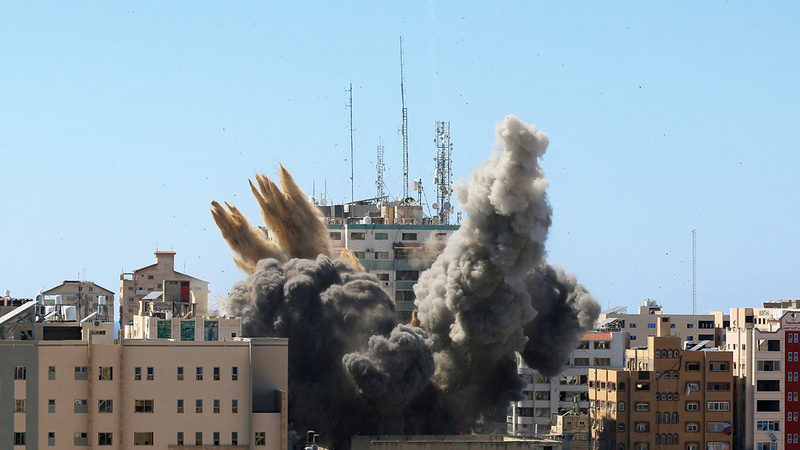 Smoke rose from the tower, which was destroyed by the Israeli bombing of Gaza yesterday.

Israeli air strikes poured into the Gaza Strip yesterday, while the "Qassam Brigades" of "Hamas" launched a barrage of rockets at Tel Aviv and other Israeli cities yesterday, in the sixth day of the fighting.

A 12-storey building in Gaza housing media offices, including the Associated Press and Al-Jazeera TV, in addition to other offices and apartments collapsed yesterday, after it was hit by Israeli missiles, and the agency expressed its "shock and dismay" after the Israeli army destroyed the tower.

The Israeli army announced that the tower was one of the headquarters of the "Hamas" intelligence, while White House spokeswoman Jane Saki said that the United States asked Israel to guarantee the safety and security of journalists.

Yesterday, telephone conversations took place between the Israeli Prime Minister, Benjamin Netanyahu, and the US President, Joe Biden, regarding the Israeli strike that destroyed the office building of the media outlets. The Israeli Prime Minister said, in a statement, that Netanyahu “stressed during these talks that Israel is doing everything Efforts to avoid harming people not involved in the conflict ”.

The Palestinian presidency said that President Mahmoud Abbas received an important phone call yesterday from Biden, in the first contact between the two leaders since Biden took office last January, and the call covered the latest developments and events in the region.

And 10 Palestinians from one family, eight children and two women, were killed in an Israeli raid, at dawn yesterday, on a residential house in the Shati refugee camp, west of Gaza City, according to the Palestinian Ministry of Health in Gaza.

American and Arab diplomats are seeking to calm the situation that has been simmering for about a week, but efforts have not yet succeeded to end hostilities.

Medics said that a missile hit a residential building in the Ramat Gan commercial suburb, killing a 50-year-old man.

The Israeli army said that its planes bombed rocket launch sites and apartments for Hamas operatives.

He added that one of these targets fired a barrage of rockets.

The envoy of US President Joe Biden, Deputy Assistant Secretary of State for Israel and Palestinian Affairs, Hadi Amr, arrived in Israel the day before yesterday, before a session held by the UN Security Council today to discuss the situation.

The US embassy said that the Biden envoy aims to "reinforce the need to work in order to achieve a viable calm."

Two Egyptian security sources said Egypt was working for a ceasefire so that talks could start.

Cairo is putting pressure on "Hamas" and calling on other parties, including the United States, to seek an agreement with Israel.

Mediators intensify their contacts with all parties in an attempt to restore the calm, but no agreement has been reached yet.

Yesterday, the Egyptian authorities opened the Rafah land border crossing with the Gaza Strip to bring ambulances into the Strip to transport the injured as a result of the Israeli bombing to Egyptian hospitals.