The Palestinian-Israeli conflict continues to heat up! The Israeli army attacked again, and the ground troops gathered in large numbers...

China News Service, May 15th. On the 14th local time, the Palestinian-Israeli conflict continued to heat up. The Israel Defense Forces launched a fierce attack on the Gaza Strip, including air strikes and shelling. At the same time, the Palestinian Islamic Resistance Movement (Hamas) is not to be outdone, and continues to launch rockets into Israel. The cumulative number of rockets launched has 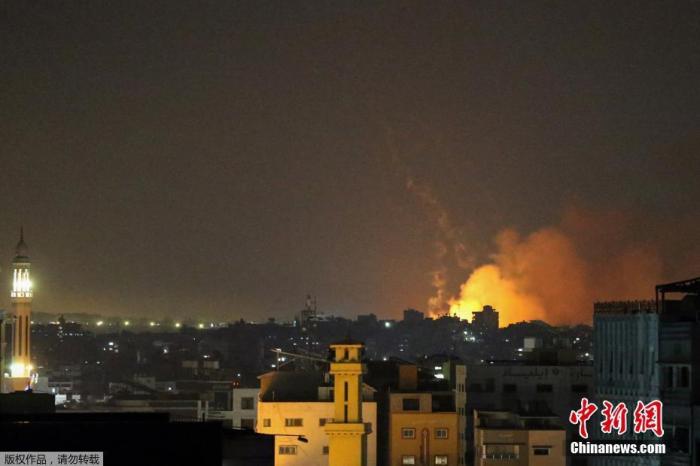 China News Service, May 15th. On the 14th local time, the Palestinian-Israeli conflict continued to heat up. The Israel Defense Forces launched a fierce attack on the Gaza Strip, including air strikes and shelling.

At the same time, the Palestinian Islamic Resistance Movement (Hamas) is not to be outdone, and continues to launch rockets into Israel. The cumulative number of rockets launched has exceeded 2,000.

On May 14, local time, Israel continued to launch air strikes on the Gaza Strip, and the flames of bomb explosions illuminated the night sky.

Hamas has launched more than 2,000 rockets

According to Israeli media reports, on the same day, about 160 Israeli military aircraft launched a large-scale attack on a tunnel network in Hamas.

In addition to the air strikes, Israeli armored forces and artillery also opened fire on the Gaza Strip along the border. The attack lasted more than an hour.

Israel Defense Forces spokesman Zilberman said that the implementation of this operation benefited from a large amount of intelligence and careful planning.

Gaza health officials said that since May 10, at least 126 people have died in the Gaza Strip, including 31 children and 20 women.

In addition, 950 people were injured to varying degrees.

On the other hand, Hamas is also continuing to launch rockets into Israel.

According to the Israeli military, since the beginning of the conflict, more than 2,000 rockets have been fired from Gaza to Israel, most of which have been intercepted by Israel’s "Iron Dome" air defense system, but some rockets have exploded in Israel.

According to Israeli authorities, eight people have been killed in the conflict in Israel, including two children.

On May 11, local time, in Gaza, a Palestinian woman with a child evacuated the building.

Conflicts broke out in many places in Israel

Recently, there have been violent conflicts between Jews and Israeli Arab minorities in many parts of Israel.

The Israeli police said they had arrested at least 23 people during the riots.

In addition, in order to oppose the actions of the Israeli army, a large number of Palestinians held demonstrations in more than 200 locations in the West Bank on the 14th.

Subsequently, the Israeli army drove the demonstrators away.

The Palestinian Red Crescent Society stated that the demonstrators were attacked by Israeli bullets and tear gas, and more than 500 Palestinians were injured.

According to the Palestinian Ministry of Health, nine Palestinians were killed by Israeli troops during the conflict in the West Bank.

Multinational mediation, the UN calls for a ceasefire

To ease the current tension between the two sides, the mediators of countries and organizations including Egypt, Qatar, and the United Nations are intensifying contacts with all parties. UN Secretary-General Guterres called for an immediate ceasefire.

However, the parties have not yet reached any ceasefire agreement.

On the US side, White House spokesperson Psaki said that the US is focusing on using US relations in the region to end the crisis diplomatically.

Ironically, the United Nations Security Council was unable to issue a joint statement on the Palestine-Israel situation at two meetings. This is because 14 of the 15 Security Council members participating in the meeting supported the statement, but only the United States opposed it.

At present, the Israeli side has assembled about 10,000 reserve soldiers and said that ground offensive is an option.

Many parties worry that if the situation still fails to cool down, the conflict may worsen into a full-scale war.