If Sebastian Tynkkynen (ps) wants to beat the longest continuous speech in Parliament, he must continue until one night. 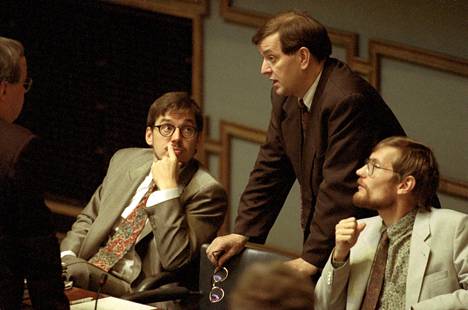 The strategy of prolonging the basic Finns in connection with the debate on the EU recovery support package in the plenary session of Parliament may have record-breaking features.

Member of Parliament Sebastian Tynkkynen began speaking in Parliament on Friday evening at 18.06.

At eleven o'clock, Tynkkynen had spoken continuously for about five hours.

Tynkkynen gives a so-called holding speech, which means delaying or preventing a vote in a parliamentary institution with continuous speeches.

Currently, the longest speech in the history of Parliament has been given by Vesa Laukkanen.

Laukkanen, who had previously resigned from Christianity, spoke in Parliament on the night of Saturday, November 5, and Sunday, November 6, 1994, for six and a half hours at a time, when he slowed down Finland's acceptance of EU membership.

If Tynkkynen intends to defeat Laukkanen by the length of his speech, he must continue to speak until one night.

Even if Tynkkynen breaks Laukkanen's 6.5-hour record on the night between Friday and Saturday, he still has a long way to go to talk as much in the braking debate as Laukkanen did in 1994.

Tynkkynen reads his speech on paper and without a mask, contrary to the Parliament's mask recommendation.