Naples, a chasm opens in a street: 40 families evacuated

The land in the Montesanto district yields, perhaps due to the rupture of a sewer pipe. No injuries. Already yesterday, failures were reported in some buildings 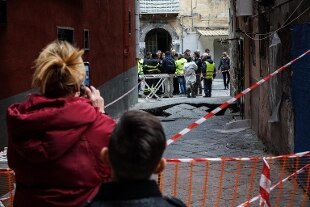 Evacuated as a precaution, after a chasm opened in the road that runs alongside their homes, perhaps due to the rupture of a sewer pipe. About forty families have had to leave their homes in Naples, in via Ventaglieri, in the Montesanto district.

Firefighters and Civil Protection had already carried out a series of checks yesterday because small failures had been reported in one of the buildings. At the end of the checks it was decided not to evacuate the buildings, but during the night the chasm opened.

"Perhaps the rupture of a sewer"

could have given way, which also damaged the water pipeline", said Sergio D'Angelo, head of Abc, the subsidiary of the Municipality of Naples that deals with the management of the water service. "We have interrupted the supply of water in the area - he said - and our technicians are there, on the spot. They will be able to intervene, I believe already within the day, as soon as the inspections and related interventions have been completed".

Residents: anomalies have been reported for months

One of the residents said that the doors in one of the evacuated buildings were blocked.

Some of them report that anomalies had been reported for months.

"A few months ago right here there was a great loss, at the end of the road - recalls Francesco Chirico, president of the Second Municipality of Naples, which includes the Montesanto district - The ABC technicians checked and said that there was nothing, but there remains a problem of monitoring and control ".

Naples, chasm in the street in Montesanto: dozens of families evacuated https://t.co/m71bm5996u