In the face of extreme temperature differences, how does the "Tianwen No. 1" and "Assault Suit" solve the problem of "Two Heavens Between Ice and Fire"?

Chinanews.com, Beijing, May 15th question: In the face of extreme temperature differences, how does the "Tianwen No. 1" and "Assault Suit" solve the problem of "Ice and Fire"?   Author Guo Chaokai Pinto Chen Yuan   On May 15, the "Tianwen No. 1" landing patrol successfully landed on Mars. "Tianwen No.1" can surpass "millions of waters and mountains" on this long journey. There is a "magic weap 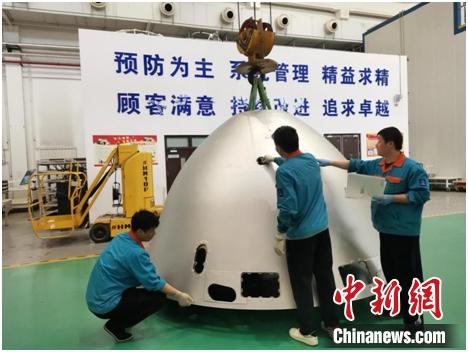 Chinanews.com, Beijing, May 15th question: In the face of extreme temperature differences, how does the "Tianwen No. 1" and "Assault Suit" solve the problem of "Ice and Fire"?

On May 15, the "Tianwen No. 1" landing patrol successfully landed on Mars.

"Tianwen No.1" can surpass "millions of waters and mountains" on this long journey. There is a "magic weapon" that must be mentioned, and that is the silver "charge suit" on its body.

The application orbits of this "Assault Suit" are mainly in the three segments of the ground fire transfer orbit, the Mars capture orbit, and the Mars mooring orbit.

From the moment it left the earth into space to the flight journey to Mars gradually, "Tianwen No.1" "rides through the wind and waves" under the protection of this "jacket".

"Jackets" can withstand more than 200 degrees of temperature difference

The scientific name of the "Assault Suit" of "Tianwen No.1" is a low absorption-low emission thermal control coating. It is a thermal control material coated on the outer surface of a spacecraft, through its own ability to reflect solar spectrum radiation, and Its own infrared radiation characteristics effectively reduce the temperature impact of the space environment on the interior of the spacecraft.

This "Jacket" was carefully developed by the 529 Factory of the Fifth Academy of China Aerospace Science and Technology Corporation for two years. Its successful development contains a number of independent key technologies.

The environment with a temperature difference of more than 200 degrees has a great impact on the normal operation of the internal equipment of "Tianwen No. 1".

In addition, the high vacuum characteristics of space make Tianwen No.1 unable to transfer heat through thermal convection or conduction like an airplane under the continuous irradiation of the sun. Therefore, the surface temperature of its sun-facing surface will continue to rise, causing the The temperature difference on the backside is huge.

At the same time, the continuous high-energy ultraviolet and ionizing radiation in space will also cause loss and damage to its appearance.

Therefore, it is particularly necessary to wear a special "Jacket" for "Tianwen No. 1".

Experts point out that this "jacksuit" has to resist high-energy ultraviolet radiation, atomic oxygen bombardment, and various high-energy particles and ionizing radiation attacks in space. It becomes a full-scale external protective barrier for the spacecraft. It can be described as "Tianwen No. 1". Full-effect protective clothing during the fire journey.

Special coating to solve the problem of "ice and fire"

The "Tianwen No. 1" "Jacket" adopts a type that has never been seen before in the field of thermal control coatings in China.

In order to develop this "Jacket", the R&D team first determined the two key technical indicators of low absorption and low emission of the thermal control coating based on the external heat flow characteristics of the overall thermal control designer for the entire process of "Tianwen No. 1" in orbit. , And then use these two technical indicators as a starting point to carry out a series of research and development work such as coating design, simulation, preparation, testing and engineering implementation.

After repeated trials, the R&D team finally succeeded in breaking through a number of key technologies for the development of low-absorption and low-emission coatings, and tailored this shiny silver "jackson" for "Tianwen No. 1".

Similar to other thermal control coatings, this "Assault Suit" has the characteristics of low absorption. Through its extremely low solar absorption ratio, it can effectively reflect most of the energy from solar radiation for a long time.

In this way, the problem of "ice and fire" within "Tianwen No. 1" can be effectively solved.

The difference is that the new "Jacket" is not only low absorption but also low emission, which is significantly different from other thermal control coatings that dissipate heat through high emissivity.

Researchers said that the reason for this design is that the journey of "Tianwen No.1" is in the deep cold space of space, and the heat generated by its internal engine will always be consumed to the outside world.

The flight time of the past 10 months has caused extremely high fuel consumption in the external cold environment, and excessive fuel storage will increase the weight of "Tianwen No. 1", which will give the spacecraft with "g gram calculation". Come the burden of weight.

Therefore, by reducing the infrared emissivity of the thermal control coating and reducing the radiant heat leakage from the cabin to the outside in a vacuum environment, the R&D personnel have successfully realized the temperature guarantee for the normal operation of the internal equipment of the landing patrol and ensured the "Tianwen No. 1" "The safety and comfort of this journey.