The situation in Palestine-Israel is escalating, and "full-scale war" is approaching? 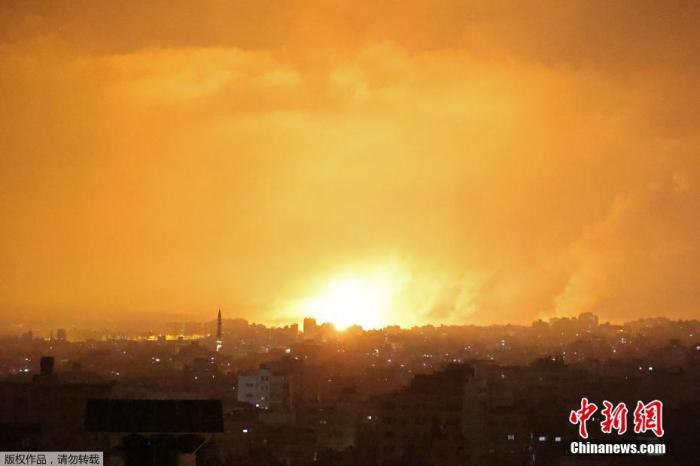 On May 14, local time, Israel threatened to "ground attack" the Gaza Strip. Although it was subsequently denied, it undoubtedly escalated the situation between Palestine and Israel that had been going on for many days, and caused the international community to worry about "all-out war."

In an interview with a reporter from China News Agency, Dong Manyuan, an expert on Middle East issues and a researcher at the China Institute of International Studies, pointed out that under the situation of “Israel and Pakistan are weak”, the possibility of “all-out war” is extremely low.

On May 14, local time, Israel continued to launch air strikes on the Gaza Strip, and the flames of bomb explosions illuminated the night sky.

In the early morning of the 14th, the Israeli military stated that it had begun a ground offensive against the Palestinian Islamic Resistance Movement (Hamas) in the Gaza Strip, which sharply escalated the tension in the Palestinian-Israeli conflict.

Dong Manyuan sorted out that the Palestinian-Israeli conflict was "detonated" by three factors.

One is that Israel continues to forcibly occupy settlements and occupy Palestinian lands. The second is that the Israeli government refuses the Palestinians in East Jerusalem to participate in the Palestinian elections scheduled for this month. The third is that Israeli military police blocked Palestinians from going to Aqah during the Islamic holy month of Ramadan. Sa Mosque fulfills the religious obligations of Muslims.

As for the underlying causes of the Palestine-Israeli conflict, Dong Manyuan pointed out that the two sides are still fighting over the ownership of the holy city of Jerusalem and the struggle surrounding Palestine's demand for the establishment of a fully sovereign Palestinian state with East Jerusalem as its capital.

Dong Manyuan believes that the reasons for the continuous occupation of Palestinian land are, on the one hand, the blind favor and "backing" of the successive U.S. governments towards Israel; on the other hand, the fact that Palestine has been assigned in the struggle for legal rights and interests, and the other is that it advocates peace. The main faction of the Palestine Liberation Organization negotiating, and the other faction is Hamas, which advocates Islamic Jihad, cannot form a joint force, making the struggle of the Palestinian people full of twists and turns.

The possibility of "total war" is extremely low

On the 14th, the Israeli Defense Forces threatened to declare a "ground attack" on the Gaza Strip, which caused the international community to worry about "all-out war."

Dong Manyuan said in this judgment that the possibility of a full-scale war is extremely low.

"The reason is that the pace and initiative of the entire battlefield are now controlled by Israel." Dong Manyuan pointed out that Hamas's military strength is far inferior to Israel, and only Israel has the power to end this conflict.

"The reason why it is not over yet is because Israel has not achieved its political and military goals of retaliating against Hamas."

Dong Manyuan said that for political purposes, a heavy blow to Hamas will help Netanyahu gain more popular votes, which is expected to come back and form a cabinet in the fifth election.

In addition, the conflict also showed that the Hamas rockets have greatly improved their capabilities, causing greater losses to Israel than in the 2014 Gaza War.

"The threat that Hamas poses to Israel has risen, so it is necessary to severely damage Hamas's military capabilities through this operation." Dong Manyuan said.

"I think the situation will escalate to a certain extent, because Israel's above-mentioned combat goals have not been achieved."

International mediation is worthy of attention

The escalation of the Palestinian-Israeli conflict has aroused serious concern in the international community.

China, the United States, Russia, France and others have also expressed their views and called for the restoration of peace.

What factors will influence the current situation?

How will the escalated conflict between Palestine and Israel end?

Dong Manyuan believes that an important factor lies in Israel, which holds the initiative on the battlefield, "Israel will stop if it thinks that it has achieved its combat goals."

At the same time, attention should also be paid to the ceasefire mediation efforts of the international community.

Now the entire international community hopes that the Palestinian-Israeli situation will cool down so as to prevent more innocent people from being harmed.

"This situation will create moral pressure on Israel, and it will also affect Hamas' next determination."

Dong Manyuan also pointed out that, more importantly, this conflict will arouse further attention from the international community on the Palestinian issue.

"The process of attention will expose the United States' favoritism and double standards to Israel over the years, and it will also pose a moral pressure on the United States." Dong Manyuan said, "I believe that through the mediation efforts of the international community, It will work in the end." (End)