The "Shalaq" trade is active through "social communication" before the Eid

Emirates Today has monitored the spread of websites and social media accounts promoting the sale of fireworks, or what is known as “Shalq”, as dealers of these prohibited items have been active in promoting them a few days before the Eid. The police authorities have warned against dealing with these accounts, And dangerous 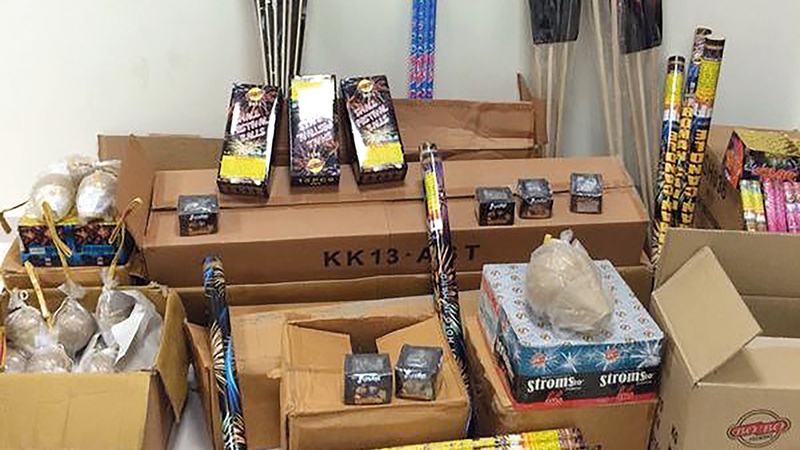 The police warned her and called to report her promoters

The "Shalaq" trade is active through "social communication" before the Eid

Emirates Today has monitored the spread of websites and social media accounts promoting the sale of fireworks, or what is known as “Shalq”, as dealers of these prohibited items have been active in promoting them a few days before the Eid.

The police authorities warned against dealing with these accounts, and the danger of fireworks on the lives of their users, especially children, and there are demands to increase the punishment for all dealers of these games as selling lethal materials.

In detail, during the past few days, and before Eid al-Fitr, advertisements have been active on websites and online accounts promoting fireworks within the country, and offers to their customers for various types of them, at reduced prices, when buying large quantities.

Police forces and specialists warned of the dangers of fireworks, known locally as "Shalaq", which some young people and adolescents use to celebrate the blessed Eid Al Fitr, as they confirmed that it could cause catastrophic damage if they explode as a result of storing them in a wrong way, resulting in injuries to the eyes, fingers and hands. And the various areas of the body, leaving permanent impairments or leading to death.

Children were subjected to burns in previous incidents at the state level, due to the explosion of fireworks while using them without awareness, and this led to burning parts of their bodies.

Lawyer Ali Musabah stressed that the punishment should be increased for anyone who violates the law who sold or helped sell these explosives and fireworks, as he is selling a killing tool to those who do not know its danger and injuries.

Musabih mentioned that on all global occasions around the world, we notice that peoples' joy lies in the organizational fireworks that are carried out with precautionary measures and security equipment at a high level, in anticipation of any emergency, and it is an obvious matter, but what causes concern is the sale and purchase of fireworks that are used in Most of them are made by young people and children for the purpose of entertainment and expressing their joy at Eid, but they pose a threat to their lives, especially as they have many forms and uses, which is very dangerous.

He warned that fireworks, or what is called in the local language "Shalaq", may not contain any safety measures in terms of their use with children and adolescents and cause a great disaster for them, as they may be quick to explode the moment they ignite and the person cannot avoid their flame and move away from them sufficiently or throw them in A remote place that infects his body, and causes burns or permanent disability in the case of an eye injury, for example, as well as what ignites and emits dense smoke from it that can lead to health damage, especially for those who have allergies, and the majority of the users of these games are young and some of them He may direct it to his friends to joke them, and he knows or may not know how dangerous these behaviors are.

Mosbeh pointed out that in the past these fireworks were sold in the markets, but after intense awareness and the dangerous accidents that resulted from their use, they were prevented, adding, “Now it has spread again and sold through websites, which leads to easy delivery, and in this way it threatens this category. Of adolescents and endangering their lives, therefore, the concerned authorities must follow these sites in the country to monitor them, arrest their suppliers and punish them, and this is not sufficient. Rather, parents should follow their children and prevent them from dealing with these sites.

For its part, Abu Dhabi Police warned against dealing with social media platforms that try to exploit children and adolescents by providing fireworks at low prices, calling for reporting the parties that promote them, warning of their risks that may cause health damage and house fires.

Lawyer Ali Musabeh called on community members in the event that fireworks sellers are monitored, whether through websites or street vendors, to report them and not let them spread these dangerous materials among children, and awareness must be spread in all media agencies and platforms to show the danger of fireworks to this generation and to address them. And punish the traffickers.

Lawyer Dr. Youssef Al-Sharif warned of the legal penalty for the fireworks trade, as he indicated that Article No. (50) of the Weapons and Ammunition Law stipulates that “Anyone shall be punished with imprisonment for a period of no less than a year and a fine of not less than 100 thousand dirhams or one of these two penalties. Without a license, he traded in fireworks, imported them, exported them, manufactured them, or brought them into and out of the country.