Support for Jerusalem and Gaza .. Casualties in renewed confrontations with the occupation in the West Bank

Al-Jazeera correspondent reported that many marches took place in the cities of the West Bank, this morning, to protest the Israeli aggression on the Gaza Strip and occupied Jerusalem, and a number of protesters were injured. 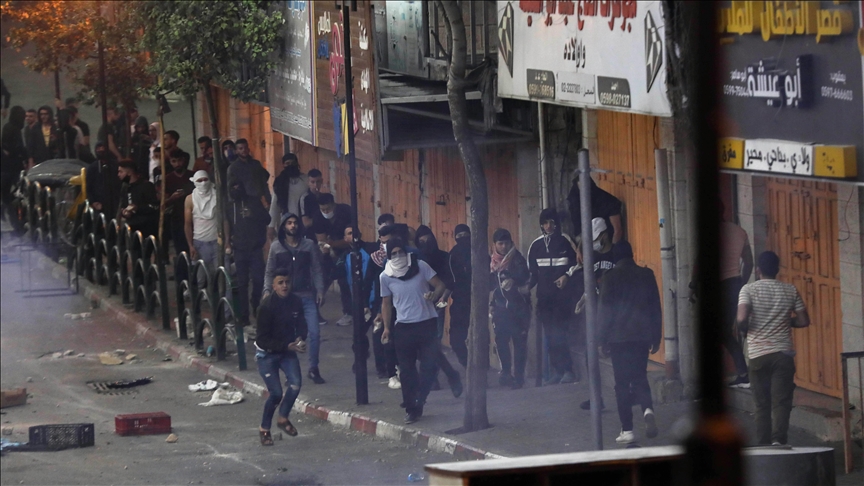 On Friday morning, many marches took place in the cities of the West Bank - according to the Al-Jazeera correspondent in Ramallah - to protest the Israeli bombing of the Gaza Strip and the attacks on occupied Jerusalem.

A number of protesters were injured in today's clashes, at a time when the occupation forces continue a campaign of arrests in the cities of the Green Line following Palestinian protests against Israeli practices.

Al-Jazeera correspondent Samir Abu Shamala said that clashes took place between Palestinian protesters and the occupation forces in the village of Nabi Saleh, northwest of Ramallah, as a result of which a young man was injured by live bullets, and others suffocated as a result of the occupation firing tear gas canisters.

He added that the protesters went out at the entrance to the village of Nabi Saleh to express their protest against the occupation practices in the Gaza Strip, and support for Jerusalem and the Al-Aqsa Mosque.

The Anadolu Agency reported that the Israeli army shot a Palestinian today near the Ofra settlement in the central West Bank for allegedly attempting to carry out an attack. The settlement is located near Ramallah.

And the occupation forces stated that the attempted attack did not result in any injuries.

The occupation forces carry out an arrest campaign in the town of Al-Issawiya in Jerusalem at dawn today pic.twitter.com/FEaTgu9XZV

The Red Crescent said, in successive statements, that its medical teams in the West Bank were attacked by the occupation forces, whether by physical attack or shooting, preventing ambulances from transporting the wounded or attacking Red Crescent vehicles.

The correspondent added that protests are expected to escalate in the West Bank after Friday prayers, following calls to demonstrate by Palestinian factions and youth groups to protest the Israeli aggression on the Strip and support occupied Jerusalem.

Since last Monday, 4 Palestinians have been killed in the West Bank, and hundreds have been injured, in separate confrontations with the Israeli army.

A delegation of Christian scholars, church leaders and national figures in Jerusalem managed to arrive today in the neighborhood to express its solidarity with the families threatened with expulsion from their homes, and to emphasize the national cohesion in Palestine.

The Al-Jazeera correspondent said that the occupation forces tried to obstruct the arrival of the Christian delegation.

The Sheikh Jarrah neighborhood is adjacent to the Temple Mount, in which the occupation seeks to expel Palestinian families from their homes and hand them over to settlers.

In the areas of the Green Line, the Al-Jazeera correspondent said that the occupation continues the campaign of arrests in cities and countries, and the Legal Center for Arab Minority Rights in Israel said that the occupation forces arrested 48 Palestinians in Haifa, 43 in Lod and 19 in Jaffa during the last night. Anadolu - The Israeli authorities released a large number of detainees with precautionary measures, the most prominent of which was house arrest for varying periods.

The occupation bet on the factor of time and the division of the Palestinian ranks and on Arab betrayals and dirty deals to obliterate the Jerusalem and Palestinian issue in the minds and hearts of the new generation, but today's reality lies its expectations, to be surprised by a Palestinian generation inside and outside the Green Line, its awareness and action has become fiercer as it prepares for the next battle # Palestine

Several Arab towns and cities are witnessing demonstrations by hundreds of Palestinians in support of Jerusalem and the Al-Aqsa Mosque, in protest against the escalating Israeli attacks during the past days.

Since April 13, the situation in the occupied Palestinian territories has exploded as a result of brutal attacks committed by the occupation police and settlers, in Jerusalem, the Al-Aqsa Mosque and its environs, and the Sheikh Jarrah neighborhood, following Israeli efforts to evacuate 12 Palestinian families and hand them over to settlers.

The Israeli attacks extended to the Gaza Strip, and according to the latest official Palestinian toll, the continuous aggression since Monday has resulted in the death of 119 civilians, including 31 children and 19 women, and the injury of 830.