Lindner: "Baerbock has to replace tactical cloudiness with clarity"

At his speech at the FDP party congress, chairman Christian Lindner gave swipes at Annalena Baerbock and Armin Laschet. His party has to be strong enough to prevent two possible coalitions. 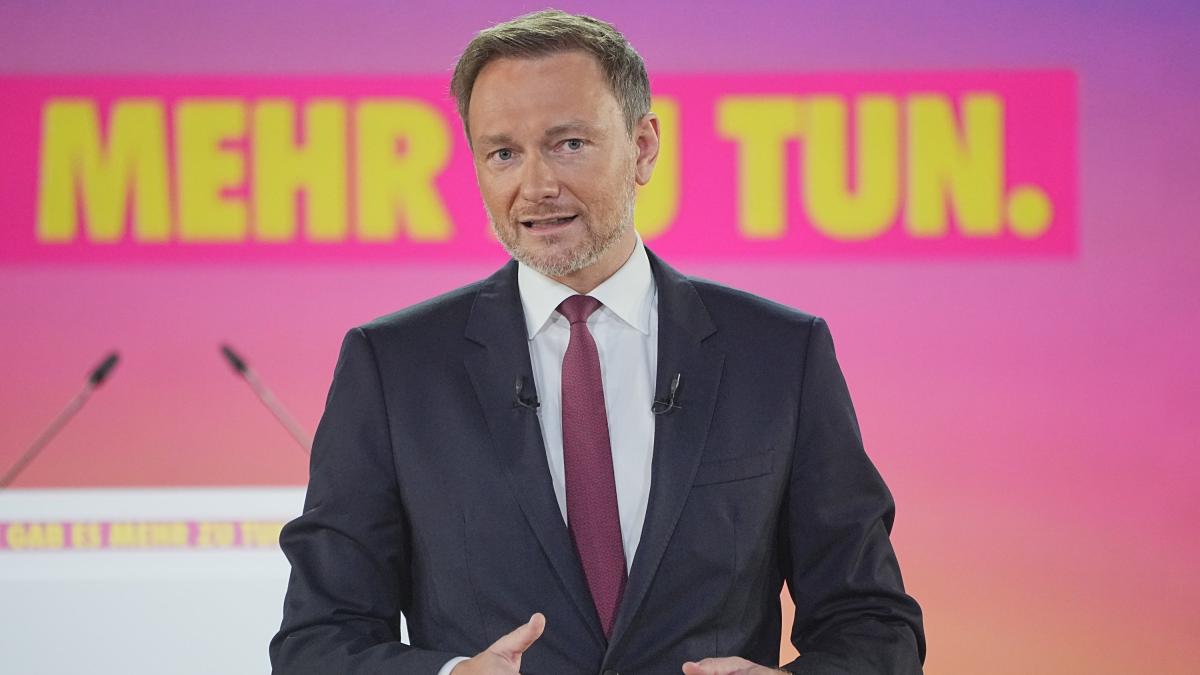 FDP leader Christian Lindner defined his party's goal in the federal election at the federal party conference on Friday in Berlin: "We have to go into double digits to prevent black-green and green-red-red."

He also gave swipes at the Union Chancellor candidate Armin Laschet and the Green Chancellor candidate Annalena Baerbock: “It would be wise not to leave Laschet alone with the Greens. Because in the end they will still merge. ”And he had these questions for 40-year-old Baerbock:“ How is she able to survive in crises? Would she also be elected to the Chancellery by the Left Party? "His demand:" You have to replace tactical cloudiness with clarity. "

Lindner also issued a sharp rejection of tax increases to cope with the Corona crisis.

On the contrary, his party wants to free the economy from barriers and relieve society down to the qualified middle, said Lindner.

“It is the market economy that drives the pegs on which the social net is hung.

It is the market economy that provides the funds that we can then invest in digitization and climate protection, ”he said.

Therefore, the first priority must be to work on the recovery of the economy after the crisis.

Lindner criticized the call for tax increases, which sometimes comes across as a political end in itself.

"That won't happen with us Free Democrats," said Lindner.

With a normal income, it must be possible in Germany to develop economic independence step by step and to live in a home at the end of working life.

“A high-tax country is not attractive for the bright minds and hardworking hands in the world that we as an aging society must invite to us in order to fill the positions that will become vacant in the near future because of a strong generation of Baby boomers are entering retirement age, ”said Lindner.

He reiterated criticism of the federal government's corona policy, which was too restrictive.

The FDP sympathizes with those who fear for their economic life's work and their existence.

In the federal election in September, the FDP wanted to achieve a result that would ensure that Germany would continue to be governed from the center.

“Business as usual” is the greatest danger for the future in Germany, said Lindner.

The greatest challenge is that in the German education system, success and advancement still play a role in the origin, the coincidence of birth.

"We have to reduce the hurdles for those who still want to achieve something," said Lindner.

FDP Vice Wolfgang Kubicki wants to see his party in third place in the federal election.

"My personal goal is for the Free Democrats to become the third strongest force in Germany again," he said at the federal party conference.

"We want to become so strong that there can be no serious government formation without us," said Kubicki.

"Let's work out the most liberal, the most sensible and the most practicable program together, which will be available for election on September 26," Kubicki called out to the 660 delegates.

They have to attend the party congress from home - because of the pandemic, the FDP meets largely digitally.

Kubicki also took a look back at the past year, in which the FDP had at times been well below five percent in surveys.

The criticism of the federal government's pandemic measures brought the party accusations of populism, lamented Kubicki.

Despite the headwind, however, the party had shown “stamina” and “nothing and no one” could put it off course.

“Without a doubt, we are needed,” assured Kubicki.

"For example, to finally make Germany digital." The FDP is also "the only force that relies on greater efficiency," he said.

"Anyone who calls for tax increases and talks about a property levy has not yet heard the shot."