Yesterday, the Gaza Strip witnessed a massive escalation after Israel launched intensive raids in response to rocket fire from the Strip, while confrontations renewed in the courtyards of Al-Aqsa Mosque between the Palestinians and the Israeli police, and dozens of wounded. 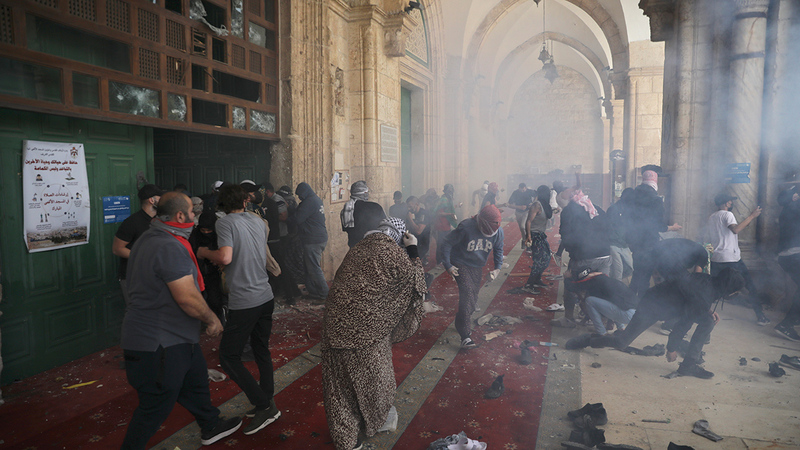 Renewed confrontations in the courtyards of Al-Aqsa Mosque

Part of the clashes in Al-Aqsa Mosque yesterday.

Yesterday, the Gaza Strip witnessed a massive escalation after Israel launched intensive raids in response to rocket fire from the Strip, while clashes renewed in the courtyards of Al-Aqsa Mosque between the Palestinians and the Israeli police, and caused dozens of wounded.

In detail, a spokesman for the Hamas Ministry of Health told AFP, “20 people, including nine children, were killed and 65 others were wounded, and a number of them were transferred to Beit Hanoun Hospital in the northern Gaza Strip” following the Israeli raids on Gaza.

"We started launching raids on Gaza, and I repeat that we have started ... we targeted a senior leader in Hamas," which controls the besieged Gaza Strip, the Israeli army spokesman said.

A source in "Hamas" confirmed that "the occupation targeted the leader of the Al-Qassam Brigades (the movement’s military wing) Muhammad Fayyad in Beit Hanoun in the northern Gaza Strip," confirming his death.

Before that, the Israeli army spokesman indicated that "seven rockets were fired from the Gaza Strip, one of which was intercepted by the Iron Dome."

A missile caused damage to a house about 15 kilometers from Jerusalem, where sirens sounded shortly after 6 pm, according to AFP correspondents.

This came after the Al-Qassam Brigades warned Israel that it should withdraw its security forces before 6 pm from the courtyards of the Al-Aqsa Mosque, which was an arena for confrontations.

I tell you, citizens of Israel, that the current conflict may continue for a certain period. ”

For its part, the United States condemned "with the greatest firmness" the firing of rockets at Israel, describing it as an "unacceptable escalation" and calling on all parties to "calm" and "defuse tensions."

In turn, London condemned the rocket fire and called for "an immediate containment of the escalation on all sides and an end to the targeting of civilians."

In addition, confrontations renewed yesterday between Palestinian worshipers and the Israeli police in the courtyards of the Al-Aqsa Mosque in occupied East Jerusalem, and dozens of injured people, the majority of whom were Palestinians, confronted hundreds of Palestinians retreating in the mosque in the last 10 days of Ramadan to prevent settlers from entering it. When international calls increased to contain the escalation, Israeli Prime Minister Benjamin Netanyahu announced his support for the police, while the Palestinian presidency described the events at Al-Aqsa Mosque as a "brutal attack on worshipers and a new challenge to the international community."

Hundreds of Palestinians threw stones at the Israeli police forces, who fired rubber bullets, stun grenades and tear gas in an attempt to disperse them, according to an AFP journalist.

The journalist spotted ambulances that were stationed outside the gates of the mosque, evacuating dozens of the wounded.

In a brief statement, the Palestine Red Crescent Society said that there are 278 injuries, 205 of which were transferred to Jerusalem hospitals and the Red Crescent field hospital.

"Most of the injuries are in the head, in addition to injuries to the upper and lower extremities and the chest, and some injuries with rubber bullets in the eyes," said Adnan Farhood, director of Al-Maqasid Hospital.

The head of the thoracic surgery department at the hospital in East Jerusalem, Firas Abu Aker, confirmed that "Three people lost their eyes yesterday."

Near the Lions Gate leading to the Old City, Palestinian youths threw stones at a car with Israelis inside, causing it to swerve towards them.

The youths continued to throw stones at the passengers after the car stopped, before an Israeli policeman arrived and fired in the air to drive them away.

"The Israeli police will continue to guarantee freedom of worship, but will not tolerate riots," the police stationed at the entrances to the Temple Mount said in a statement.

In the Old City of occupied East Jerusalem, the Israeli police prevented those who did not live inside from reaching it, and obstructed the movement of young people there, while its markets appeared empty.

Last week, the mosque's courtyards witnessed the most violent clashes since 2017, resulting in more than 200 injuries.

The Israeli Supreme Court postponed a session that was scheduled for yesterday regarding the expulsion of Palestinian families from the Sheikh Jarrah neighborhood to a later date set within 30 days, thus temporarily freezing the eviction decision that was issued earlier in the year.

In a statement, the White House stated that US National Security Adviser Jake Sullivan expressed in a phone call with his Israeli counterpart, Meir Ben Shabat, his deep concern about the Jerusalem clashes that were sparked by plans to expel Palestinian families from their homes in East Jerusalem.

The Secretary-General of the United Nations, António Guterres, warned of the continuing escalation of the situation, and called on the Israelis and Palestinians to show the greatest degree of restraint, adding that the United Nations reiterates its "deep concern" about the continuing violence in occupied East Jerusalem, as well as the possible expulsion of Palestinian families from their homes in Sheikh Jarrah neighborhood.

• America expresses "deep concern" about the clashes in Jerusalem and plans to expel Palestinian families.