According to the expert, the extremist organization has fired more rockets than before and the quality of the ammunition has also improved. 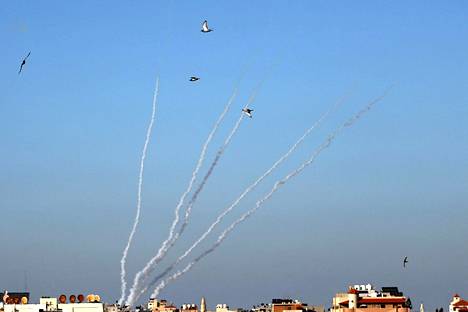 The number of rockets fired per day has been unprecedented and, in addition, longer-range rockets have been fired at Tel Aviv and Jerusalem.

According to experts, this is a sign that Hamas has succeeded in developing its missile arsenal, the New York Times reported.

Timo R. Stewart, a senior researcher at the Foreign Policy Institute, notes that Hamas has clearly developed as a rocket manufacturer.

- Virtually all rockets are currently manufactured in Gaza.

Iranian technology has also been smuggled into longer-range missiles, but apparently manufacturing takes place in Gaza.

And there has been a great deal of development here.

Hamas has managed to improve the quality, reliability and range of the rockets and has managed to manufacture them in staggering quantities, Stewart says.

According to Stewart, it is difficult to assess Hamas' ability to continue rocket attacks.

- Has Hamas already used its best rockets or is it the case that they still have the opportunity to escalate the situation by using something that has not been seen?

It is not known.

They have a completely different capacity when compared to, for example, this situation in 2014.

More rockets have been fired and the quality has been better.

So it’s not impossible for them to still have something hidden.

On the other hand, claiming so can also bluff well.

Hamas has fired up to a hundred rockets in a matter of minutes during the latest flare-up of the conflict. Photo: IBRAHEEM ABU MUSTAFA / Reuters

The Israeli intelligence service has estimated that there are about 30,000 rockets and grenade launchers in Gaza.

According to Stewart, the majority of these belong to Hamas, which rules Gaza, and only a small part to other militant groups.

The rockets held by Hamas can be divided into three groups.

Shorter-range rockets include, for example, the Qassam rockets introduced in the early 2000s, which have a range of only about 10 kilometers.

They are cheap to manufacture, but their flight paths are unpredictable and often fall inside Gaza’s borders.

- There are the most short-range rockets.

I’ve seen these collected in stacks near Gaza and they are metal pipes of different sizes and different thickness turned in a fist workshop, packed with explosives and a different piece of flying metal, Stewart describes.

The majority of the rockets in Gaza are held by Hamas.Photo: Mahmoud Al-Hende / ZUMA

The range of missiles is about 25 kilometers.

Their range already covers a large part of central Israel.

The long-range rockets are the M-75 and J-80, which can reach from Gaza to Tel Aviv, Jerusalem and Ben-Gurion Airport.

The numbers refer to their estimated ranges in kilometers.

On Thursday, Abu Ubaida, a spokesman for the Hamas military wing, also spoke of an even longer-range rocket: Ubaida said the organization had fired a new rocket called Ayyash 250 towards Ramon International Airport in Eilat.

The range of the rocket was claimed to be 250 kilometers.

Israel has denied that Hamas fired a rocket at the airport.

- Practically this would be able to shoot anywhere in Israel.

Most of Hamas rockets are blocked by the Israeli Iron Dome system.

However, the system is not seamless.

According to the Jerusalem Post, the control effectiveness of the system has been about 85-90 percent in the past.

According to the newspaper, this is true when a small number of rockets are fired at once.

Now, however, Hamas has been able to fire up to a hundred rockets in a matter of minutes, including several targeting Tel Aviv, less than a hundred kilometers from Gaza.

According to Stewart, Hamas is clearly trying to fire a lot of rockets to lower Iron Dome's combat safety.

However, he said, it is uncertain whether Hamas has found a weak point in the Israeli defense system, as the rejection rate remains high.

- I think it is possible that this works to some extent that if sent a hundred at a time, there is a greater probability that some will get through than that shot one by one.

But how much it lowers control certainty cannot be said.

Stewart believes the latest flare-up of the conflict will eventually end in a ceasefire, although Israel has not yet expressed a desire to end the attacks.

Stewart believes Israel is likely to make further efforts to destroy Hamas ’ability to carry out rocket attacks before agreeing to a ceasefire.

The researcher does not consider a ground attack on Gaza likely.

- The death toll will rise then and Israeli soldiers will also die.

In addition, there has been considerable unrest within Israel, as well as in the West Bank, and I think that, because of this, too, they will avoid taking ground troops to Gaza.

While the Israeli attacks have caused more than a hundred Palestinian deaths and hundreds of injuries, Hamas has also benefited from the ongoing violence, Stewart says.

- Hamas took a stand on the situation in Jerusalem with rockets and has raised the prestige and credibility of the organization in the eyes of many Palestinians. Especially since the Palestinian Authority has been on the sidelines and the problem has been that it is seen as a corrupt occupation subcontractor doing the dirty work for Israel.