More than 300 wounded, with renewed confrontations in the courtyards of Al-Aqsa Mosque

On Monday, the ongoing confrontations between Palestinian worshipers and the Israeli police in the courtyards of Al-Aqsa Mosque in occupied East Jerusalem left more than 300 wounded, most of them Palestinians, after a week that was marked by violent clashes. 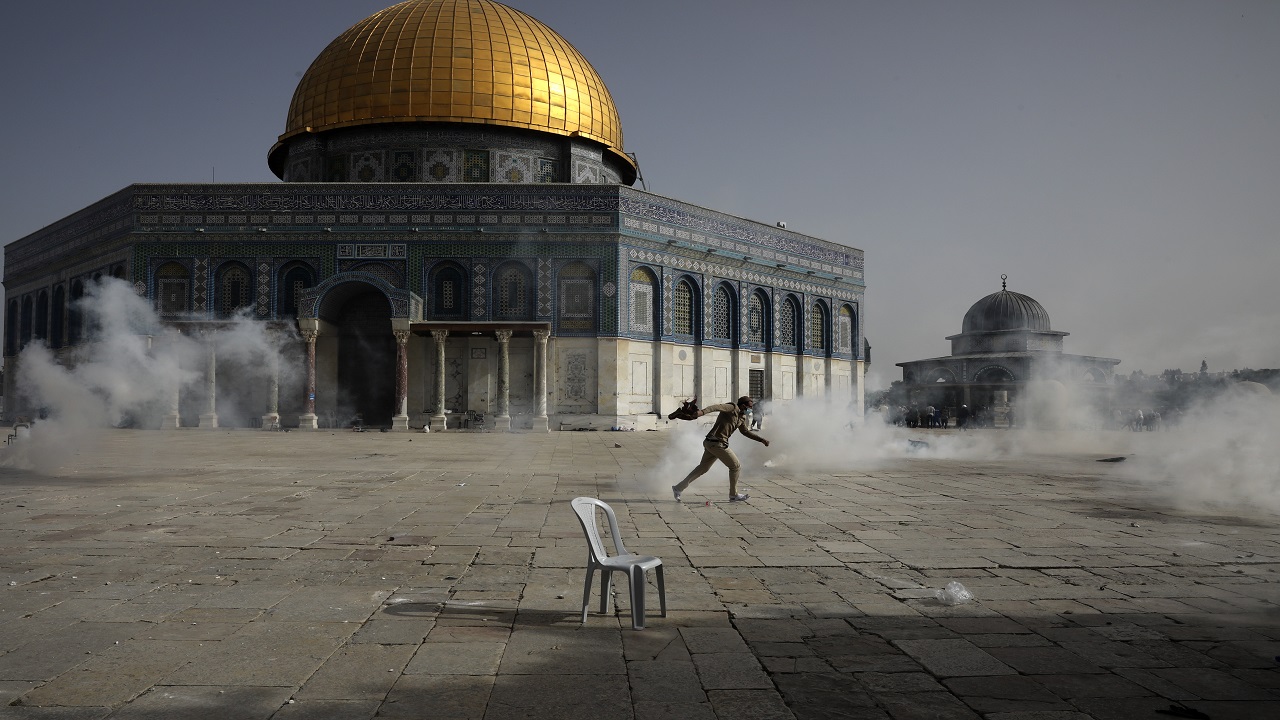 More than 300 wounded, with renewed confrontations in the courtyards of Al-Aqsa Mosque

On Monday, the ongoing confrontations between Palestinian worshipers and the Israeli police in the courtyards of Al-Aqsa Mosque in occupied East Jerusalem left more than 300 wounded, most of them Palestinians, after the end of a week marked by violent clashes.

With the deterioration of the situation, the UN Security Council held a closed session on Monday, at the request of Tunisia, to address the situation in East Jerusalem, which Israel occupied fifty years ago.

While international calls for containing the escalation increased, Israeli Prime Minister Benjamin Netanyahu announced his support for the police in what he said was a "just struggle", denouncing what he considered "deceptive and false coverage by the international media" of what is happening in Jerusalem.

The Palestinian presidency described the events at Al-Aqsa Mosque as a "brutal attack on worshipers and a new challenge to the international community," while the head of the Hamas political bureau, Ismail Haniyeh, stressed that "the resistance will not stand idly by, and its word will be the final word in the battle."

The confrontations renewed on Monday after hundreds of Palestinians who were retreating in the mosque in the last ten days of the month of Ramadan to prevent settlers from entering it, as Israel commemorates Monday the "Day of the Unification of Jerusalem," meaning its occupation of East Jerusalem in 1967.

Hundreds of Palestinians threw stones at the police, who responded with rubber bullets, stun grenades and tear gas in an attempt to disperse them, according to an AFP journalist.

The journalist spotted ambulances that were stationed outside the gates of the mosque, evacuating dozens of the wounded.

The Palestine Red Crescent Society said in a brief statement that there were "278 injuries, 205 of which were transferred to Jerusalem hospitals and the Red Crescent field hospital."

"Most of the injuries are in the head, in addition to injuries to the upper and lower extremities and the chest, and some injuries with rubber bullets in the eyes," said Adnan Farhood, director of Al-Maqasid Hospital.

The head of the thoracic surgery department at the hospital in East Jerusalem, Firas Abu Aker, confirmed that "three people lost their eyes today."

Near the Lions Gate leading to the Old City, Palestinian youths threw stones at a car with Israelis inside, causing it to swerve towards them.

The youths continued to throw stones at the passengers after the car stopped, before an Israeli policeman arrived and fired in the air to drive them away.

The police stationed at the entrances to the Temple Mount said in a statement, "The Israeli police will continue to guarantee freedom of worship, but will not tolerate riots. (...) We will not let extremists threaten public security."

The Israeli police prevented settlers who began gathering at the Al-Buraq Wall (or the Western Wall for Jews) nearby, which is the holiest place for Jews, from entering the courtyards.

According to an AFP correspondent, the entry of worshipers to the mosque's courtyards has resumed, with the Israeli police determining ages, preventing those over the age of forty from entering.

"They want to empty Jerusalem"

In the Old City of occupied East Jerusalem, the police prevented those who did not live in it from reaching it and obstructed the movement of young people there, while its markets appeared empty.

Aseel Abu Qutaish, 23, described the situation as "tragic. They want to empty Jerusalem and Sheikh Jarrah and seize it."

"The soldiers and the police depend on their weapons, the young men of Jerusalem are isolated and their strength is unequal," she added.

For his part, Alaa Al-Din Al-Zahika, 45, said, "They (Israel) are hateful and do not want peace. Every year they organize a march. We must stay and not leave the city."

Israel considers all of Jerusalem, including the eastern part of it, its "united" capital, while the Palestinians insist on making East Jerusalem the capital of the state they aspire to establish.

The mosque witnesses from time to time tensions between worshipers and the Israeli police because of the Palestinians' refusal to enter the Jews, as they enter at specific times and prevent them from praying there, considering this step a provocation to their feelings.

Last week, the mosque's courtyards witnessed the most violent clashes since 2017, resulting in more than 200 injuries.

Relative calm returned to the courtyards of the Al-Aqsa Mosque on Saturday and Sunday, but confrontations continued between Palestinians and Israelis in other neighborhoods of East Jerusalem, resulting in the fall of more than a hundred wounded, according to the Palestinian Red Crescent.

On Sunday, the Israeli Supreme Court postponed a hearing scheduled for Monday regarding the expulsion of Palestinian families from the Sheikh Jarrah neighborhood to a later date set within thirty days, thus temporarily freezing the eviction decision that was issued earlier in the year.

This file constitutes one of the main causes of tension in East Jerusalem in recent weeks.

The Israeli army announced that four rockets were launched Sunday from Gaza at southern Israel, as well as incendiary balloons, which led to the outbreak of 39 fires in Israeli territory, according to the fire service.

On Monday morning, the Israeli army announced that it had "bombed Hamas terrorist targets in Gaza in response to the incendiary balloons and four rockets launched from Gaza at Israel yesterday," without further details.

On Sunday night, hundreds of protesters gathered at the border between Gaza and Israel, some of them equipped with incendiary equipment, according to an "AFP" correspondent.

Fearing the worsening of the situation, the United States, Israel's primary ally, called on "Israeli and Palestinian officials to take action to put an end to the violence," expressing concern about "the possibility of expelling Palestinian families from Sheikh Jarrah."

Egypt and Jordan condemned the repression practiced by Israel over the weekend in the courtyards of Al Aqsa.

The United Arab Emirates, Bahrain, Morocco and Sudan also expressed their "deep concern", calling on Israel to calm down.

Both the International Quartet Committee for the Middle East and Pope Francis called for calm.

The United Nations urged Israel to "the utmost restraint," while Turkey called on "the world to take action to put an end to the continuing Israeli aggression."