Temperatures above 20 degrees will break on Tuesday in large areas of western Finland. There are opportunities for heat this week. 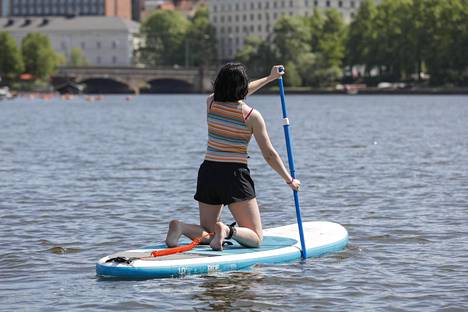 Temperature readings of 20 degrees, which means a full summer, will be broken on Tuesday in large areas in western Finland, but also inland.

- The whole of Western Finland, Pirkanmaa, Central Finland, Southern Ostrobothnia and Central Ostrobothnia, there will be about twenty breaks, on-call meteorologist Anna Laitila from Foreca predicts.

A foretaste of what was to come was already received on Monday, when the temperature in Uusimaa rose at a rapid pace.

Within a few hours, the chilly ten-degree spring weather changed into a summer weather of almost twenty degrees.

- At the Lohja Porla weather observation station, 19.8 degrees were reached, which is a heat record for the year, Laitila says.

This is not an extremely rare weather phenomenon.

- When a meteorologist talks about a rare weather phenomenon, then it means a phenomenon that occurs once every ten years or less.

For the average saver, the criteria for the rare are more easily met.

The rapid rise in heat was due to the sum of two meteorological phenomena.

Then the sun started to shine and heat up, Laitila said.

From Tuesday onwards, more warm avalanches will flow to Finland.

On Monday afternoon, meteorologist Juha Jantunen of the Finnish Meteorological Institute tweeted a picture of the temperature observations at 1 pm. The picture shows how temperatures in the Baltic countries had already reached temperatures above 20 degrees on Monday.

- Twenties are still lurking in the Baltics today, Jantunen wrote.

- Warm air is pushing from the south, the meteorologist of the Finnish Meteorological Institute Jani Parviainen sums up.

The Heller border may break on Wednesday

Parviainen says that the night before Tuesday is already warm, and the temperature in the southern parts of the country will remain at about ten degrees.

Tuesday morning the interior of the country may already be 15 degrees warm.

The warmest Tuesday is from 3 to 6 pm, when the temperature rises above 20 degrees in some parts of the country.

On Tuesday, warm air reaches the central parts of the country, and temperatures above 20 degrees are possible at the height of Kuopio.

Parviainen says that on Wednesday the hell border is close to breaking in Ostrobothnia.

On the coasts, the wind cools the air to the point that it is a little cooler than inland.

From Wednesday onwards, the height of Oulu will also reach close to 20 degrees.

In May, the heat is not annual

Foreca meteorologist Joanna Rinne writes in Foreca's weather blog that in May, warm air mass and sun are required to achieve heat.

The possible heat of the coming days is due to the fact that the low-pressure centers currently in the Atlantic and east of the Black Sea are approaching each other and squeezing the warm air between them.

Rinne writes that heat is not allowed for a large area this week, but it is possible that the first heat limit crossings will be measured this week.

Monday turned white in many places rainy in the southern and central parts of the country.

Soon, however, the weather is about to change.

- During the day, however, the weather is already starting to clear and rain from the south coast, says Ari Mustala, the meteorologist on duty at the Finnish Meteorological Institute.

Warm air from Central Europe is beginning to flow to Finland.

- High pressure is best maintained in Finland from Tuesday to Thursday.

According to the forecast, a large part of the country will be dominated by summer heat as well as sunny weather.

Twenty-degree temperatures are promised until Thursday in much of the country.

It is even possible that the heller limit (25 degrees) may be exceeded.

Rider in Helsinki Zoo Bay in May 2018. Photo: Antti Hämäläinen / IS

Where could we most likely end up crossing the Heller limit and when?

- According to the forecast, temperatures on Tuesday in Finland could be 22 degrees.

The warmest is in the Lahti, Kouvola and Lappeenranta regions, which means that crossing the border is most likely there, Mustala says.

According to Mustala, Wednesday is becoming an even slightly warmer day than Tuesday.

There will be 23 degrees for Southern Ostrobothnia and Satakunta.

- On Wednesday, the warmest is in the Kankaanpää and Seinäjoki regions.

So those areas are closest to breaking the hell border, he says.

Helleraja is still in a hurry on Thursday.

- The high pressure is moving towards Northern Ostrobothnia, where it can be extensively 24 degrees warm.

The crossing of the Helleraja could most likely take place in Ylivieska, Sievi and also in Southern Ostrobothnia in Seinäjoki, Mustala says.

According to Mustala, the high pressure will start to give way to Finland on Friday.

- The weather is becoming more unstable, so the readings are not as hard then as on Tuesday, Wednesday and Thursday.

According to statistics from the Finnish Meteorological Institute, since 1961, an average of three hot days have been measured each year.

However, the heat of May is not annual.

In some years there may be several hot days, in others none.

The highest temperature measured in the first half of May is 29.6 degrees, which was measured at Kruunupyy Airport on 14 May 2010 and in Kemiönsaari, Vantaa and Kouvola on 15 May 2018.