The fall of the remains of the Chinese missile in the Indian Ocean ... and criticism from "NASA"

Yesterday, the Chinese authorities announced that a large part of a Chinese space missile disintegrated over the Indian Ocean after entering the Earth's atmosphere, putting an end to speculation about the location of this 18-ton object. 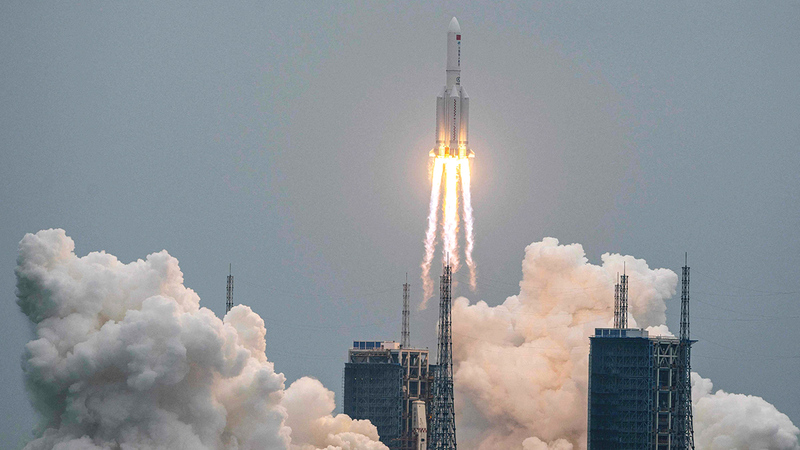 The fall of the remains of the Chinese missile in the Indian Ocean ... and criticism from "NASA"

A large part of the Chinese "Long March 5B Yao-2" missile disintegrated over the Indian Ocean.

The Chinese authorities announced yesterday that a large part of a Chinese space missile disintegrated over the Indian Ocean after entering the Earth's atmosphere, which puts an end to speculation about the location of the fall of this 18-ton object.

"After monitoring and analysis, at 10:24 pm (02:24 GMT) on May 9, 2021, the debris of the last stage of the Long March 5B Yao-2 launch vehicle returned," state television quoted the "Chinese Manned Space Engineering Bureau" To the atmosphere.

He added that "the subsidence zone is located at 72.47 degrees east longitude and 2.65 degrees north latitude", which is the coordinates of a point located in the Indian Ocean near the Maldives.

The same source explained that the bulk of the missile was disassembled and destroyed during the return.

This missile carried the first components of the new Chinese space station into Earth orbit on April 29.

"The operators confirm that the missile entered the Indian Ocean, north of the Maldives," the monitoring service "Space Track", which uses US military data, said in a tweet.

The missile's path was in line with experts' expectations of its fall in the Indian Ocean, because water covers 70% of the Earth's surface.

Officials in Beijing previously stated that there is little chance that the "Long March 5B" missile will follow a free path upon its fall.

For his part, the head of the US Space and Aviation Administration (NASA) Bill Nelson said in a statement, "Space-going countries should reduce to the minimum the dangers to people and property on Earth when space objects re-enter the atmosphere, and enhance transparency regarding these operations to the maximum degree." .

"It is clear that China has failed to meet the standards of responsibility with regard to its space debris," he added.