Juventus on the mat, Milan celebrates at the Stadium: 0-3

Great performance of the Rossoneri who pass to Turin thanks to goals from Brahim Diaz, Rebic and Tomori and thus hook Atalanta in second place at 72 points, 2 more than Napoli fourth. For Pirlo's bianconeri, now in fifth place with 69, the race for a place in the Champions League is heavily complicated&nbsp; 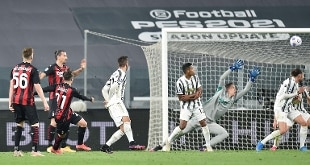 A golden success in the fight for a place in the Champions League for the Rossoneri who thus hook Atalanta in second place at 72 points, 2 lengths of margin over Napoli, fourth, and 3 over Pirlo's bianconeri, fifth and right now outside the Europe that matters.

Good start for Juve, already dangerous at 4 'with a platter with a sure shot by de Ligt' walled 'by Theo Hernandez. The Rossoneri showed up with a strong but central right-foot from Brahim Diaz to save Szczesny (21 '). At 30 'on a corner kick, after an empty exit from Donnarumma, Chiellini with his head puts a little wide. Excellent Rossoneri chance with a breakaway to the left by Theo Hernandez who reaches the back and puts strong in the middle for Ibra who is anticipated by Alex Sandro who sends for a corner (37 '). Another descent by Hernandez in the 44th minute, a cross deflected by de Ligt who still engages Szczesny. At the end of the first half the Milan advantage arrives: Calhanoglu's punishment from the trocar, the Juventus goalkeeper freaks out, but the ball ends up right on the feet of Brahim Diaz who, thanks to a rebound, skips Cuadrado,then he focuses and with a powerful and precise right turn, he puts in the seven, it is 0-1 (46 ').

The second half began with a great save by Donnarumma on a close shot from Bentancur after a Cuadrado-Morata exchange, with an assist from the Spaniard (47 '). At 56 'again Diaz protagonist in the Juventus area, shot towards the goal that is' stopped' by Chiellini's arm, Valeri does not see, but is recalled to the Var and assigns the penalty. From the spot Kessie, however, is hypnotized by Szczesny who stretches out and sends for a corner, remains 0-1 (58 '). Problems for Ibrahimovic, the Swede is forced to leave, Rebic enters (66 '). In Juve Pirlo sends Kulusevski to Bentancur (67 '). Ronaldo tries to free himself well, but kicks very high (68 ').

A very tired Brahim Diaz, great protagonist of the evening, also comes out on the Krunic field (70 '). Milan doubles in the 78th minute: Bennacer unloads for Rebic who comes towards him, turns and from almost 20 meters hits the corner a really powerful platter, Szczesny petrified, is 0-2. It's up to Dybala who replaces Chiesa (79 '). Other changes also for Pioli who removes Saelemaekers and Bennacer to make way for Dalot and Meite (82 '). Rossoneri on the velvet and at 83 'comes the trio: another punishment from Calhanoglu's trocar, an imperious head-off by Tomori who beats the Polish goalkeeper for the third time. Final with Juve in search of the goal that could rebalance the direct comparisons after the 1-3 of the first leg at San Siro. Dybala tries above all, but the score doesn't change anymore, it's 0-3.