The Indian authorities have begun to use hundreds of former army doctors to support the health care system, while the country faces record numbers of "Covid-19" injuries and deaths, amid angry calls for a comprehensive general isolation across India. While the number of people infected with the virus worldwide exceeded 156.9 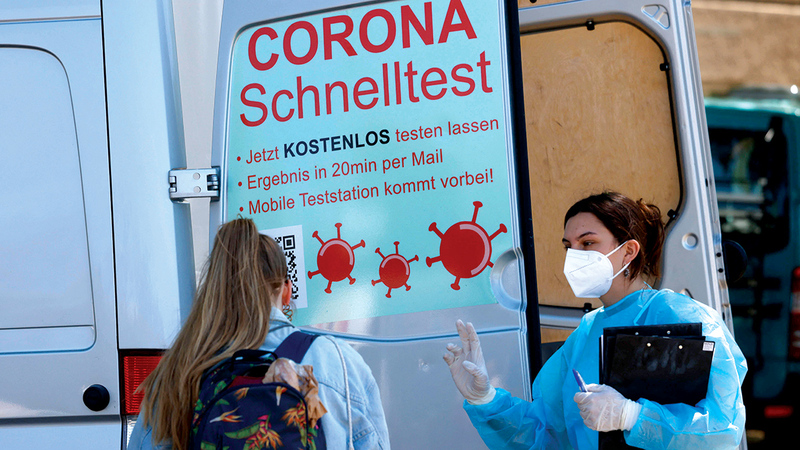 A German nurse talks to a young woman at a mobile rapid test center for "Corona" working from a truck in Berlin.

The Indian authorities have begun to use hundreds of former army doctors to support the health care system, while the country faces record numbers of "Covid-19" injuries and deaths, amid angry calls for a comprehensive general isolation across India.

While the number of people infected with the virus in the world exceeded 156.94 million, the chief medical advisor to US President Joe Biden, and director of the National Institute of Allergy and Infectious Diseases, Anthony Fauci said that there is "no doubt" that the United States has reduced the number of actual deaths caused by "Covid-19". », Which now amounts to more than 581 thousand deaths.

In detail, the Indian Ministry of Defense announced yesterday that the authorities will use hundreds of former army doctors to support the health care system in India, which is facing record numbers of "Covid-19" injuries and deaths.

In a press statement, the ministry said that about 400 medical officers are expected to work under a contract for an 11-month period at most, adding that other military doctors from the army will provide online consultations.

Coronavirus cases and deaths in India are registering unprecedented levels every two or three days.

The deaths jumped to more than 4,000 cases for the second day in a row yesterday.

Many states imposed strict lockdown measures over the past month to curb the spread of the virus, while other states announced restrictions on movement and closed movie theaters, restaurants, bars and shopping centers.

But pressure is mounting on Prime Minister Narendra Modi to declare the nationwide lockdown that was imposed during the first wave last year.

The Medical Association of India, the umbrella under which all doctors and surgeons fall under, called for the imposition of a "comprehensive, well-planned and pre-announced" general isolation throughout the country, instead of the "intermittent" night curfews and the restrictions imposed by states for a few days each time.

The association said in a statement that it is "amazed at the extreme indifference and inappropriate measures taken by the Ministry of Health to combat the dire crisis resulting from the deadly second wave of the (Covid-19) pandemic."

The Indian Ministry of Health recorded 4,092 deaths during the past 24 hours, bringing the total deaths to 242,362. The number of injuries increased by 403,738, which is close to the record peak, bringing the total since the start of the pandemic to 22.3 million.

In light of the acute shortage of oxygen and beds in many hospitals, and the capacity of morgues and crematoriums, experts say that the real numbers of injuries and deaths may be much higher than announced.

Aid is pouring into India from around the world in the form of cylinders, oxygen concentrators, ventilators and other medical supplies.

Globally, the number of people infected with the Corona virus at the global level exceeded 156.94 million, while the total number of deaths resulting from the virus reached three million, 410 thousand and 229 cases, according to a Reuters census.

The statistics showed that HIV infections were recorded in more than 210 countries and regions since the first cases were discovered in China in December 2019.

In Washington, the chief medical advisor to US President Joe Biden said, "There is no doubt" that the United States has reduced the number of actual deaths resulting from "Covid-19", which now stands at more than 581 thousand deaths.

Anthony Fauci, in statements to NBC, indicated that an analysis published by the University of Washington on May 6 found that the true toll is probably more than 900,000 people, "a little more than I thought."

For his part, White House Covid-19 Coordinator, Jeffrey Zentz, said that the United States is overcoming the most difficult stage in the Coronavirus pandemic, and that the country's health officials are now focusing on vaccinating more Americans.

"In my opinion, we are past the most difficult stage," Zentz added in an interview on CNN.

He stressed that the main task now is to continue increasing confidence in vaccines and vaccinating a sufficient number of Americans to curb the spread of the virus and its strains.

In Russia, the death toll from the new Corona virus, for the third consecutive day, increased by more than 8,000 new cases.

In Ramallah, the Palestinian Minister of Health, Mai Al-Keela, announced yesterday that seven deaths, 314 new cases of the Corona virus, and 810 recoveries were recorded during the last 24 hours.

• Fauchi: The United States has undoubtedly underestimated the actual death toll from Corona.