Tyrannosaurus rex is one of the most famous dinosaurs of all. The entire species became extinct when the earth was hit by a meteorite 66 million years ago. Now researchers have calculated how many T-rex in total have existed. 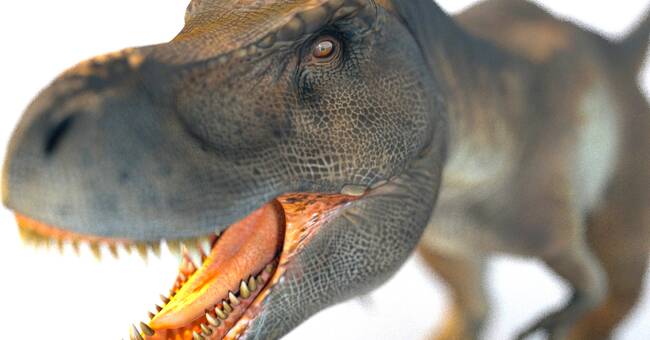 - When I hold a fossil from a Tyrannosaurus rex in my hand, I can not help but wonder how unlikely it really is that we found the fossil.

Is it one in a thousand, one in a million or one in a billion?

Then I realized that maybe we can actually figure out how many Tyrannosaurus rex there have ever been, says Charles Marshall who is a paleontologist at Berkeley University in California to Science.

The answer he came up with was that for every fossil of T-rex he finds, there are 80 million more fossils and the calculation is published in Science.

The calculation sheds new light on how difficult it is even for large species to fossilize.

It is required that the body be buried quickly enough and in the right chemical environment for it to become a fossil.

Relationship between density and weight

To calculate how many Tyrannosaurus rex lived on earth, Charles Marshall used a method used today on living animals to calculate in how large groups they live in. There is a strong connection between how many individuals there are. per square kilometer and how big the animals are.

- In one and the same area, there are few large animals such as elephants and giraffes, many medium-sized antelopes and extremely many small mice, says Charles Marshall.

He made an assessment of how much an adult T-rex weighed to get the animal's population density - that is, how close they lived.

And since only fossils of T-rex have been found in Canada and the western United States, he was able to calculate how many T-rex there should have been on that surface at one and the same time.

The result was that 20,000 T-rex should have lived at the same time.

- This is a mathematical exercise in a way.

But there is also a serious thought behind it.

It is shown that the margins of error are not greater for this extinct species than they are when you count the now living species, says Lars Werdelin, professor and paleontologist at the Swedish Museum of Natural History in Stockholm.

Play the clip and see how many people have ever lived on earth.

Since the video was made in 2013, another billion people have been born.