There are three key words behind President Xi’s call 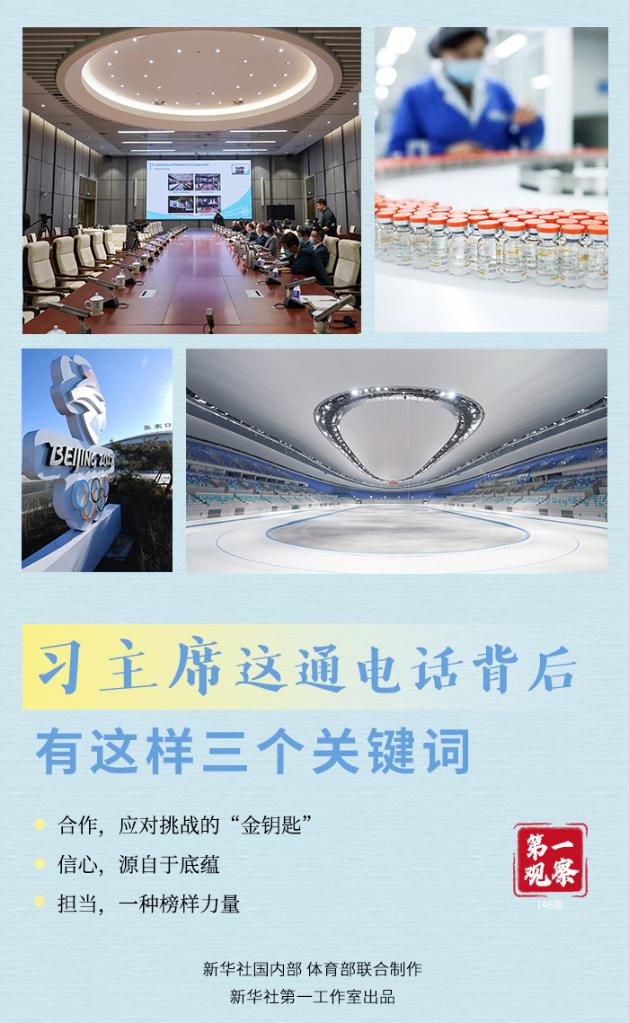 On May 7, the call between President Xi Jinping and the President of the International Olympic Committee Bach once again brought hot words such as "Olympic Movement" and "Winter Olympic Games" into people's vision.

This is the second call between President Xi Jinping and Bach this year. The previous call was in January.

In less than four months, many major events related to the Winter Olympics have occurred: Bach was successfully re-elected as President of the International Olympic Committee; the Chinese Olympic Committee Olympic athletes provide new crown vaccine; "Meet in Beijing" test event to hand in excellent answers...

In the past year, China and the world have been hit by the new crown pneumonia epidemic, and sports events such as the Olympic Games have also been greatly affected.

In the face of severe challenges, China and the International Olympic Committee have worked together to make progress in the preparations for the Beijing Winter Olympics and the Winter Paralympics, as well as the strengthening of vaccine cooperation.

On March 10, the 137th plenary meeting of the International Olympic Committee was held in the form of a video conference. The current IOC President Bach delivered a speech after his re-election.

Bach said that this motion has a "milestone" significance for ensuring the safe holding of the Tokyo Olympics and Paralympics. He said: "We are very grateful for the support of the Chinese Olympic Committee, which embodies the spirit of real Olympic solidarity and cooperation. ."

Cooperation is undoubtedly a "golden key" to cope with risks and challenges.

During this call, Xi Jinping stated that China is willing to strengthen vaccine cooperation with the International Olympic Committee to jointly build an effective barrier to protect athletes from participating safely.

After being re-elected as the President of the International Olympic Committee, Bach proposed that, in order to better respond to the post-epidemic era, it is recommended to add the word "Together" (meaning "together" after the Olympic motto "faster, higher, stronger" Hand in hand or together").

The cooperation with the International Olympic Committee on the new crown pneumonia vaccine is the epitome of China's extensive international exchanges and cooperation.

World peace and security, biodiversity protection, climate change, and the sustainable development of developing countries are all global issues that cannot be solved by any single country alone. In this context, global action , Global response and global cooperation have become necessary options.

"Knowing each other is not far or near, thousands of miles are still neighbors." The Beijing Winter Olympics will be the strong voice of the times that China and friends from all over the world hand in hand.

Xi Jinping emphasized that China has full confidence in the success of the Beijing Winter Olympics and Paralympics as scheduled.

Under the large space-time coordinates, the Beijing Winter Olympics has special significance.

The background of this grand event is the 100th anniversary of the founding of the Communist Party of China. China has achieved an all-round victory in poverty alleviation, has achieved major strategic results in building a well-off society in an all-round way, and has embarked on a new journey of comprehensively building a modern socialist country.

Since the successful bid for the 2015 Winter Olympics, General Secretary Xi Jinping has always been concerned about the progress of the preparations for the Winter Olympics.

On January 18 and 19 this year, Xi Jinping braved the severe cold to inspect the three major competition areas of Beijing, Yanqing and Zhangjiakou for two consecutive days, and hosted a briefing on the preparations for the Winter Olympics and the Winter Paralympics on the 20th.

It was the afternoon of January 18th. Xi Jinping had a cordial exchange with the stadium support staff, athletes, and coaches at the National Alpine Ski Center in Yanqing District, Beijing.

Such confidence comes from the background.

The preparations for the Winter Olympics are numerous, testing the overall strength of a country.

So far, the winter Olympics snow project and ice project test activities have been successfully completed, and the key elements involved in the competition have also been effectively tested.

In the second half of the year, the preparations for the Beijing Winter Olympics and Paralympics will lay a more solid foundation.

General Secretary Xi Jinping pointed out that the renovation and construction of the venues for the Beijing Winter Olympics and Paralympics incorporate many Chinese elements, reflecting our cultural self-confidence.

We must not only run a successful Winter Olympic Games, but also make it unique, exciting, and unique.

During the call, Bach said, “I believe that the Beijing Winter Olympics and the Paralympic Winter Games will show the world an example of fighting the epidemic”.

"Model power" is also an affirmation and praise of China's contribution to the international community.

At present, the most important task of the international community is still to fight the new crown pneumonia epidemic.

In the face of tremendous pressure on its own epidemic prevention and control, China has done its best to provide support to the international community, successively providing vaccine assistance to more than 80 developing countries, and exporting vaccines to more than 50 countries.

China has always had its own responsibilities.

This is the interior of the National Speed ​​Skating Stadium after the first ice making was taken on January 22, 2021.

In fact, during the preparations for the Beijing Winter Olympics, China's contribution to the Olympic movement has been gradually revealed.

The concept of green, shared, open, and clean running the Olympics is highly consistent with the Olympic reform ideas. The advanced technology demonstrated in the construction of the National Snowmobile and Sled Center and the "Ice Ribbon" venues is amazing. The old industrial zone of Shougang is transformed and the Yanqing competition zone is built. The environmental protection plan of "Mountain Forest Stadium" provides a fresh sample of the sustainable development concept of large-scale competitions.

These results are not only a process of China fulfilling its promises, continuous self-improvement, and rapid development, but also a process of providing Chinese solutions, Chinese wisdom, and China's contributions to the world.