The United Arab Emirates has expressed its deep concern about the violence in East Jerusalem, calling on Israel to reduce the escalation in the Al-Aqsa Mosque and the Sheikh Jarrah neighborhood, as clashes between the Israeli police and the Palestinians resulted in more than 220 wounded in a new toll, 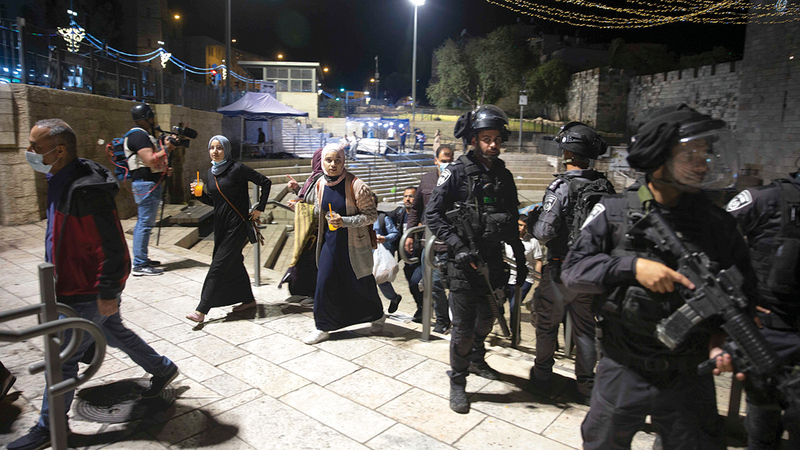 Palestinian women pass through a police cordon as they leave Bab al-Amoud to the Old City of Jerusalem, after clashes at the Al-Aqsa Mosque.

The United Arab Emirates has expressed its deep concern about the violence in East Jerusalem, calling on Israel to reduce the escalation in the Al-Aqsa Mosque and the Sheikh Jarrah neighborhood, as clashes between the Israeli police and the Palestinians resulted in more than 220 wounded in a new toll, in an escalation condemned by the United States and the European Union And regional countries calling for an end to it.

In detail, Minister of State Khalifa Shaheen Al-Marar confirmed that the United Arab Emirates expresses its grave concern about the violence in occupied East Jerusalem, and strongly condemns the storming of the Al-Aqsa Mosque and the displacement of Palestinian families from the Sheikh Jarrah neighborhood, which resulted in the injury of a number of civilians.

Shaheen indicated that the UAE strongly condemns and denounces the Israeli authorities' storming of the blessed Al-Aqsa Mosque, stressing the need for the Israeli authorities to assume their responsibility in accordance with the rules of international law to provide the necessary protection for Palestinian civilians and their right to practice religious rites, as well as to stop any practices that violate the sanctity of the blessed Al-Aqsa Mosque.

He also stressed the need to respect the sisterly Hashemite Kingdom of Jordan's role in caring for holy sites, in accordance with international law and the historical status quo, and not to prejudice the authority and powers of the management of the endowments of Jerusalem and the affairs of the blessed Al-Aqsa Mosque.

Shaheen called on the Israeli authorities to assume responsibility in reducing the escalation and ending all attacks and practices that lead to a continuing state of tension and tension. He also stressed the need to preserve the historical identity of occupied Jerusalem and calm and to exercise maximum restraint to avoid the region drifting to new levels of instability and threatening peace. .

In a statement, the Saudi Ministry of Foreign Affairs affirmed the kingdom’s rejection of “what was issued regarding Israeli plans and measures to evacuate Palestinian homes in Jerusalem and impose Israeli sovereignty over them.”

The statement stressed Riyadh’s condemnation of "any unilateral measures, any violations of international legitimacy decisions, and anything that might undermine the chances of resuming the peace process to achieve security and stability in the region."

Jordan condemned the Israeli "barbaric attack" in Jerusalem, calling on the international community to stop the "escalation and violations" committed by the Hebrew state.

A spokesman for the Jordanian Ministry of Foreign Affairs, Dhaifallah Al-Fayez, said in a statement that "the storming of the sanctuary and the attack on the peaceful worshipers is a flagrant and blatant violation and a barbaric, condemned and rejected behavior."

In Manama, the Bahraini Ministry of Foreign Affairs expressed its "strong condemnation of the Israeli forces' attack on worshipers at Al-Aqsa Mosque."

Manama called on the Israeli government to "stop these rejected provocations against the people of Jerusalem, and to work to prevent its forces from attacking the worshipers in this holy month."

Clashes between the Israeli police and the Palestinians in East Jerusalem on Friday night, Saturday, resulted in more than 220 injured, in a new toll.

The Israeli police used to combat riots rubber bullets and sound bombs in the face of the Palestinians, who threw stones, bottles and fireworks at the security forces around the first Qibla and the third of the Two Holy Mosques.

The Israeli police said that 17 officers were injured.

The Palestine Red Crescent said 205 Palestinians were injured in the violence in Al-Aqsa and throughout East Jerusalem.

In a video recording published by eyewitnesses, the Israeli forces stormed the large courtyard in front of the mosque and fired sound bombs inside the building, where crowds of worshipers, including women and children, were performing the prayers on the last Friday of Ramadan.

The United States said it was "very concerned" about what was happening.

"It is absolutely necessary for all parties to exercise restraint, and to refrain from provocative actions and statements," said a statement by the US State Department.

"We are very concerned about the possibility of expelling Palestinian families in the Sheikh Jarrah and Silwan neighborhoods in Jerusalem, especially since a number of them have lived in these homes for generations," the statement added.

It called on both sides to "avoid steps that exacerbate tensions," including evacuations in East Jerusalem and settlements.

The United Nations had earlier warned of forced evictions, saying that they might amount to "war crimes."

Yesterday, the European Union called on the authorities to act "urgently" to reduce tension in Jerusalem.

"Violence and incitement are unacceptable," an EU spokesman said in a statement, adding that "the European Union calls on the authorities to act urgently to reduce tension in Jerusalem."

He added, "Political and religious leaders and society of all sects must show restraint and responsibility, and do everything possible to calm this explosive situation."

In a tweet on "Twitter", the United Nations Special Coordinator for the Middle East Peace Process, Tor Vinesland, urged all parties to "respect the status quo of the holy sites in the Old City of Jerusalem for the sake of peace and stability."