There are still tons of molten radioactive mass deep in the “room 305/2” and in a clump called the Elephant Foot. The expert describes the phenomenon as glowing coal, although there is no danger to the environment so far. 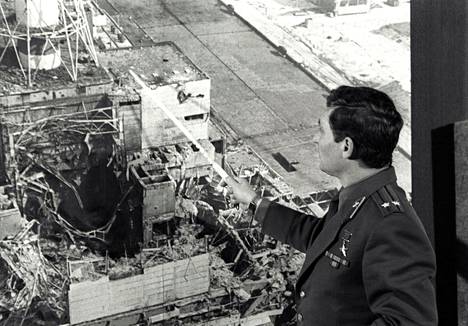 In the ruins of the Chernobyl nuclear power plant, which has exploded for almost exactly 35 years, there is still a fission reaction, says the prestigious Science magazine in a recent article.

According to the magazine, the measuring devices have registered slowly accelerating neutron radiation from deep under the concrete sarcophagus covering the reactor.

Neutrons flow deep in the ruins from a place called Room 305/2, which is inaccessible.

Neil Hyatt, a chemist specializing in nuclear materials interviewed by Science, describes the phenomenon as “the glowing charcoal of a grill”.

The phenomenon is known to the Finnish authorities.

The fission smokes under the destroyed reactor hall.

Deep below the sarcophagus covering the reactor is still molten uranium fuel from the power plant, zirconium used as the material for the fuel rod shell, graphite from the control rods, and a huge amount of sand used by rescuers to try to put out the reactor fire.

These ingredients have melted into a lava-like mass that flowed into the lower floors of the power plant.

The power plant ruins are still estimated to contain about 170 tons of uranium, 95 percent of the fuel from the quad reactor.

The “ivory foot” was formed when the molten fuel mixture flowed out of the high-pressure steam exhaust pipe of the reactor.

The uranium pellets inside the fuel rods begin to melt at a temperature of about 1,200 degrees. Image: INSP Digital Archive / Wikimedia Commons

According to Mettälä, the reason for the increase in neutron radiation is impossible to assess on the basis of available data.

These released neutrons can cause fissures in nearby uranium nuclei, where new neutrons are still released, Mettälä explains in an email.

Mettälä does not believe that a critical mass with a self-sustaining chain reaction has been created in matter.

- A chain of events is called subcritical amplification when the growth factor is less than one, i.e. the chain reaction is decreasing, as in this case it is very likely to be.

The amount of neutron radiation at the measurement points is affected by many environmental factors, of which the change in temperature and the change in the amount of water mentioned in the article alone can affect it in several ways, depending on the composition and geometry of the materials.

In addition to Room 305/2, there is a hardened “lava” containing nuclear fuel in a lump called Elephant Foot, among other things.

It arose from a molten mixture that flowed through pipelines into power plant structures.

The designation is due to the appearance of a lump a couple of meters wide.

The ivory leg was found after the accident.

The mass had glazed so hard that its surface had to be broken for sampling by shooting with an assault rifle.

The radioactivity of ivory has decreased over the years, but it is still dangerous to approach.

The structure of the substance has also changed: it is said to already resemble sand.

A commemoration of the Chernobyl accident was celebrated in Ukraine 35 years after the accident.

A photo of the cemetery of the deceased workers was taken on April 25, 2021. Photo: Celestino Arce Lavin / ZUMA / MVPhotos

Researchers have long known that the development of a self-sustaining fission reaction under a sarcophagus is a risk.

"There are a lot of uncertainties," said Maxim Savelyev, an expert at the ISPNPP Institute for Nuclear Safety in Kiev, according to Science.

- We cannot rule out the possibility of an accident, Savelev said.

However, according to measurements by the Ukrainian authorities, neutron radiation is accelerating only slowly.

According to Saveljev, this means that the power plant safety authorities still have several years to think about countermeasures to the phenomenon.

One possibility is to use a robot to drill holes in the mass and inject boron, which curbs the chain reaction.

Mettälä is on the same lines.

- In the light of the current situation, continuing to monitor the situation is a sufficient measure.

However, if the situation worsens, the addition of a neutron absorbing agent would probably be the first steps to be tried.

Mettälä is confident that the flow of information from Ukraine will work if the situation changes.

- According to current information, there is no danger to the environment.

The local authority is responsible for monitoring the incidents and, if necessary, they will communicate their findings and actions.

The acceleration of the risk of fission was thought to have disappeared after a new, massive concrete structure was completed in 2016 on top of the original sarcophagus covering the destroyed power plant.

The deck, which cost 1.5 billion euros, blocked the leakage of rainwater inside the reactor ruins.

Rainwater passing through the old sarcophagus slowed the movement of neutrons and, according to Science, increased the risk of neutrons hitting the nuclei of fuel uranium atoms, splitting them, and maintaining a chain reaction.

After the rainwater leak ends, scientists are puzzled by the reasons for the phenomenon.

One possible explanation, according to Science, is the drying of the radioactive mass after the surface of the water in the ruins began to fall after the completion of the new sarcophagus.

Based on mathematical modeling by the Ukrainian Institute of Nuclear Safety, it could be possible that drying would cause the neutrons to “bounce” in the mass and thus promote a fission reaction.

However, the mechanism is unknown.

The earthquake and the ensuing tsunami led to a nuclear accident at the Fukushima Daiichi nuclear power plant in March 2011. An aerial photograph of the demolition and rehabilitation of the power plant area was taken in February 2021. Photo: AFP / Lehtikuva

A study in Chernobyl on the behavior of molten, fuel-containing mass is of interest to the Japanese authorities, who are patching up the traces of the Fukushima nuclear accident.

A large amount of nuclear fuel melted at the Fukushima Turma in March 2011. The Japanese are said to be following exactly what technical solutions are being devised at Chernobyl to combat the possible acceleration of fission.

Ukraine has long planned to dismantle the old reactor sarcophagus from under the new one and remove the molten material.

The already cumbersome and dangerous operation seems to have become even more difficult after the fission observations.

In April, the Japanese authorities authorized the power company to discharge about 1.3 million tons of radioactive water into the Pacific Ocean, which was used to cool the reactors after the accident.

The decision has provoked strong criticism.