Republican John Boehner admits that House Speaker Nancy Pelosi is the most powerful speaker of the House of Representatives in American history, as Pelosi supported former President George W. Bush with the votes he needed to prevent a depression as Republicans turned away from him. I helped former President Barak 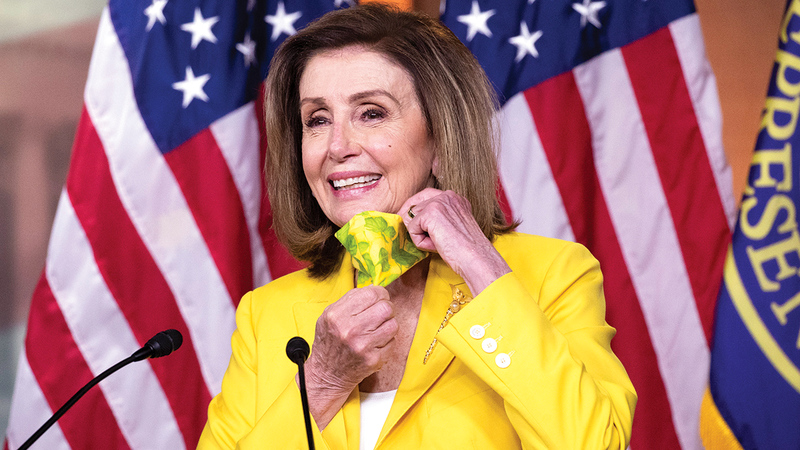 During her long career in the House of Representatives

Republican John Boehner admits that House Speaker Nancy Pelosi is the most powerful speaker of the House of Representatives in American history, as Pelosi supported former President George W. Bush with the votes he needed to prevent a depression as Republicans turned away from him.

Yet it has repeatedly underestimated former President Donald Trump, withstood this year’s supporters ’invasion of the Capitol, and helped pass Joe Biden’s COVID-19 relief through Congress.

Her hand represents an "iron fist" wrapped in "a Gucci glove," in the words of USA Today's Washington bureau chief, Susan Page.

Page penned Pelosi's latest biography on her course from Baltimore to Washington, DC.

Geographically, Pelosi's rise was neither sluggish nor meteoric, but rather calm and smooth.

Page provides a worthwhile and documented reading on Pelosi, and she was interviewed in this regard along with quotes from Pelosi's friends and foes, with both Bush's chief of staff, Andy Card, and former House Speaker Newt Gingrich - reluctantly - praising Pelosi from San Francisco.

In the same spirit, Steve Bannon, the White House adviser who entered prison and issued a pardon by Trump, described Pelosi as a "murderer."

Not just a job

Pelosi believes that presiding over the House of Representatives is not just a job in and of itself, she has been passionate about it throughout her career, but she definitely loved the role, and most importantly, perfected it.

I understood that nobody relinquished power as soon as they were asked to do so.

Instead it should be taken from him well-deserved.

Pelosi took over the male-dominated job, and she succeeded.

Ask the second Democratic member in the hierarchy in the House of Representatives, Steny Heuer, who follows her in line, as fate wanted them to work together in the same office, and for the same director since their youth.

Pelosi is liberal albeit pragmatic.

When she was a first-year congressional candidate, Pelosi rose from a solid foundation.

She chaired the California Democratic Party and the Finance Committee for a Campaign for Senate Democrats.

I specialized in internal affairs.

When a special election was held in the spring of 1987, Pelosi reached out to the Republicans of the San Francisco Bay Area, who provided her with a margin of victory.

Once in Congress, Pelosi became a ranking Democrat on the House Intelligence Committee and later rose to join the party leadership team.

The party used her fundraising skills and attention to detail.

Pelosi has also befriended extraordinary figures in the Democratic Party, and Page has documented her friendship with the late Congressman from West Pennsylvania John Murtha, a former Marine.

Murtha provided Pelosi with "ammunition and cover" in her opposition to the Iraq war, and helped her rise to become speaker of the House of Representatives.

After losing Murtha to Hoyer in an in-party competition in 2006, Pennsylvania announced his retirement.

Page revealed that Murtha described Pelosi as "more liberal than I am, but she has the power to get things done and has rendered a tremendous service to Congress and our country."

In another comment, he said that she "can always come up with a workable solution."

Page documents Pelosi's ability to judge talent, as she revealed the political brilliance of current House Intelligence Committee Chairman Adam Schiff, when he was in his early term in the House, but she had a dim view of the head of the Congressional Judiciary Committee, Jerrold Nadler.

Later, Schiff, a former federal prosecutor, snatched his seat in California from Republican James Rogan. Nadler could not control his own commission. After a tumultuous hearing in September 2019, it was Schiff, not Nadler, who was leading the way in Trump's first impeachment trial. Seniority and tradition slipped to take a back seat, leaving room for efficiency.

Pelosi had a fraught relationship with Bush, but it curbed Democratic moves to isolate him on Iraq, a move Trump has already praised.

The trial saw Bill Clinton, and concluded that the harsh political judgments were best left to voters.

The dismissal was not a normal policy for her, or another political tool, but Trump was a different matter for her, for more than two years Pelosi had resisted the impeachment efforts demanded by the rioters in her party, but she finally joined them when Trump's games in Ukraine became public, when he froze the aid. Russia’s besieged neighbor, in an attempt to pressure Ukraine to investigate Joe and Hunter Biden.

Trump has turned personal matters into political and vice versa.

Pelosi had a strong memory and hid her anger for a while, and after Biden won the election, Pelosi described Trump as "a fool and a fool."

As the mother of five and grandmother of nine, she knew troubled children well.

Despite all of this, Pelosi sometimes does not read the future well. She predicted the victory of former Democratic presidential candidate Hillary Clinton in 2016 and the victory of the Democrats in the polls four years later.

Instead, Clinton watched Biden’s presidency from afar, the Senate remained divided 50-50, and Pelosi's margin in the House of Representatives fell to a handful of votes.

But to her credit, she quickly understood that Trump was a potential tyrant, and his respect for the election results was purely circumstantial, as he kept saying: I will win .. I will win.

Hours after the Capitol revolt at 3:42 am on January 7, 2021, the challenges were over, Biden was confirmed, and Pelosi sent a letter addressing the insurgents: "To those who sought to deter us from our responsibility ... You have failed."

• Once in Congress, Pelosi became a leading Democrat on the House Intelligence Committee, and later rose to join the party's leadership team.

The party used her fundraising skills and attention to detail.

• Pelosi's relationship was fraught with Bush, but it curbed Democratic moves to isolate him on Iraq, a move Trump has already praised.

The trial saw Bill Clinton, and concluded that the harsh political judgments were best left to voters.

Pelosi sometimes does not read the future well. She expected former Democratic presidential candidate Hillary Clinton to win in 2016 and Democrats win the ballot after four years. Instead, Clinton watched Biden’s presidency from afar, and the Senate remained divided 50-50, dropping. Pelosi's margin in the House to a handful of votes.