China News Service, Beijing, May 9th (Reporter Li Chun) The offline experimental art interactive activity "500 Pens + Commitment to Quit Smoking" sponsored by the World Health Organization Representative Office in China and the Chinese Center for Disease Control and Prevention, and co-organized by the Central Academy of Fine Arts 9 Day was held in Beijing. The event invited the Chinese contempor 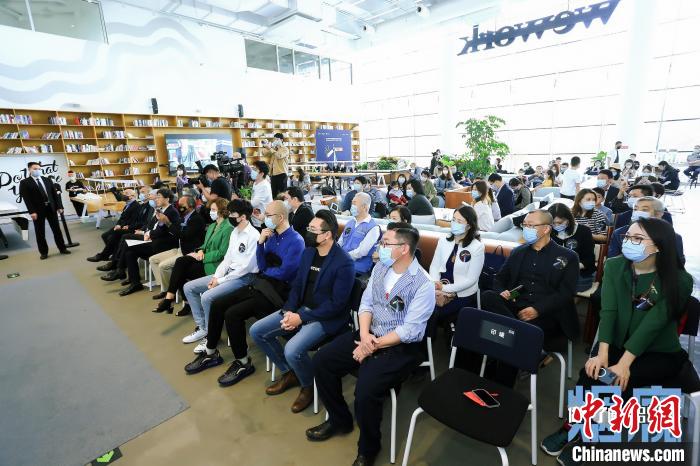 China News Service, Beijing, May 9th (Reporter Li Chun) The offline experimental art interactive activity "500 Pens + Commitment to Quit Smoking" sponsored by the World Health Organization Representative Office in China and the Chinese Center for Disease Control and Prevention, and co-organized by the Central Academy of Fine Arts 9 Day was held in Beijing.

"Five Hundred Pens" is one of Wu Jian'an's most concerned artistic creation series in recent years, and has been implemented many times at home and abroad.

Hundreds of strokes painted by hundreds of people will be cut, collaged, and recreated by Wu Jian'an and his team, and finally form a work of art of "500 Pens + Commitment to Quit Smoking", combining hundreds of quit smoking promises into one The public's call for smoke-free and healthy.

The final work will be officially announced on World No Tobacco Day on May 31 this year.

Academician Gao Fu, director of the Chinese Center for Disease Control and Prevention, delivered a speech at the event.

At the event on the 9th, hundreds of people from all walks of life, including Gao Fu, Director of the China Centers for Disease Control and Prevention, Chang Qide, United Nations Coordinator in China, and young actor/singer Xu Weizhou, participated in the artistic creation. Make a commitment to quit smoking.

According to the latest WHO report data, tobacco use causes 8 million people to lose their lives globally every year.

Globally, there are approximately 1.337 billion tobacco users among people aged 15 and over.

The number of smokers in China reached 308 million.

Siddharth Chatterjee, United Nations Coordinator in China, delivered a speech at the event.

In a video speech sent to the day's event, Gao Li, the representative of the World Health Organization in China, pointed out that tobacco control is about saving lives.

Dr Gauden Galea, the representative of the World Health Organization in China, delivered a video speech.

It is hoped that the blessing of art can help us bring relevant smoking cessation information to hundreds of millions of smokers, and mobilize more smokers to make cessation commitments.

"Every one of us will form a joint force to create and realize a common vision-a smoke-free future, a healthy future."

Wu Jian'an, a professor at the School of Experimental Art of the Central Academy of Fine Arts and contemporary visual artist, explained the creation mode of "Five Hundred Pens".

Art transcends culture, race, religion, and region. Whether it is poetry, painting, music, or literature, different art forms can be understood by people.

Among the 17 sustainable development goals proposed by the United Nations, the third goal is to "ensure a healthy lifestyle and promote the well-being of people of all ages."

Chang Qide pointed out that one of the main obstacles to achieving this goal is tobacco use, which not only causes 8 million people to lose their lives in the world every year, but the economic loss caused by global tobacco consumption is as high as 1.4 trillion US dollars every year.

"Today is Mother's Day, which also gives us an opportunity to re-emphasize our commitment to tobacco control."

Gao Fu pointed out that China is comprehensively advancing the Healthy China Action, the fourth of which is the "Tobacco Control Action."

To do a good job in tobacco control, it is very important to promote science.

Gao Fu said that as of May 1 this year, more than 30 places in China including Beijing, Shanghai, Shenzhen, Xi'an, Lanzhou, Wuhan, Qingdao, Qinhuangdao and Zhangjiakou have promoted smoke-free environmental legislation, benefiting 14% of the people.

On the whole, China has done a lot of work on smoke-free environmental legislation in recent years and has achieved results.

Tobacco control requires everyone to act together, first of all to protect themselves, but also to fulfill a social responsibility.

The children participating in the activity are painting.

For Wu Jian'an, this creative project has extraordinary significance.

The interactive form of experimental art, a strong sense of participation and ritual, transform the intangible commitment and support for quitting smoking into action, which is tangibly presented in works of art.

Talking about the final appearance of the work, Wu Jian'an expected that "it is a huge and balanced picture formed by everyone" and an "abstract group image."

Regarding the help this "group portrait" will bring to the tobacco control action, Wu Jian'an said that everyone joining in and sharing the smoking cessation story has become an integral part of the work.

What art creation ultimately presents is a kind of group energy, "People may be more willing to share, telling everyone that he participated in such a "Farewell to Tobacco Addiction" activity. This social influence will be very special."