After the clashes on the night of the 27th of Ramadan ... the occupation quells the worshipers in the Al-Aqsa Mosque after the dawn prayers

The occupation forces cracked down on dozens of worshipers at the Lions Gate as they left the Al-Aqsa Mosque after performing the Fajr prayer and reviving the night of the 27th of Ramadan, in an extension of violent confrontations that took place in the vicinity of Al-Quds Al-Sharif last night. 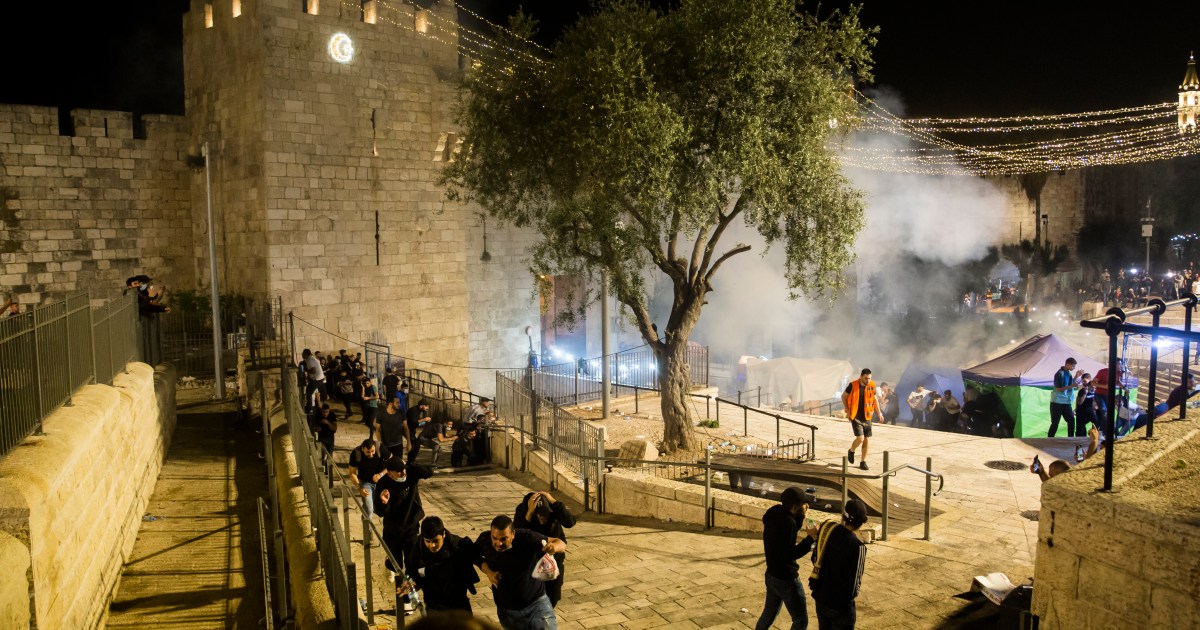 The occupation forces cracked down on dozens of worshipers at the Lions Gate as they left the Al-Aqsa Mosque after performing the Fajr prayer, in an extension of violent confrontations that took place in the vicinity of Holy Jerusalem on the night of the 27th of Ramadan.

Tens of thousands of worshipers performed the Fajr prayer, and then thousands of them gathered near the Al-Qibli prayer hall, and chanted slogans denouncing the occupation.

The confrontations began at the Lions Gate and spread to the courtyards of Al-Aqsa Mosque, where Israeli soldiers fired rubber bullets, tear gas and sound bombs, and stormed in large numbers the Al-Aqsa Square.

The Anadolu Agency quoted the Palestine Red Crescent Society as saying that 10 Palestinians were injured at dawn on Sunday, during clashes between Palestinian youths and the occupation forces in Al-Aqsa Mosque, in the center of occupied Jerusalem, bringing the number of injuries to 100.

The association indicated that an injured woman was taken to hospital after being hit by a rubber bullet in the mouth.

And early Sunday, the Palestine Red Crescent Society announced that the number of injured rose to 90 during violent confrontations in the vicinity of Jerusalem, and that 30 of them were taken to hospitals.

The Red Crescent Society said that among the injured were a one-year-old baby, as well as 5 other children, and a medic.

The society stated that most of the injuries with rubber bullets and stun grenades were direct, and there was an attack.

More than 90,000 Palestinians participated in the Tarawih prayers at the Al-Aqsa Mosque, despite the strict restrictions imposed by the occupation in recent days, to limit the movement of Palestinians inside the Old City, while the occupation forces targeted demonstrators in the West Bank and Gaza Strip.

The Islamic Endowments Department said that worshipers "celebrate the Night of Power at the Blessed Al-Aqsa Mosque despite the difficult occupation measures, and many worshipers were prevented from arriving, and the residents of the West Bank were closed."

The preacher of Al-Aqsa Mosque, Sheikh Ikrimah Sabri, said - in a statement to Al-Jazeera - that the occupation wants to empty the Temple Mount to allow the incursions of extremist Jews, adding, "We remain in Jerusalem, and we will not accept any harm to the sanctities of the Holy Mosque."

The occupation forces had pursued Palestinian youths who had gathered in the Sheikh Jarrah neighborhood in Jerusalem, and stormed a house in the neighborhood where some young men had taken refuge during hit-and-run operations.

And the occupation forces prevented approaching the houses threatened with eviction in the Sheikh Jarrah neighborhood, as well as the Palestinian solidarity movements with the residents of the neighborhood.

The occupation soldiers fired tear gas and stun grenades at Bab Al-Sahira and Salah El-Din Street near the walls of the Old City.

Clashes took place between the occupation soldiers and Palestinian youths near the separation wall in the village of Budrus, west of Ramallah, near the town of Beita, the Hawara checkpoint south of Nablus, the Jalameh checkpoint north-east of Jenin, and the Qalandia military checkpoint north of Jerusalem.

On the other hand, the Al-Jazeera correspondent said early in the morning, Sunday, that the artillery of the occupation army targeted two shells, an observatory for the Palestinian resistance east of Deir Al-Balah, in the central Gaza Strip.

The Israeli army said that it had carried out a raid on a military site of the Islamic Resistance Movement (Hamas) in the southern Gaza Strip, after a rocket was fired from it that landed in an open area.

Yesterday, Saturday evening, the occupation forces threw tear gas bombs near the border strip in the eastern Gaza Strip on Palestinian demonstrators who responded to calls to protest against the Israeli attacks in Jerusalem and Al-Aqsa Mosque, and Anadolu Agency stated that the targeting resulted in a number of demonstrators suffocating and providing medical assistance in the field.