The spirit of Ant Island on the coast of the East China Sea: guarding an island’s past and present lives

China News Service, Zhoushan, May 8 (Reporter Li Dian) "Start a business hard, dare to gnaw at the bones, and strive for first-class." Walking down the ferry from Shenjiamen in Zhoushan, Zhejiang to Ant Island, you can see this at a glance. 12 words.   The Ant Island with a land area of ​​less than 3 square kilometers, as the name suggests, is like a small ant floating in the East China Sea. An 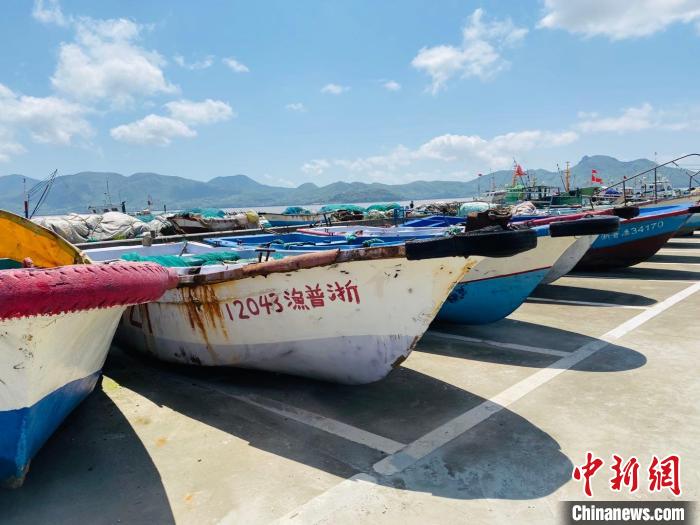 China News Service, Zhoushan, May 8 (Reporter Li Dian) "Start a business hard, dare to gnaw at the bones, and strive for first-class." Walking down the ferry from Shenjiamen in Zhoushan, Zhejiang to Ant Island, you can see this at a glance. 12 words.

The Ant Island with a land area of ​​less than 3 square kilometers, as the name suggests, is like a small ant floating in the East China Sea.

And it is this "East China Sea Little Ant" who actively seeks change and cooperates with each other, which has become an advanced model of the national fishing area.

Looking back at the past and present of this island, from experiencing the blue wisps and self-reliance of production and self-rescue, to the efforts of all people on the island to remove the famous "Lead Head Mountain" hat, to the creation of advanced villages and towns in the "National Work of Creating Civilized Villages and Towns"... The condensed 12-character Ant Island spirit is the spiritual pillar in the hearts of several generations of Ant Island, and it is also the most vivid and true development portrayal of Ant Island.

Living on such a mini-island, people can only "eat the sea by the sea".

Together with the waves and with the boats, here, almost every household will stage several stories about riding the wind and breaking the waves.

Recalling the hardships of the fishermen in the early days of liberation, Jiang, an old fisherman who was more than 80 years old this year, replied with a bit of excitement. The scenes of the past can be vividly remembered: when he goes out to sea, he will wander for irregular days, often face lack of fresh water, and rely on simple wooden boats to fight against the sea. Dou Yong... "The conditions at that time were really bitter, but in order to support the family, there was no way!"

The difficult environment and hard life made Ant Island famous for being “poor”, but it did not overwhelm the people here. Instead, it gave it the perseverance of hard work and self-reliance.

If the fishery wants to develop, it must first build ships.

In the early 1950s, in order to raise enough money to buy boats, more than 200 women from Ant Island rubbed 120,000 catties of straw ropes and bought "straw rope boats" in exchange for money.

Time flies, Jiang Huixin has changed from a fisherman to the boss of the boat, provoking the burden of a family, and at the same time witnessing the development of the fishing industry in Ant Island: the small wooden boat is replaced by a motor sailing boat, and fishing has gone from offshore to distant ocean...

It is the hard work and hard work of the women and fishermen of Ant Island that make this small island, which was once poor and white, become an advanced model of the national fishing area.

This kind of tenacity has been passed down from generation to generation and has long been immersed in the bones of Ant Island people.

Love: One heart is for the green of the island

This is due to the fact that in the 1960s, Ant Island responded to the “greening the motherland’s call” and vigorously closed the mountains for afforestation. Only half a month a year was allowed to go up the mountains to cut firewood, and the protection of mountains and forests was included in the township regulations and the implementation of unified Management, unified planning, unified planting, unified rectification, unified logging, unified economic accounting.

"My father did one thing all his life, and that was planting trees." Speaking of his late father Sheng Zaitang, the Ant Island forest team leader Sheng Chengfen couldn't hide his admiration. "The nearly 3,000 camphor trees in this forest are him. It was cultivated and planted with the villagers."

"The most impressive thing when I was a child was that every day before dawn, my father set out to plant trees and waited until dark before coming back. His body was covered with dirt." Sheng Chengfen recalled, in order to find a suitable tree species, he served as the head of the forest farm in Ant Island Township. His father kept groping and finally chose to plant tung tree and camphor on the mountain.

The green road on the island is not easy.

In order to better plant trees and afforestation, Sheng Zaitang and local cadres relied on the tenacity of "ant gnawing bones" to persuade the villagers to move their graves to the nearby uninhabited island.

From then on, the living settled in Big Ant Island, and the dead settled in Small Ant Island. This has become an agreement shared by the villagers of Ant Island.

Inspired by his father to plant trees throughout his life, Sheng Chengfen also chose to protect the forest on the island.

"The woods for which my father gave his whole life are now an important part of the Ant Island Red Education Base." Sheng Chengfen said that she wanted to use her hands to leave more green for Ant Island like her father.

Nowadays, the ecologically hard Ant Island has been "gnawed", and it is committed to the construction of a tourist ecological island.

The island’s forest coverage rate has reached 70%, the green area has grown to 1,760 mu, and there are as many as 300 species of plants for garden greening, making it a veritable ecological green island.

Collecting all the small forces and working hard together can make great things.

The Ant Island people who came from the difficult situation all reflected the Ant Island spirit of "working hard, daring to gnaw the bones, and striving for first-class".

How can we carry forward this spirit?

In order to better tell the story of Ant Island, in 2018, as an important position to promote and inherit the red spirit of Ant Island, the Ant Island Spirit Red Education Base was officially opened.

Ding Heye, who had served as the director of the women of Ant Island, also changed his identity: the captain of the storytelling team of the Ant Island Spirit Red Education Base.

From rubbing grass ropes to selling fire chimneys to raise funds to build ships, to building the "March 8 Sea Pond" without fear of hardship, she was busy telling stories about the hard work of the women in Ant Island to the people who came to the base to study and inspect.

"The spirit of Ant Island is not only not outdated, but it must continue to be carried forward." Gu Bosheng, member of the Party Working Committee and Deputy Director of the Ant Island Management Committee, told reporters that in recent years, the local government has adopted more methods such as digging content, branding, building facilities, and promoting projects. Take measures to promote the construction of the red education base, so that the spirit of Ant Island can be refreshed in the new era.

Telling the story of Ant Island Photo by Li Dian

"In the past few years, there has been an endless stream of tourists visiting and studying on the island, which directly drove the business of our restaurants." Zou Jiye, who was once a member of the mountain quarrying team during the construction of the March Eighth Seawall, used his own small courtyard to set up At Yujiale, from the beginning of going alone to starting a business with the fishermen-in-law, the business is getting more and more prosperous.

In 2019, version 2.0 of the Ant Island Spiritual Red Education Base was launched, and the supporting services for red tourism were also increased.

Yan Yueqin, the operator of the Aegean Hotel opposite the Ant Island Wharf, is the first batch of merchants to join the "mutual assistance and promotion group" of Yujia Homestay.

Yan Yueqin introduced that the bedding and toiletries used by the hotels and homestays that join this group refer to relevant standards so that travelers can have a better play experience.

During the "May 1st" holiday, Zhang Bo and his family who lived in Hangzhou made a special trip to Ant Island for tourism.

"Children living in a prosperous and comfortable environment need to know the valuable Ant Island spirit and inspire themselves to grow in adversity." After visiting the Ant Island Spirit Red Education Base, Zhang Bo said with emotion.

The arduous entrepreneurship in the blue ocean, the green miracle that has been "gnawed", the inheritance and development of the red spirit... Now, standing at another historical node, I once again look back at Ant Island’s road of forging ahead. Under the guidance of the Ant Island spirit, this The "little ant" sitting on the East China Sea is already ready to set sail and wants to set sail again.