Tauski, 58, woke up to alarming symptoms - made a radical life change and is now a changed man: went on a beauty operation in Turkey and lost 25 pounds

According to the doctor, Tauski was a ticking time bomb that could only be unloaded by losing weight. 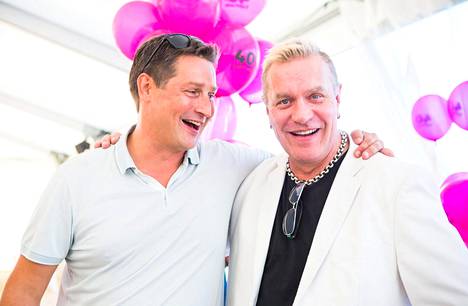 Both physically and mentally.

Weekly visits to therapy accelerate internal change, and externally, the singer has rehabilitated herself with hair transplant surgery and losing 25 pounds.

- I couldn't drive a car in the middle of the day for a while before I had to rest.

The situation got so bad that I was in the hospital for three days for examinations, Tauski Peltonen says.

- There is a break in the left side of the heart that is not harmful except when it starts to react to bad lifestyles.

I was given medications for heart, blood pressure and cholesterol.

The drugs did not fit but should have been switched to other drugs.

- I threw them in the trash and started to lose weight.

The doctor had said I was a bit like a ticking time bomb that should get my stomach off, Peltonen adds.

He has fair advice for middle-aged men.

- More is invested in the maintenance of that beloved car than in itself.

The car could sometimes take a little cheaper maintenance and service itself.

In his own right, Tauski has taken action.

- The two biggest problems of an aging man are stomach upset and baldness.

They make you look older than you are.

In his fifties, Peltonen woke up to gaining pounds.

- I've always been a guy about a hundred pounds.

Now the weight rose to a maximum of 117 pounds.

I could cover my stomach with clothes, but there it was.

- I belong to the generation that was born in the mouth of a meetvurst.

I still taste, but you can enjoy different things.

You don’t have to give up good food even if you lose weight.

Tauski in an interview with Pertti Salovaara in April 2014.Photo: Tomi Glad

Tauski did not follow any particular diet but built his daily meal of foods he liked.

That way, it’s easy to stay on track.

Mornings begin and evenings end with a smoothie made from lean curd and pineapple.

Chicken and fish with vegetables are going at a steady pace to ensure protein and fiber intake.

- I went for monthly blood tests to look at vitamins and other values.

The gig trips came with sausages and meat pies pulled earlier at night that lacked any nutrients.

Tauski knows how important water is in weight management.

- I always have water bottles in the car.

Remove all sugar hoses and water in place.

Tauski sometimes gives himself his former delicacies as well.

Once a month, he goes to a burger or pulls a bar of chocolate, but it stays there and doesn’t get out of hand.

The balance of weight management helps with balance.

- Some professionals say that I shouldn't weigh myself all the time, but I have to look at the meter readings in the morning and in the evening.

In addition to scales, the results quickly began to show in blood pressure measurements and other studies.

- I suffered from baldness.

Because I’m tall, many didn’t even notice, but hair thinning itself started to bother me in my forties.

Peltonen praises the Turkish clinic, but admits that the anesthesia of the scalp associated with the multi-hour surgery was very painful.

- But the pain lasts only a moment and is worth it.

Which one produces more pain: if you suffer from your appearance all the time or experience a moment of pain, Tauski asks.

- The first injections made me scream, but when the anesthesia started, I felt relieved in minutes.

Yes its a pain to endure, it wasn’t that bad.

3,400 hairs were transferred from the neck to the head.

The surgery was successful and now, after just over a year, the area of ​​the transplanted hair is no longer, in Tausk's opinion, different from other hair.

- It was said in advance that a year from now I will have full hair and that is what happened.

Follow-up was good, once a month the clinic had to have a picture of the growing hair.

I was advised to take a head massage because hair growth could have been even faster than I had.

Peltonen plans to return to the clinic to have his eyes and maybe his teeth cut.

- I don't see the little text, but I don't like wearing glasses.

Peltonen has stopped using fillers for the face because the effect of the substances lasts only a few months.

- The grooves do not interfere, they can show age as well as graying hair.

Tobacco smoking has remained and alcohol use has almost declined.

- I always say I haven't finished anything.

On a holiday, I might smoke a cigar and take alcohol once a year.

- This is now a permanent way of life: play sports, sleep, do not drink liquor or smoke tobacco.

Anyone can do this basic set if they want to.

These give you mental well-being that affects everything, Peltonen encourages.

Yes, they noticed how bad I can be, Tauski knows.

- Therapies usually don't help me, but now I have also gone to therapy once a week to unravel difficult things.

It’s still just one of the things that makes me feel better now than ever, Tauski explains.