When Cristina Casplin and her partner Ulf Jonsson stepped out on the terrace, they had to rub their eyes. Far out on the ice of Furufjärden between Luleå and Råneå sat a large flock of sea eagles. 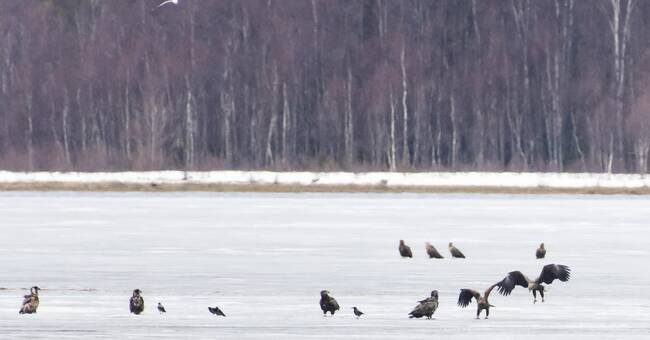 Cristina Casplin and her partner Ulf Jonsson live beautifully in Gussö, which is located by Furufjärden.

The couple has a great interest in birds and also usually visits many different places to look for birds.

Among other things, they have traveled about 600 km up to Andöya in northern Norway to see sea eagles.

- At most we have seen eight there at the same time, says Ulf Jonsson.

"My God, what an experience"

This time they did not have to ride a meter.

When they stepped out on the terrace in the house, Ulf Jonsson could see several black dots out on the ice.

At first he thought it was an angler, but when he picked up the binoculars he saw that it was a flock of sea eagles that had settled down.

One by one joined and in the end there were twelve eagles there at the same time, which is highly unusual.

- My God, what an experience, Christina exclaims.

Most were young eagles.

- We thought that they must have gathered a bunch of young boys who pull the coast up together.

It was fantastic to see, she continues.

Had to pick up the cameras again

Ulf agrees with his partner:

- Yes, it sat all day. We then took a round with the car to take pictures of some other birds and just when we came back and were to unload from the car, someone came from the lake who sat in the highest narrow spruce top so it was just to pick up the cameras again.