The Rauma siblings hope that their seriously ill father will still have time to experience Luko's championship. 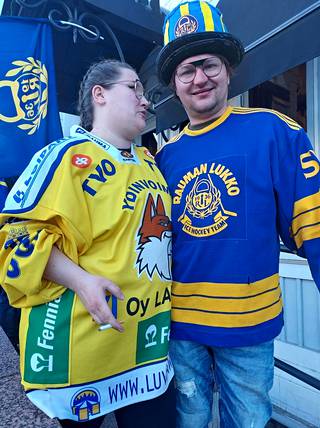 Sometimes it can feel like the sport is bigger than life itself.

Saturday was a huge day in Rauma.

The pulsating heart of the city, the Hockey Championship League team Lock, won the first final match in more than 33 years, and the first ever in his hometown.

The victory brought tremendous feelings of joy to the surface.

And we certainly weren't the only ones in Rauma, Hannonen said.

- We have a rather emotional situation now anyway.

Our father is the biggest Lukko fan in our family, and he is currently fighting for his life at Rauma Hospital.

We went over the weekend to take Dad with all sorts of Lock props to get him into some sort of finale mood, he continued.

Viitasalo said their father was in a virtually unknown state.

- But he has reacted to Lukko.

That's the only thing he reacts to.

This success of Luko is something that brings even a little comfort to our lives at the moment, Viitasalo said.

- We agreed with the nurses that we could take Lukko's stuff to Dad.

It is somehow positive to think that even if Dad gets strength from Luko's success, Hannonen added.

Salla Viitasalo and Antti Hannonen hope that their father will still have time to experience Luko's championship. Photo: Harri Pirinen

According to the siblings, their father has been a Lukko fan since he was little.

This was hospitalized two weeks ago.

It’s not about the corona, they emphasize.

- He's been in a really bad condition in the hospital for two weeks, and we don't know how this is going.

On Saturday, I went to see my father before the game and put on Radio Ramona to listen to Luko's game, Viitasalo says.

- It is also not known exactly what his brain function is.

Today I went to her in these Locker clothes and asked if you know me.

At this point, the words of all present are stuck in the throat.

It only takes a couple of days.

- I hope so, Viitasalo says, his voice trembling.

The championship of the lock would most obviously be the father’s most earnest wish.