The coronary situation has become serious in recent weeks, not only in India but also in several of its neighboring countries, as well as on the Southeast Asian side. 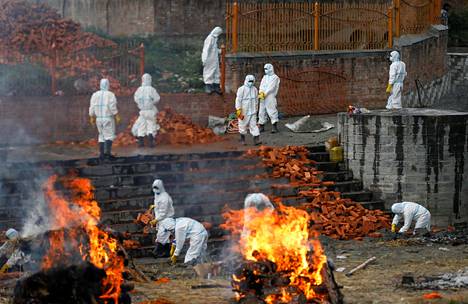 The curve of daily coronavirus infections in India seems to be slowly turning downwards, but the situation in the country remains very difficult.

On Saturday, a record 4,187 deaths per day were recorded in India, and the number of new infections also remained in more than 400,000 cases.

The corona situation in India has been widely reported around the world in recent weeks.

Less attention has been paid to the fact that the situation has deteriorated sharply in recent weeks, also in India's neighboring countries and also in South-East Asia.

The issue has recently received attention from CNN, NPR, the South China Morning Post and the Financial Times, among others.

This is what the current corona situation in six regions looks like:

In Nepal, with a population of 29 million, the disease situation has progressed in much the same way as in its southern neighbor, India.

In proportion to the population, the number of infections in the country is now at about the same level as in India a couple of weeks ago

On Friday, a record of daily infections was recorded in the country so far, when a total of 9,023 people received a positive result from the corona test.

A week ago, positive results accounted for 44 percent of the corona tests performed, suggesting that a large number of infections remain out of the registries.

“What is happening right now in India is a horrific foreshadowing of the future of Nepal if we are unable to quell this latest tidal wave that is taking minute by minute more lives,” Nepra Red Cross leader Netra Prasad Timsina said in a statement.

Images of tombstones have recently spread to the world not only from India but also from Nepal.

Like India, the majority of the population in Nepal is Hindu by religion, whose ways include cremation at the rovi. Image: NAVESH CHITRAKAR / Reuters

In Nepal, the number of infections started to rise sharply in mid-April.

Prior to that, daily coronary infections in the country were counted in a few hundred more.

The aggravation of the situation has been attributed to the slowness of the government, the general indifference of the citizens, and the large mass rallies held in the past such as festivals, weddings and political gatherings.

Nepal also has an open and busy border with its southern neighbor.

Now border traffic has been restricted and coronary embargoes imposed on the most critical areas such as the capital Kathmandu.

To date, a total of 377,603 coronavirus infections and 3,579 related deaths have been reported in Nepal.

In India’s southern neighbor, Sri Lanka, with a population of about 22 million, infection rates also started to rise sharply in mid-April.

The then 200-300 daily rates of infection have now multiplied.

The 1,914 infections found on Friday are a few dozen cases behind the record number reported a few days earlier.

Police arrested a masked man on the street in Colombo, the capital of Sri Lanka, on Friday.Photo: Ishara S. Kodikara / AFP / Lehtikuva

According to Health Minister Pavithra Wanniarachch, the cause of the infection peak in Sri Lanka on 13-14

Before that, the authorities had even encouraged citizens to celebrate the New Year all the way to President Gotabaya Rajapaksa, as last year the celebrations were not held due to the coronavirus.

The declining infection curve appeared to have already convinced the authorities that the virus had been brought under control.

Now, 13 of the country’s 25 administrative districts have been imposed a strict interest rate cap.

Throughout the pandemic, 121,338 coronary infections and 764 virus-related deaths have been reported in Sri Lanka.

In the Maldivian island nation southwest of India, new corona infections were counted in less than 100 days before mid-April.

On Friday, 766 new infections were diagnosed in a country with 530,000 inhabitants, which was also a new record.

The Maldives, heavily dependent on tourism, opened its borders to foreign travelers as the first country last summer after a three-month coroner.

In the first three months of this year, about 70,000 Indian tourists visited the country.

Despite the worsening virus situation, the tourism-dependent Maldivian island state has so far not closed its borders to international tourists. Photo: Wolfram Kastl / Zuma / MVPhotos

However, the borders have not yet been closed and the affluent Indians have not stopped traveling to the country.

On Monday, the number of people in need of hospital treatment due to the corona was reported to have tripled in a few days, and on Thursday, the capital Malé region was declared overnight a curfew.

To date, a total of 34,134 corona infections and 82 associated deaths have been reported in the Maldives.

On the Southeast Asian side, the coronavirus situation in Thailand was kept well under control until April, despite the discovery of the first non-Chinese corona infection in the early meters of the pandemic.

Since the beginning of April, the number of new infections diagnosed daily has risen from less than a hundred to four figures.

On Friday, 2,044 new corona infections were diagnosed in Thailand, a population of 70 million.

The worst day to date was seen on April 24, when 2,839 new infections were recorded.

In five weeks, the number of all corona infections detected in Thailand has risen from just over 28,000 to 78,855 cases.

Virus-related deaths have been recorded throughout the pandemic 363.

The worsening of the situation is due to the nightlife of the capital Bangkok.

In early April, it was ordered to close the doors of a total of 196 entertainment centers.

However, the situation was exacerbated by the celebration of the local New Year, during which a large proportion of Thais traveled to relocate and holiday around the country.

The number of daily infections in neighboring Cambodia, Thailand, had dropped to less than a hundred by the end of February, but shortly before mid-April, the situation began to deteriorate rapidly again.

To a record high to date, 938 new infections were reported on Tuesday of this week.

On Friday, 558 new infections were diagnosed.

Volunteers in Phnomh Penh just over a week ago arranged food aid packages to be distributed to residents of the “red zone” designated for the coronary embargo.

The country's government has been accused of leaving the inhabitants of the closed areas to their own devices. Photo: CINDY LIU / Reuters

As early as April, the World Health Organization warned Cambodia that it was “on the brink of a national tragedy”.

A few days later, the capital, the Phnom Penh region, was subject to a strict coronary lock in the midst of New Year’s celebrations and travel congestion.

To date, 18,179 coronary infections and 114 related deaths have been reported in Cambodia, a population of about 17 million.

The situation of Indonesia, with a population of 270 million, differs from the countries listed above, with infection rates peaking at the end of January, when a record 14,518 infections were recorded.

The infection curve decreased to about mid-March, since when daily readings have remained at around 5,000–6,000 cases.

On Friday, 6,327 new infections were registered.

The man covered his eyes when he received a Chinese-made Sinovac coronary vaccine in Jakarta in April. Photo: Ajeng Dinar Ulfiana / Reuters

Based on the figures, the situation in Indonesia does not seem to be easing yet.

Authorities are particularly concerned about the upcoming Mudik holiday, during which tens of millions of Indonesians will travel to their hometowns to celebrate the end of the month of Ramadan.

To reduce the risk, the country’s government has banned all domestic travel from 6 to 17.

Despite this, at least 18 million Indonesians still planned to travel during the Saints, the state news agency Antara said.

In Indonesia, a total of 1,703,632 corona infections and 46,663 corona-related deaths have been recorded during the entire pandemic.