"Total distortion of history": why Ukraine announced significant support for the ban on wearing the St. George ribbon

According to a survey conducted by the Ilko Kucheriv Democratic Initiatives Foundation, conducted jointly with the sociological service of the Razumkov Center, more than 40% of Ukrainian citizens support the decision to ban the public use and wearing of the St. George ribbon. In addition, according to the fund, 32% of Ukrainian citizens, mainly young people, positively assess the activities of the nationalist Stepan Bandera. At the same time, RT sources in Ukrainian political circles doubted the reliability of the survey results, since some sociological organizations, according to them, “are simply working out orders and giving out the necessary results.” In turn, analysts note that due to the policy of the Kiev authorities, the mass consciousness of Ukrainians is increasingly filled with neo-Nazi ideas. 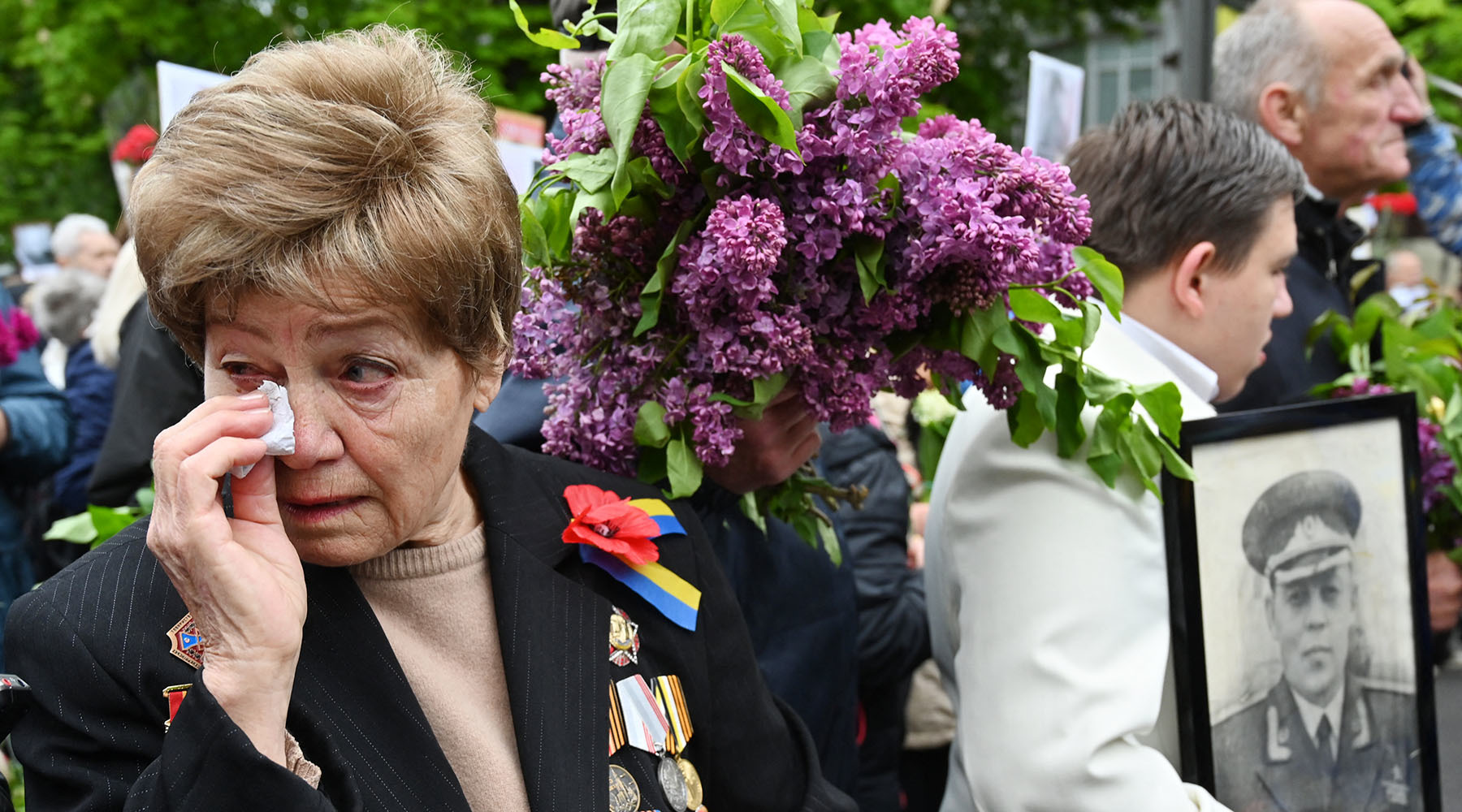 About 43% of Ukrainians support the decision to ban the public use and wearing of the St. George ribbon.

This is evidenced by the results of a survey conducted by the Ilko Kucheriv Democratic Initiatives Foundation, conducted jointly with the sociological service of the Razumkov Center.

29% of citizens opposed the ban, another 16% answered that they did not care, 13% of respondents found it difficult to choose an answer.

“In the western and central regions, the majority support this decision (64% and 47%, respectively).

This decision is supported by the electorate of all parties, except for the Opposition Platform - For Life), ”the fund said.

At the same time, the organization clarified that the survey was funded within the framework of the MATRA project of the Dutch Embassy.

The fund also spoke about the attitude of Ukrainians towards Stepan Bandera.

So, according to the presented data, 32% of Ukrainian citizens assess his activities positively, the same number - negatively.

At the same time, a positive assessment prevails precisely among young people.

“Another 21% are both positive and negative.

A positive attitude prevails in the western region (70%).

In the central region, 27% each consider its activity to be positive or negative, and another 27% - as positive as negative, ”the organization stated.

At the same time, it is specified that the negative attitude prevails in the southern and eastern regions.

"There, the activities of Stepan Bandera are considered negative for Ukraine by 54% and 48%, respectively, and positive - by 11% in both regions," the fund said.

The report, prepared according to the results of the poll, also says that 40% of Ukrainians have not heard about the Immortal Regiment action.

“In the western and central regions there are most of the citizens who have not heard about the action (54% and 45%, respectively).

Most of those who know and have a positive attitude are in the south and east of Ukraine (46% and 35%, respectively), ”say Ukrainian sociologists.

Recall that the law banning the St. George ribbon began to operate in Ukraine in the summer of 2017.

From this time on, it is prohibited to publicly use, demonstrate, wear and distribute the tape and its images on the territory of the country.

Also, in relation to those who do not comply with this norm, an administrative arrest for up to 15 days can be imposed.

In addition, Ukrainian law enforcement officers have the right to confiscate the St. George ribbon, as well as items with its image and characteristic colors.

It should be noted that the Kiev regime in recent years has not limited itself to pursuing one of the main symbols of victory in the Great Patriotic War in the post-Soviet space and beyond.

So, at one time, Petro Poroshenko, while in the presidency, called the participants of the Immortal Regiment all over the world "mummers".

“Victory over Nazism 74 years ago is not a reason to lead mummers' regiments of immortals around the world,” he said in May 2019.

In turn, Vladimir Zelensky, while still in the status of a candidate for the presidency, said in the spring of the same year that Stepan Bandera is a hero for a certain share of the country's inhabitants and that this is “normal and cool”.

According to him, Bandera is one of those people who "defended the freedom of Ukraine."

It is worth noting that along with such statements, the Ukrainian authorities are in no hurry to impede events that defile the memory of the Great Patriotic War.

So, at the end of April in the center of Kiev there was a "March of embroideries" organized by nationalists in honor of the anniversary of the formation of the SS "Galicia" division.

Hundreds of people with flags of various nationalist organizations marched, promising, among other things, "to fight in Moscow."

From the point of view of RT sources in political circles in Ukraine, there are serious doubts about the reliability of the results of a recent poll by the Ilko Kucheriv Democratic Initiatives Foundation.

As far as I know, the MATRA project is just one of them.

But how objective the obtained results are - it is difficult to say, because the action of the "Immortal Regiment" was carried out even in the Rada and was shown on television.

Even representatives of the older generation know about it, so it is strange to see such results.

A natural question arises - who, in fact, was interviewed by the fund? "

- says the interlocutor of RT from the Ministry of Culture of Ukraine.

In turn, a RT source in the Servant of the People party believes that the quality of the opinion polls that are now being conducted in Ukraine is "extremely low."

“It is not clear to whom and how the questions are asked.

Therefore, the results of various opinion polls on the same topic may be directly opposite and contradict common sense.

Some sociological organizations simply work out orders and give out the necessary results.

Hence the attitude to the St. George ribbons, which in reality continue to be worn by Ukrainians, and to the Immortal Regiment campaign, which is known for sure in Ukraine, and much more, ”he explained.

Vladimir Shapovalov, director of the Institute of History and Politics at Moscow State Pedagogical University, in an interview with RT, also noted that the results of a survey conducted by the Ukrainian foundation "do not seem obvious and sufficiently reliable."

The expert also drew attention to the fact that the survey was conducted on the eve of May 9 “absolutely no coincidence”.

“The Kucheriv Foundation and the Razumkov Center are the leading Ukrainian sociological structures, but they have been repeatedly accused of bias, as well as of working for certain political players. And now the fact that the poll was ordered by the Netherlands, one of the NATO countries, only confirms the assumption that these organizations want to please whoever pays. In this case, the customer would probably like to see that almost half of the Ukrainians have forgotten about the feat of their ancestors during the Second World War and are considering history in the context that is now very actively imposed by both the Ukrainian authorities and Western countries, ”Shapovalov said.

He also recalled that almost all the countries of the North Atlantic Alliance take a consolidated position on anti-Russian policy, disavowing the victory of the USSR in the Great Patriotic War and falsifying its results.

In turn, Vladimir Olenchenko, senior researcher at the Center for European Studies of the IMEMO RAS, stressed in a conversation with RT that such polls, funded from abroad, provide a formal basis for the current Kiev authorities to “motivate Ukrainians to belittle the results of the Great Patriotic War and celebrate May 9 ".

“This is an artificial initiative with a notoriously known result, designed to justify the Ukrainian authorities for statements according to which the fight against Nazism was allegedly not the main one during the Second World War,” says Olenchenko.

A RT source in the Ukrainian Foreign Ministry, for its part, claims that Kiev "is trying to rewrite history, so nationalists like Bandera are becoming heroes."

And then what to do with these young people, whose behavior is dangerous?

In addition, Poland has claims on this basis.

And this country is one of the few in Europe who really supports Ukraine.

But so far the state does not interfere in this situation in any way, "says the interlocutor of RT.

Volodymyr Shapovalov, in turn, notes that while the head of Ukraine calls Bandera a hero, "there is a production of certain works of art glorifying this war criminal who committed massive atrocities during the war years", a kind of personality cult will be formed, affecting the adequacy of perception Ukrainians of historical realities.

"In such an environment, it is not surprising that a large number of young people in Ukraine literally with mother's milk absorbed the idea of ​​the greatness and sacredness of this figure, imposed by the Ukrainian authorities," the analyst says.

According to Olenchenko, the propaganda carried out in Ukraine means "conniving at those people who supported the Nazis."

“Bandera and his associates openly collaborated with the Nazis and participated in the destruction of the civilian population.

But in Ukrainian propaganda Bandera is positioned as a national hero, ”the expert says.

From his point of view, Kiev's actions will further contribute to the strengthening of the split in Ukrainian society.

Shapovalov summed up that in Ukraine, "actually passed the red line" regarding the devaluation of the results of the Second World War, which ultimately can lead to "a total distortion of history."

“Thanks to the actions of Kiev, the Ukrainian mass consciousness is more and more filled with neo-Nazi ideas, and the hour is near when Ukraine will forget about the feat of its ancestors during the Second World War, if this policy is continued. It may happen that the country will only remember the actions of a pathetic handful of collaborators led by Bandera, who fought against their fellow citizens, glorified Hitler, and also exterminated Ukrainians, Jews, Russians and Poles, ”Shapovalov suggested.